From The Vault: Transformers: Revenge of the Fallen (2009) 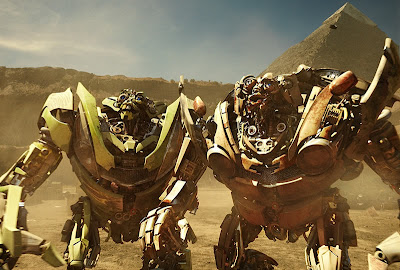 This one's rough as hell. I certainly didn't like this movie and it shows. So this isn't so much a review as it is an angry shout.

I have many complaints about the film. I think it would work best on DVD where you can fast forward shit. Because it feels like 4 hours long, though it's only like 3 and a half. I asked a girl to come see it with me (she had 'plans'....) and I’m kind of glad that I didn’t because if you're going to sit in and poke fun at a shit movie, Terminator Salvation was better because it's shorter, and at the end of this one I get really tired and I got a big headache.

The FX was fantastic. The fight scenes were spectacular. There’s one character, Jolt, who I don’t think you ever see in car form, which is weird, like you see him as a robot and shit but I don’t know. At the beginning there's a spectacular fight through Shanghai, which is definitely worth seeing, and the fight at the end in Egypt has some impressive moments, but it goes on for WAY too long.

That being said that huge battle had some high points, but the pacing is all fucked. When humans aren’t on screen is where the movie shines, but even then it has to be in an action sequence.

The robot dialogue is as fucked as the human stuff. There are two jive talking twin hatchbacks, who both sound like Chris Tucker at his most annoying (“yo, that is some dope ass crap, cracker! Word”). They start out as two halves of an ice cream truck before their upgrade to product placement cars. That and their faces are fucked; they both have these huge googly eyes that aren’t armoured like Ironhide, Optimus and Bumblebee. I’d read that they were ugly stereotypical representations of black Americans, and I agree.

Ignoring the stuff with the negro-bots, there's this Steve Buscemi-bot in the form of a RC truck that Megan Fox captures. Its all Italian, talks like a person, is attracted to Megan fox (more on THAT shit later) and ends up fucking her leg. That bit was completely left field and had no place in the story. It was fucked. So basically as long as the robots are blowing shit up, they're cool, just don’t give them any dialogue. It goes without saying that the acting is intense and way, way too over the top.

Everyone is basically a caricature, and the stuff regarding race is bad. The film is all about American imperialism, and potent American strength. As I said, the beginning takes place in Shanghai (which looks like downtown LA), with the Americans (led by TV's Josh Duhamel) and the autobots working together to take out decepticons, without the input or help from the Chinese. At the end of the Egypt battle, it's Americans all the way, and none of the local Jordanians do much (you'll see what I mean if you see it).

Now, what does this scene seem to mean? That Arabic people think that they're big and important, but in actual fact they are small, pathetic, insignificant people, open to ridicule physically. The main characters are travelling incognito and illegally across borders, so the fact that Turturro says 'New York!' and the vertically challenged goes 'NEW YORK NEW YORK!" and let's them through says two things: the gullibility of the Arabic people, and the potency and the wit of the white American over the foolish, small Arabic nobody, who's rank and importance are insignificant. I think making him a vertically challenged says something of the American mentality of the Arabic world and I think displays basic American teenage boy understanding of the Arabic world.

Now we move onto Leo, the effeminate Latin stereotype. He's portrayed as a doomed and foolish small time entrepreneur, ALWAYS in the permanent pursuit of women, and is an absolute hysterical coward, who is for the most part only concerned with his own well being. Seeing as he’s the only Latin character in the film, as opposed to all the whites (with the exception of Tyrese Gibson, and his three lines of dialogue) he must be a representation of all Latin Americans. I think this is the white American teenager belief of what Hispanic Americans are. 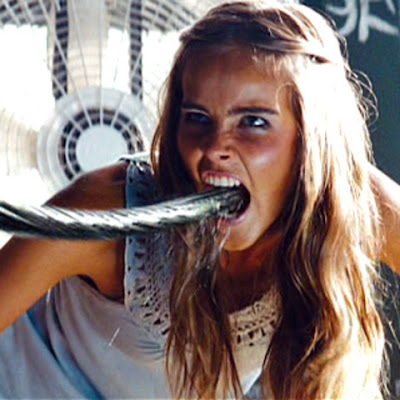 What irks me further is the portrayal of women in this film. There are three women characters: Shia’s mum, Megan Fox, and the Home and Away Girl (H.A.G.). His mother is played (unbelievably over the top and annoyingly) in a stupid and hysterical fashion. She’s shown as irrational and overly emotional, and the ten minute sequence that involves her eating a hash brownie is probably one of the most mundane and inappropriate sequences in this fucking film, second only to the two times you see two dogs of different breeds furiously fucking each other (no joke, this happens). I think this is what white American teenagers think their mothers are like, embarrassing to the point of intense humiliation, overly emotional and over the top

H.A.G. is seen as a huge sluttly whore. She’s seen as forceful and overtly sexual, making forced unrealistic advances on Shia LeBeowulf. This, actually, has a plot point: turns out she’s the T-X from Terminator 3: Rise of the Machines. When she finally makes her move on LeBeowulf, she pins him down and starts kissing him. As she does so her Terminator tail comes out from under her dress, and we the audience are treated to a lingering SFX shot of her arse and, using the vernacular of the white American teenager, her ‘cooter’.

Then we come to Megan Fox, whose sole reason to be in the film is to be ‘hot’. And I’m not even kidding when I say that, because it’s like her whole motivation for the film is to be the hot girl. The way that Bay shoots her is all about ogling her body (that cooter shot from the trailer, as she leans on the motorcycle…) and her glossy lips. During the Egypt battle she’s of course wearing a top that allows us men to see down it when she runs from explosions. Pretty much any time a character talks about her, it’s about how ‘hot’ she is (this is actually the truth; I’m not making this up. Even the robots say it). She’s so hot that a small Italio-bot fucks her leg. I’m surprised for that scene Bay didn’t provide a moneyshot of machine lubricant, just for laughs (like in the first one). The best scene is when the human characters are teleported to Egypt and she wakes up with her face in the Latin Stereotype’s crotch, and he makes comments about how ‘hot’ she is. Very tasteful. 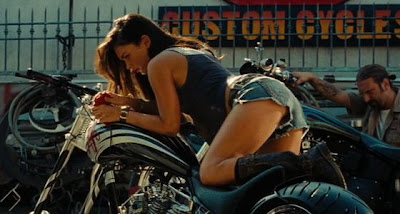 But it’s the role her character fulfils what’s probably the most sexist element outside of the exploitation of her body. She’s the ideal white American teenager’s girlfriend: loyal, really hot, scantily clad, loves cars and is completely unconditionally in love and devoted to her boyfriend. The whole point of her doing anything in the film is in support of her boyfriend, and their subplot (GROAN) involves Shia not being ready to tell her he loves her, and it can be said that she’s preoccupied and determined to get this out of him, which is in my mind a stereotypically sexist portrayal of a woman’s motivations. At one point she's waiting for a 'webcam date' with Shia but he's at a party, so she waits and waits, then flies cross country to see him, because like all good women she's at his beck and call. She’s there to be hot in the film, there to be hot for her boyfriend, and does next to nothing else, that is truly the purpose she’s there to fulfil.

So, in summary, the film works best when Bay is doing what he does best, which is blowing shit up. Anything involving plot or dialogue fucking falls apart. It also becomes quite apparent that the film is targeted at a very specific audience, and that Shia is meant to represent them in the film. The white American teenagers would only laugh at the jokes in the film, believe in the stereotypes and only they can appreciate the unrealistic depiction of women in the film. Oh, and the whole sorry affair ends on a fuckin Linkin Park Song. But what tops it ALL of is the fact that this film, about giant robots rumbling about, is marketed to CHILDREN

PS: the whole plot hinges on magic. I’m not making that up. Well, magic mixed with believing in yourself. You know how it is
Posted by Unknown at 21:13