From The Vault: Camp X-Ray and Hollywood 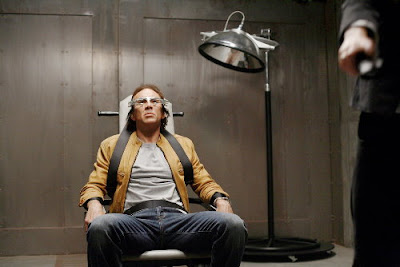 'From The Vault' posts are pieces from the past that I'm digging up to give the blog a bit of variety and because some of them have some nice observations I'd like to share. Some of the posts have been edited so I can fix any grammatical or spelling errors and to seems smarter than I actually am.My 2012 reviews will be more professional, I PROMISE.

This was something that I wrote WAY back on the 26th of September, 2007, and posted it on Myspace. I even impressed myself in that I was, at the time, not at University and to have written an essay (without being made to) was and still is strange to me. I hope you find it enlightening, and it is a bit rough so take that into account, ha.

Films are art. Art reflects the world in which it was created. Art reflects truths that some of us are unwilling to accept. So it is rather strange to find that the shallowest of films, the Hollywood Blockbuster, is where some of the truths of American foreign policy can be found.

Camp X-Ray, along with places like Abu Grahib, were publically disowned by the media. There, enemy soldiers were taken to be tortured and humiliated, and the exposure of both places and their practices shocked the world and highlighted the US government's absolute disregard for basic human rights, and the Geneva Convention (Article 4 of the Geneva Convention Relative to the Treatment of Prisoners of War, to name but one), all in the name of their war on terror. Now enemies of the US aren’t simply imprisoned, they're tortured as well.

The Hollywood Blockbuster seems to have taken this into account. It looks like the age of the pro-American government sentiment in the Blockbuster post-9/11 is over.

Take for example Transformers (2007). In the film, peaceful, friendly Autobot Bumblebee is captured by Agent Simmons (John Turturro) and imprisoned in Section 7's Dam base. Considered a threat, or as they say at Guantanmo Bay, an 'enemy combatant', he is chained down and sprayed with liquid nitrogen. He is freed by Sam (Shai LeBouf) and he is angry, aiming his cannon at his jailers. In this case, though Bumblebee is there to protect them, he is viewed in terms of his 'kind', and captured regardless of his intentions.

In the lesser known blockbuster Next (2007), based on Phillip K Dick's The Golden Man, Cris (Nicholas Cage), who can predict the future, is captured by an FBI agent (Julianne Moore), in order to use his future-seeing powers to help her avert a terrorist strike. They do this by taking him to a shady location (complete with soldiers in uniform), strapping him down to what looks like a torture chair, and using an apparatus to keep his eyes pinned open as he watches the news.

Perhaps the most audacious of these examples of US foreign policy on film is the comic book movie Fantastic Four: Rise Of The Silver Surfer (2007). The Surfer (Doug Jones/ Laurence Fishbourne (voice)), a somewhat peaceful herald to planet-eating monstrosity Galactus, comes to earth to prepare it for its destruction. The US military, headed up by General Hager (Andre Braugher) use Mr. Fantastic (Ioan Gruffudd)'s technological know-how to bring down the Surfer. Once disabled, they take him to a US base in Siberia (perhaps a form of Rendition, a real-life practice where the US export a prisoner to a country where torture is legal, and interrogate them there, without having broken anti-torture laws on US soil). In the base the de-powered Surfer is taken away by the general for an 'interrogation', when a protest is put up by the FF, they are told that the Surfer isn't human, so any kind of human rights no longer apply. They even go so far as to let a mysterious and sinister torturer Mr. Sherman (Zach Grenier) has his way with him. At one point you see some of the torture take place, and hear the Surfer's screams.

The Great Hollywood Blockbuster is utilitarianism film-making - it’s pleasing to everyone. Action everyone likes, jokes everyone laughs at, to hit a big audience all at once. If everyone likes these movies then inclusion of these scenes and scenarios suggest that this darker side of American military foreign policy is becoming commonplace; accepted in the minds of not only the American public, but the international movie-going public as well. In an age where someone like the Dixie Chicks can speak out against their president and have the public turn on them and destroy their CDs because of it, the fact that these scenes haven’t been censored or removed tells us that the general attitude towards American foreign policy has changed.
Posted by Unknown at 04:11