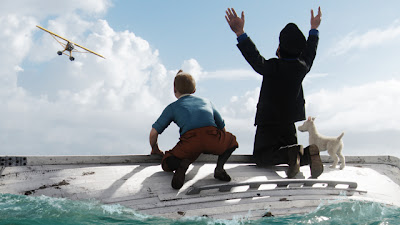 There’s something going on with the world’s biggest directors recently. With Spielberg’s Tintin and Martin Scorsese’s Hugo, they’re creating kids films that are a reflection of what they enjoyed as kids themselves. This is not so much selfish as it is paternal; it’s as if they’re putting their hands on kid’s shoulders and saying ‘this may not be your thing, but you’ll enjoy it, we promise’. Old fashioned stories told in old fashion ways albeit with brand new technology. In this family we can group Abram’s Super 8, though that was marketed more to an older audience than the holiday season kid group that Spielberg and Scorsese hope to woo.


I suppose that’s Tintin’s appeal. For a lot of us over the age of the mightiest filmgoer (age 15), Tintin was an enduring part of our childhoods. The second time I saw the film I saw it with my father, who read it in his day. So although many kids could watch the movie, the majority of the revenue surely comes from the wide, wide adult audience in attendance.


My own personal association with Tintin was back when I was little. There as a bookstore in the Sydney CBD that my mother took me too a few times, and in the children’s section there was a giant, brightly coloured wooden train, parts of which were shelves to hold picture books and Tintin. Like many mainstream comic book fans, our first introduction to the form was Tintin, and he held a revered position in that parents and teachers didn’t look down on Herge’s work as much as they did that of American comics.

Looking at the film the way it is, it’s the era in which it’s set that also sends shivers down my spine. Many of my favourite films growing up – The Rocketeer, The Phantom, The Shadow – were set in the 30s like Tintin is. Likewise Batman: The Animated Series was heavily art-deco inspired, from the buildings to the cars to the noir-ish storylines and dialogue delivery. Another, albeit later, example is the first Mummy film of 2000, with its old Hollywood monster movie style with modern special effects. So I suppose I’ve always had nostalgic love for that era.


What is it about that time that screams adventure? Sandwiched between two wars, perhaps there’s an excitement of an expanding cosmopolitan world. Europe was easily traversed; Asia remained an exotic yet somewhat accessible region. Salty seamen, courageous pilots and intrepid detectives filled the pulp stories and comic books that inspired the children of World War One. Things were done differently then; real men relied on their wits and experience. When Tintin wanted to learn more about the history of a ship called the Unicorn, he went to a library not Google. When he wanted to contact the authorities, he used Morse code, just one of many worldly skills that real men, most men of the time, knew. He also has an interest in model ships, another old fashioned touch that perhaps our grandfathers would have related to more than today’s app obsessed youth.


In my second viewing of this film I noticed something about myself, perhaps where I came from and the heroes that I idolized, now and in my youth. There’s one scene where Tintin is on the ground, and a henchman rises from a staircase in front of him. I naturally wanted Tintin to shoot the man in the head right there, but Tintin chose to punch him instead. Perhaps our standards these days are different; perhaps this is more a reflection on me more than anything else. 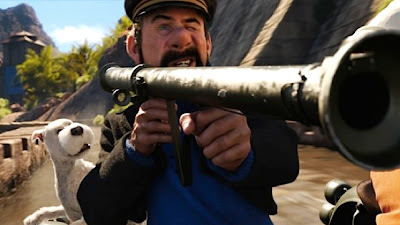 This also reflects on the sidekick, Haddock. It surprised me in watching the film the portrayal of a drunkard, an ashamed alcoholic and his addiction. There are character motivations, jokes and plot points centred on alcoholism and sobriety, which was surprising to see in a kid’s movie. One scene in particular, where Haddock is wrongly accused of getting drunk, is a bold representation of addiction and the loss of trust that it brings to those closest to the addict. I know situations like this personally, and associated myself with Tintin immediately. It’s a small footnote of a scene, perhaps an attempt by the filmmakers to distance themselves from any accusations of glorification, but its moments like that that remind me of the era in which the original stories were written and in which the film is set. It wasn’t uncommon or taboo to have a drunken protagonist. I have a feeling the 30s/40s were an age of maturity in young readers; perhaps there wasn’t so much of a moral panic in regards to the influence of comic books on young minds, particularly in Europe, that is to say no one, kids included, were worried a Tintin comic would lead to the bottle.
The old fashioned story telling style of the film also lends to the ‘paternal’ element I mentioned earlier. The pacing of the film is slow at first, with intrigue and character development. I felt, in both screenings, the kids in the audience grew restless at this point. Time and investment is the name of the game, as the second half brings the humorous excitement of the ship escape (the ‘stealing the keys’ scene made me laugh loudly both times) and the chase down the hill in Morocco (worth the price of admission alone), as well as one of the best sea battles ever committed to screen (better than anything in the Pirates of the Caribbean series). Perhaps this is what storytelling was like back then, for young boys – an act of patience with a rewarding conclusion.  Almost like building a grand model ship (“double decked, triple masted, fifty guns...”), the intended audience of the original stories had a greater patience for such pacing, unlike kids of today.
So, while the film can be most certainly watched my kids, it’s not really for kids. The style and subject matter are for older audiences, those willing to appreciate things. Its major contribution here is its trade in nostalgia; it feels good to reminisce about times of innocence, whether it be the 1930s or our own childhood.
*****stars
Oh, and I fuckin love Snowy.
Posted by Unknown at 19:31