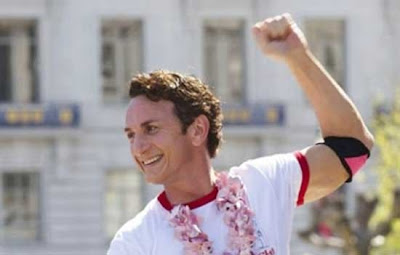 Back in 09 my friend Avril and I would have coffee and talk about movies a lot. When we didn't get time to meet up I would write some reviews on Facebook and send them to her, as recommendations.

Now, these reviews are pretty sassy. I used to drink back then (I didn't have a problem, I just don't drink now) and they're laden with swearing. Many of them (like the Transformers 2 one) are really full on and  aggressive at times, but that's because they're more personal communiques and not a proper scholarly review. I often focus on the acting because my friend is an actress and we discuss these things. These reviews have been edited for cohesion and to remove any personal messages and I'll annotate weird stuff that I don't understand I wrote 3 years ago.

I went and saw milk yesterday, I loved it. I was thinking of the review I read of it, that some of the criticisms of the film is that they make Milk out to be a saint, which can be seen in some of the choices of shots, music etc. but the added stuff about him using Jack White and that fucking annoying Italian boyfriend, how he really shouldn’t have hooked up with him but he did, serve to paint him as flawed I suppose. I detected an air of almost childishness in Penn's performance, like he imbued Milk with a kind of youthful enthusiasm and hopefulness. James Franco was stellar; I thought he was wonderfully subdued, not over the top, a lovely presence. I like it when gay characters aren’t portrayed as overly stereotypically feminine, a la Jack from Will and Grace. Emile Hersche was fantastic at first as that curly-haired guy, when you first see him he was amazing, I didn’t recognise him. He kind of de-evolved as the only dude on Milks staff to swear (What was I talking about? I seriously can't remember the film at all). I was strangely attacked to Alison Pill as their lesbian Anne, even though her hair was funny. And Josh Brolin is continuing to make himself one fucking incredible actor, and that scene at Harvey’s birthday when Brolin was drunk was one of the most convincing drunk performances I’ve seen (and I was knackered the night before) (What a dick I was)
I think there was some subtext in the film in regards to cameras, to how things are perceived, history through a lense. Van Sant uses a blend of real footage and filmed footage. Some shots are filmed in that grainy 70s news camera style too; in some scenes, Penn is inserted into news footage; that evil Anita woman is only seen on TV screens and in archival footage; that first debate between the Christian-right guy and Milk in the school hall, where their speech is staged yet the reactions were the real life ones. The fact that Harvey owned a camera shop and, after he established the shop, the montages were mainly made up of single photo images cut together (that beer thing at the bars) (I don’t know if my friend had seen it or not, I can’t remember. I think that’s why I’m being vague), some scenes intercut with still b&w photos (the conversation with Franco); the opening montage of the men arrested at gay bars, and of course, at the very end with the actor-subject comparisons before the credits. I think here Van Sant wanted to blend the real with the fictional, in a way either bringing the bio-pic closer to reality or draw attention to the fact that it’s a fictional representation of events, that this is history from a distance, through a lens. That lens conceit is even showed in Harvey's last scene before dying; he is looking at the opera house through a glass window- a lens of sorts.
The fact that Van Sant makes clear from the beginning that Milk will be murdered, coupled with Milk giving his own sort of eulogy, with the repetition of the intimate discussion with Scott in bed from earlier ("I’ll never live to see 50"/"I've never done anything I’m proud of") serves to show the audience that this isn’t necessarily a movie about Milk's life but one about the most important historical moments in his life before his demise; having the film's end revealed at the beginning serves to establish that this is more of a chapter than a saga - the time is limited. I think the use of the real footage and the camera theme makes this out to be more a historical film than a biography.
And now for what I didn’t like. There was an odd moment when there was a montage of people calling each other, each in coloured boxes which multiplied, like the Brady Bunch. I thought that was an odd choice, very '70's movie' in its look, which breaks the historical film conceit. And at the end, with the character/subject comparisons, you see that the casting leant more towards the 'pretty boy with moustache' side of things as opposed to mediocre realism. (Again, perhaps, to draw attention to the fact that it's a film and not fact)
It was good overall. I was seriously expecting graphic sex scenes/man-bush but was relieved to see none. So good tasteful film all round, worth seeing at least once.