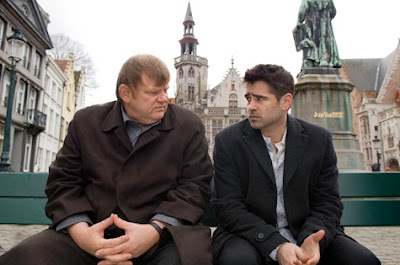 Now this is a treat. I bought this straight away the minute I saw it. It's one of my all-time favourite films I've ever. My friend with whom I was Facebooking these reviews to loved the movie as well, so I gave it another swipe with the DVD and messaged her about it, I was that keen to talk about the movie again. I've since become a fan of Martin McDonagh's, having watched his Oscar winning short Six Shooter, and I've become a fan of his brother John Michael McDonagh, who did fantastic work with Brendan Gleeson in 2011's The Guard. A lot of this is my second/third viewing observations I made watching the DVD. So here we have a proper DVD review, complete with a look at the extras, which is really for fans of the film, for those who haven't watched it: SPOILERS


Oh my god. I fucking love this movie. I can’t gush over it enough, and I know you feel the same way, so I was in a rush to get an early ex-rental copy of it so I can see it again I loved it so much. I just finished watching it and about half an hour of deleted scenes (!) that I want to tell you about. Holy fuck.

I really got the vibe this time around of Bruges being a 'purgatory' and at the end, Ray is in the position of the priest who died, and can see the boy, so it's like he's reliving his crime only the roles are changed. And at the end the movie people are dressed like the painting he likes about judgement, so in the end he's atoning for his crimes. I also realised that the characters who come from England (Harry, Ray, Ken) all go there to die. All potent stuff.

But you know all of this. What I really wanted to tell you about were the absolute TON of deleted scenes, and a few big fucking surprises.

The film is very well paced as is, and what they cut seems to be a lot of scenes of Ray and Ken, either solo or together, observing Bruges. One notable removal involves a scene with Ray eating a strawberry ice-cream, which made the poster (he's holding that and his little revolver) but not in the original cut. Bizarre. But there's a lot of 'killing kids' stuff in there that they cut out, which is confronting, but it's also necessary, because the amount that they left in (which is alot, and not all from Ray) was good enough and to have the rest of it in there would be WAY too over done. It was subtle and under the surface, with too much Ray-talking-about it in there it would seem like whinging, not something eating away at him.

If you remember, when Ray shoots the kid, he sees that the kid is holding a little sheet of paper saying his sins on it, and there's all that brain blood on splattered on it. It’s revealed in one scene that Ray had kept the sheet, and Ken tries to take it off him but he wants it back. There is also a scene where it's revealed why the priest was killed (the church was on land Harry owned and he objected to it being demolished). There’s an edited scene where Ray and Chloe have sex before they go to that outdoors pub by the tower. These scenes were obviously cut because they were too long, over complicated things a little and could be removed without damaging the piece overall.

Then there's the other stuff. There’s a funny scene where a guy tries to start a conversation with Harry on a train to Bruges and Harry calls him a cunt. There's a scene where, when Harry arrives in Bruges, he takes a bit of a sightseeing tour on his own, and we see Harry as a child (!) when he was there that first time, that time that was his happiest memory. Absolutely crazy.

Yet not the craziest. The craziest deleted scene is a flashback. It's a 70's flashback to when Harry and Ken were young. Harry is played by a gentleman called Matt Smith (who is the new Doctor Who when David Tennant leaves in 2010 (one of my fav shows linked with one of my fav movies!!!)) (*It's not even listed on IMDB), and he arrives in a club to find a young Ken (again, very well cast) clutching the body of his dead wife, covered in blood after she was shot. A girl in lingerie covered in blood tells Harry it was Potter who did it.

[[[this is of course refereneced in the scene in the hotel with the midget, where Ken tells him off about his racist comments about blacks and saying he had a black wife. Ray mentions that Harry sorted him out, and made a chopping motion with his hands...]]]

Harry says calmly that he'll deal with it, and tells Ken to calm down. He walks into a police station, where the desk clerk knows him by name (like he's infamous) he says he wants to see one  Mr. Potter (or Detective Potter, the one that shot Ken's wife) and walks into the police office, slips a machete out from his sleeve, walks up to the detective and slices his head off. He turns to the desk clerk that followed him and says 'now don’t go mad, but I think I’ve beheaded your detective" (!!!)

That one was a fucking revelation and a half. A long, violent period film section, with period dress. all of it not filmed in Bruges. Unbelievable.

I could see though why those scenes were excluded. The idea of the film is that Ray finds himself in purgatory, and Ken is his guide, who also wants to save him, though his job is to damn him, etc. right? The idea is that Bruges is a special place, the story should predominately take place in Bruges, as Bruges is positioned as a 'fairytale' place of great importance. To use scenes set elsewhere (like the one with Harry on the train, also the ones with him as a kid, and the ones set in England in 1976) move the action away from Bruges and lessens its significance and importance. The whole film should take place there, and Harry should be less of a full character and more of a force like he is in the film, at first just a voice, then later as a rule-governed, honour driven spectre of death.
I found that the deleted scenes, particularly the 70s one, made the film more of a gangster flick in the vein of Guy Ritchie’s work, or perhaps like the stellar film Gangster No.1. The removal of a lot of the scenes made the film less of a converntiaonl gangster movie into something more thoughtful and well paced, something a bit more emotional and mythical. The drama was heightened, the emotions clearer and ultimately the editor should get an award.

OVERALL
so yeah. those scenes were fun, and really fucking revelatory, but ultimately not needed and the final cut was very much fine without them.

FILM: What do you think? Ignoring the Heath-Hype (surrounding The Dark Knight, this was 2008 after all), Farrel's performance was my fav of 08, as was the film, so *****

EXTRAS: it came with a boat ride around Bruges, those amazing extras and a thing called 'fucking Bruges' which is a compilation of all the swearwords in one vid. Genius
Posted by Unknown at 05:46