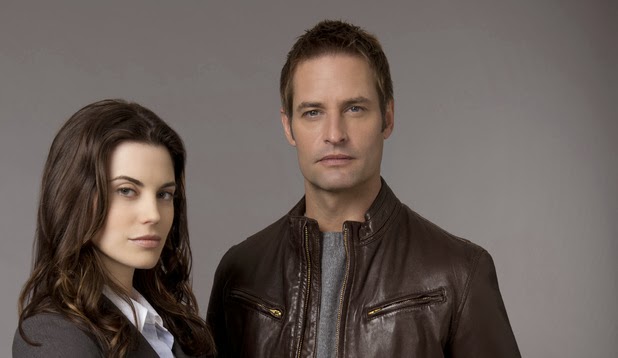 I’ve never been much of a devotee of Lost, though I did watch the first season when it was on television. One character that was memorable was Josh Holloway’s Sawyer, pretty much the TV equivalent of X-men’s Gambit – a charming, handsome arsehole hiding dark personal secrets. Holloway was destined for great things (actually turning down the role of Gambit in an X-men movie because it was too close to Sawyer, go figure) but never got far, save for a few welcome appearances in movies like Mission Impossible: Ghost Protocol. He holds a special place in my heart for being one of the first vampires to be seen and killed in Angel (his second on-screen role), so I’ve always wanted to see him do well.

And here he is in new TV show Intelligence. The story centres around Holloway’s Gabriel, a spy with a high-tech chip in his head, making him a hot spy commodity. To protect him, his boss Lillian (Marg Helgenberger) appoints young Secret Service agent Riley (Meghan Ory) to protect him. I’ll avoid the puns regarding intelligence and lack thereof. The biggest criticism to be made is simply that it’s a TV show. It’s very much a TV show.

Rather redundant to point out, I know. But the pilot is rather aggressive in its mainstream genre TV mediocrity.  The characters don’t pop, the settings are bland (save for one set-piece involving a shootout in a paintball room, which added some much needed colour). The dialogue is stilted and unrealistic, the performances underwhelming and the plot predictable. The word ‘safe’ springs to mind. 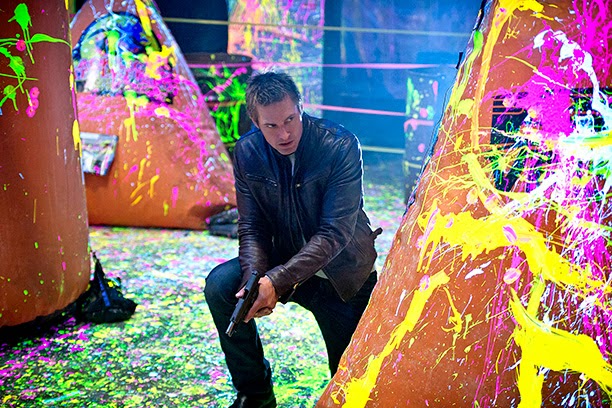 Gone is the Holloway charm. Characters are reduced to caricatures (geeky, wisecracking nerd anybody? Tough but fair boss?) and the romantic tension/friendly rivalry between Holloway and Ory is both boring in its execution as it is chemistry-free. The whole thing is frustratingly pedestrian and again, ‘safe’.

The whole thing could do with an injection of tongue-in-cheek fun. If the characters are to be caricatures, at least paint them with broader, more colourful strokes. Let Holloway do what he does best, let him be a lovable rogue, occasionally sleazy but sexy and mysterious. Play up the fact that a pretty brunette is body-guarding a tall surely superspy, perhaps cast someone who looks less capable as juxtaposition to her actual ability. Spice up the dialogue, sprinkle it with self-awareness; doing so will remind the audience that ‘hey, nothing here is original but we’re having fun anyway’.

What’s even more frustrating is how Intelligence is all very obviously shot in Canada. From the faking of snowy Canadian mountains for Pakistan in the pre-titles sequence, to the abandoned warehouse that I recognise from not only Stargate SG1 but Fringe as well, the whole thing reeks of corner-cutting and low budgets, which is not what you expect from a pilot.

That leads to the one successful thing of the show: the chip. The chip allows Gabriel to hack the Internet and various communications with the power of his mind. The conceit allows him to combine all available evidence to create a virtual recreation of a crime scene that he can walk through. This is used to good effect at the beginning when he relives his wife’s supposed defection to a terrorist organization and her participation in a massacre. Moments like identifying a terrorist as his wife by having a wedding video in a little window playing next to her face as she guns down civilians is a novel way of displaying background information to the audience. They’re also very beautifully rendered, so I guess we now know where the budget went.

The show runs the risk of this being too much like BBC’s Sherlock, what with available information on screen for both the character and the audience to observe, and with Gabriel being a super know-it-all in every situation because of his brain, they’d need to work very hard to not draw comparisons to that superior product. The show is already too much like a combination of Chuck and Person of Interest, it would serve them not to imitate further.

So the show has much potential, if it had a ground-up redo of everything from characters, acting, dialogue and plot. While I do like the central conceit of the show there isn’t much for me to keep watching. Many recent mainstream genre pilots do very little to challenge audiences and do something interesting. Not all shows have the leeway of cable shows like Breaking Bad or Game of Thrones, sure, but many shows have created great work in a mainstream context, for example, Joss Whedon’s oeuvre. 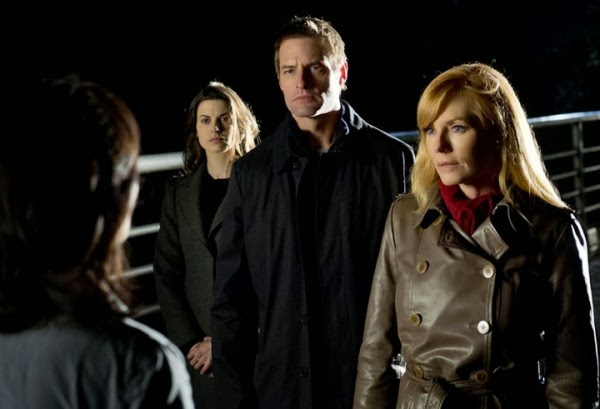 Ultimately there is very little here to justify my continued viewing. Much like the pilots of Agents of S.H.I.E.L.D., Almost Human and Sleepy Hollow (the most fun of the three), the conventions of mainstream genre TV have changed so little since the 90s, where such conventions are so easily identified that the whole thing feels monotonous. What you’re left with is shows that will either get cancelled in no time or will drone on with nothing interesting to say for a few years before vanishing, either way they’re not worth your time. I mean, Almost Human has Karl Urban in it and I still wont watch it. It’s a tragedy when shows that have something to say get cancelled (like recently with the amazing show Boss with Kelsey Grammar) but if Intelligence goes the reasons why are right there on the screen.