As a suggestion from a friend of mine, I’ll keep this one brief as it’s good to get my head around shorter reviews. SPOILERS AHEAD

Wow. This episode was great, racking up the tension, suspense and intrigue of the first two episodes significantly. 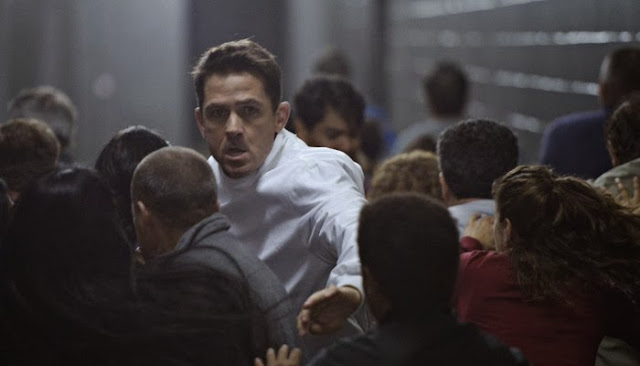 First of all Ron D. Moore’s fingerprints are all over the show, with all characters harbouring dangerous secrets, messed up interpersonal relationships and tensions between groups of people, with double crosses and secret allegiances. I see a comparison forming between the infected people and the Cylons from BSG and how people will hide that important fact from those who trust them. Also, there are many moments of people as a group panicking and acting stupid.

The tension was upgraded somewhat, with the infected, at later stages of the infection, becoming crazed zombie-like monsters, in the 28 Days Later vein. This is another stylistic homage, as the fast-running infected transfer the infection via the mouth, and pin people down and kiss them with black blood. Match this with the ‘infected monkeys leaping out of science cages to attack people’ thing that happened with the pilot and the links are obvious.

Going back to that, the stand-out moment is when a bunch of panicked people are trapped in a hallway with an infected person. Alan, who deplores violence, is forced to shoot and has to live with the consequences, leading to a great scene of drama (even though he doesn’t reflect openly about his brother/wife situation). Jules, however, has a great scene where she talks to Peter (who’s knocked out) about why she cheated on Alan with him. A good moment.

The intrigues are all working well, and new questions are posed for people we thought would have no secrets at all. Soldier boy seemingly switches sides this ep, so we really don’t know what side he’s on. There’s a great moment at the end when one of the main characters finds out that their test for finding out who’s infected was wrong and uninfected people could be trapped down in quarantine. Good stuff all around this time, I’m glad it picked up quite a bit.
Posted by Unknown at 20:56

Email ThisBlogThis!Share to TwitterShare to FacebookShare to Pinterest
Labels: Quickie