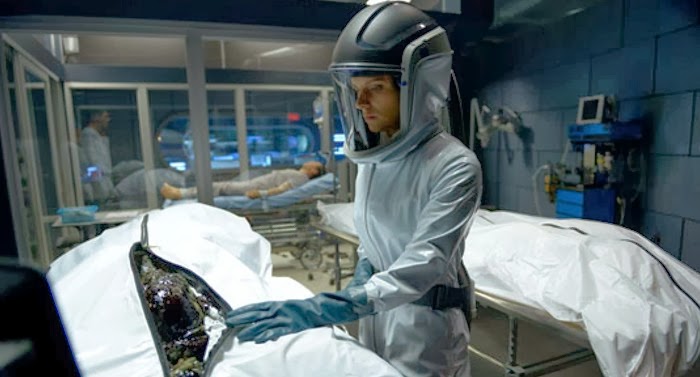 There are some TV shows out there that you wish were simply miniseries instead. By the end of the pilot you question whether or not a show of that kind, with the narrative they have established, could sustain the typical US network series length of around twenty two episodes before it gets super boring and stale. Helix is one of those shows.

Helix, produced by Battlestar Galactica’s Ron D. Moore, tells the story of Alan, (Billy Campbell) a CDC genius virologist who travels to a remote research base to investigate an outbreak in the Arctic with his team, with his assistant Sarah (Jordan Hayes), his ex-wife Jules (Kyra Zagorsky), a sassy biologist (Catherine Lemieux) and a (seemingly) boring army mechanic (Mark Ghanime). At the base he runs into Captain Kaneda/Shingen Yashida (Hiroyuki Sanada) who runs the base as well as his estranged brother Peter (Neil Napier) who is one of the first infected with the mysterious and deadly disease.

The show is in the genre of horror and sci fi, and handles these science fiction elements well. It visually draws its visuals and ideas from things like Resident Evil, The Thing, Fringe and Alien (and if Campbell kept his beard he’s look like Captain Dallas). There’s something refreshing about a cast made up of trained professionals, 90% of which are doctors and leaders in their field. The base itself is outside the scientific regulations of most countries and the multinational group of scientists can play around with the laws of nature to their heart's content. And of course there’s all kinds of secret corporate travesties hiding in secret labs waiting to be unleashed. It’s an interesting starting point for science fiction shenanigans.

There is a wonderful freakiness conceit that I like, where they play pleasant elevator music while something messed up is going on visually. It’s my wish that the freakiness, the violence and the depravity be accelerated ten fold (within the bounds of network television) so that the juxtaposition can be that much stronger, but perhaps that opinion is based on my love of American Horror Story and how amazing that show looks and how well they use music there.

I apprecitate this stylistic conceit as it speaks to a certain attitude of the creators whilst also helping to establish a greater sense of location to proceedings. The vibe they’re trying to establish is one of normality and calm in the face of horror, which speaks to the attitude of the people who work at the base (Peter included) who have to soldier on despite what they know is really going on.

While I applaud those choices I cannot say the same for the visual representation of the base. It should be, for all intents and purposes, another character of the show, and should be very distinctive in its form and function. The outside of the base looks interesting, what looks to be a buried radar-dish-looking structure. There is a central elevator that we see, the window of which gives a sense of the size and depth of the structure, and there is this one hallway that has occasional wood panelling. But that's about it. 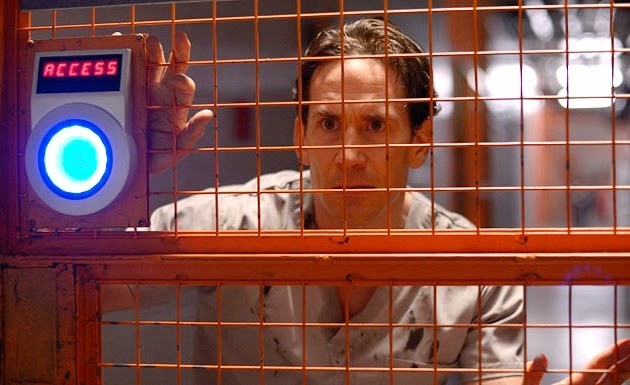 The characters aren’t given much to make them seem distinctive either. Like with most modern genre shows there are typical conflicts and mysteries set up with everyone involved, but the characters do very little to act on those feelings within the framework of these first two episodes.

For example, the lead Alan has to deal with his ex-wife, who became his ex-wife after she was caught sleeping with his brother. He’s become estranged from both it seems up until this mission, but you wouldn’t believe it if you saw it. The decision to act should have been far harder a choice for him, as should be the decision to put aside his baggage and care for his brother. On the surface it seems everything is ok with him, really, which doesn’t feel natural.

His ex-wife should have been drawn a certain way, more impulsive and young and brash, his brother should have been portrayed as someone who is competitive and a real arsehole. It takes a certain kind of prick to fuck his brother’s wife, and on the show Napier’s character looks like someone’s dad (though thats not the case on his IMDB). It seems like we should all question whether or not he’s worth saving from Alan’s POV, which would give weight to his decision to help, but their relationship is under written. They set up potential there for some heavy drama and family conflict but with these first two episodes there’s not much.

And because Allen used to be the Rocketeer, his lab assistant of course is in love with him secretly. I wouldn’t blame her. However, it is annoying to have young female characters solely motivated by love or a crush. Its clichéd and should stop. There needs to be more female characters who participate for their own reasons, not because a man is involved. Speaking of clichés, Campbell’s character is a bit of a globetrotting older wiser heroic adventurer type, though its understated. Shit, at least he isn’t like Jeffrey Dean Morgan’s character in The Burning Zone, who was a rock and roll Cadillac driving virologist. Hey, it was the 90s. 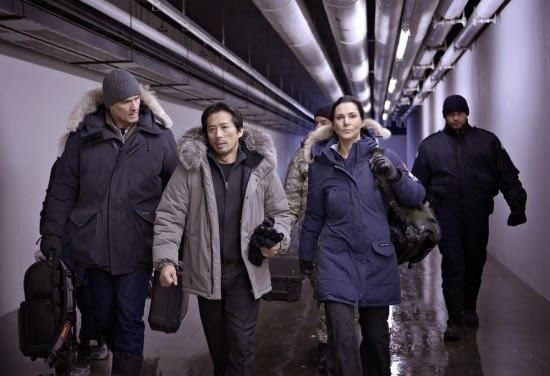 Going back to what I said at the beginning, I wish this show is more of a mini series and not a whole series: there are indications that there are only so many places they can go with it. With these first two episodes we have two incidences of infected people escaping, two instances of an Aliens-esque air-duct crawl around. And while I will admit that I like the show better than most, the potential for a monster-of-the-week format with the horrors hidden in the base dosen’t sit well with me, unless all episodes deal with viruses, then it would take some heavy duty writing to keep it fresh. They'll also need to tease out some of that emotional truth in the characters and do so honestly to keep me around. So we’ll see where it goes.