This is another article that I wrote for Emmet O'Cuana's now-closed website the Momus Report. I'm including this one here as I may write a followup to this season 1 article with a season 2 opinion piece sometime in the future. The original can be found here.

So CW announced they’d make a Green Arrow show called Arrow, ditching former televisual GA Justin Hartley from Smallville with Canuck Stephen Amell stepping in as Oliver Queen. The 2010’s are an interesting time for a ‘Robin Hood’ to operate, with the GFC ruining America and reports of people forced to live in tent cities. The gap between middle and upper class is growing, further, dividing the left and right, rich and poor, haves and have-nots. The end result of this tension is what the US media has labelled ‘class warfare’: a fertile starting point for a show regarding a rich man who fights on behalf of the poor. Does the show seize this potential and use it to its advantage? 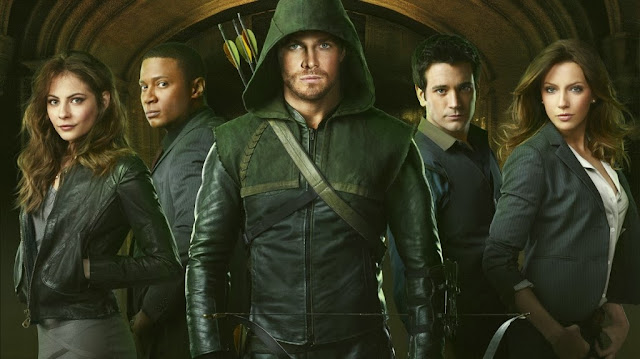 Yes and no. I recall scenes from Looper that could have been reproduced well here, where homeless people wander the ruined streets while detached rich kids line up outside a nightclub; a fitting context for a show with this subject matter. But this very American ‘class warfare’ isn’t explored as in depth or as compellingly as the topic deserves, but is only tantalizingly hinted at.

And that pretty much sums up the show as a whole, full of awesome moments, compelling scenes (often surrounding Amell, who does an admirable job in the lead role) but it suffers from what I like to call the ‘CW problem’.

The CW television network, named as an amalgamation of CBS and Warner Bros., is known for making thematically unremarkable, unrealistic television with impossibly beautiful people dealing with un-relatable scenarios with laughable, fake dialogue. This easy-to-digest populist programming, much of it appealing to women, consists of shows like Gossip Girl, The Vampire Diaries, Smallville, One Tree Hill, etc.

I don’t want to sit and bash the network, nor be someone who rails against the mainstream, because that would be uninteresting. But what I do want to mention is that sometimes this fake mainstream American-TVness of it all, the CW-ness of it all, can be distracting and can inhibit interesting storytelling.

Arrow suffers from this. I don’t mean to be provocative, but I gender this argument because evidence suggests that the show was engineered for a female audience. Take for example the posters for the show. The comic book community can be (sometimes unfairly) associated with heterosexual, homophobic and misogynistic men and teens, so posters of a handsome bare-chested man probably weren’t designed with them in mind [unless they were aiming to score big with the repressed homoeroticism of comics? – emmet]. 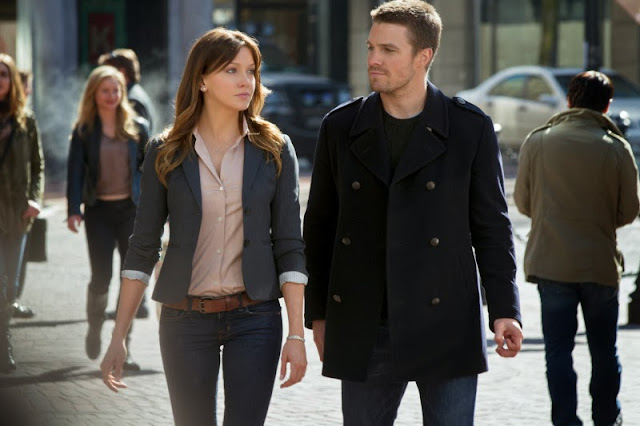 The show often contains soapy scenes, moments that tend to be associated with shows like Gossip Girl, and feel out of place here. The effects are  jarring. Take for example a flashback where fan-favourite villain Deathstroke ties up Ollie, pulls out a huge-ass knife and tortures him by slashing his skin. This surprising and awesome scene is undercut somewhat as it’s just a set up to allow Katie Cassidy’s Laurel to touch those scars on his manly chest before kissing him, in what amounts to an unrealistic scene. I mean this is a show where a lesson Ollie learns is that one must kill to survive; some of this romance stuff doesn’t fit. I think the producers are pandering to an implied female audience, though I have to say, (despite my limited experience with female genre fans), if you just made a brutal, straightforward vengeance show the female fans would have come regardless.

I think my personal problem with the show lies with Katie Cassidy, in both her approach to her character and the writing. Cassidy’s performance can be forced and false, especially when scowling at Ollie or whenever her lawyer character is in court, though she does have her fleeting moments of charm. Another annoying element: Ollie was having an affair with her sister, then took her on the cruise that killed her, ruining her and her father’s life and she STILL wants to smooch him all things considered.  Her character isn’t the most flattering nor the easiest to support in this regard. Comic book and seasoned TV viewers can tell they’ll end up together eventually, but please, wait until a later season at least before they kiss each other. Let him date the Huntress a little bit (which I think he will soon anyway), and let them work their way around to each other.

So I’m hoping the show can sever some of these more boring romantic teen girl romance subplots in favour of action, intrigue and stronger social commentary. Don’t get me wrong, I don’t mind some romance on my TV (I can’t imagine watching Aaron Sorkin’s Newsroom without it) but there are less clichéd ways going about it that can be engaging. I’m hoping that things change a lot in future, and that a) Ollie’s beard gets longer, b) he loses all his money (like in the 70s) and that the show focuses more on those elements. But in all it’s still an enjoyable show, the good scenes make up for the disappointing ones, so perhaps they can only strip back and get meaner.
Posted by Unknown at 20:32