Green Arrow: A History On and Off The Screen (The Momus Report)

Hey guys, I learnt recently that the site The Momus Report was closing for 2014, so I thought I'd share some essays that I wrote for the site's editor Emmet O'Cuana. The original essays were found here.


In honour of the current version of the Green Arrow character presently being personified on the small screen by Stephen Amell, let’s take a look back at Ollie Queen’s history on and off screen, and see how much his various interpretations have changed over the years. 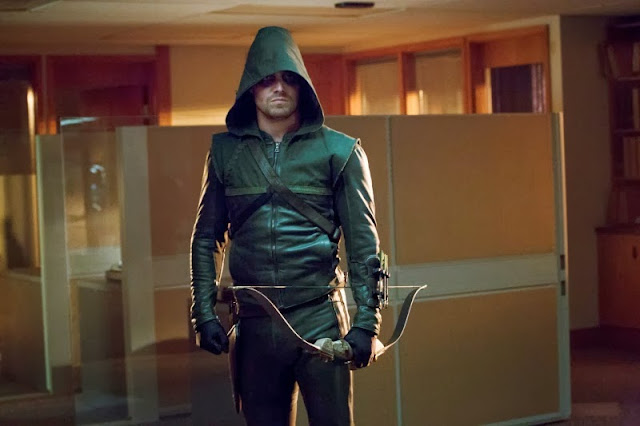 To start, we need to look at who Green Arrow used to be. Created in 1940 by Mort Weisinger and George Papp, GA was a rich kid with rich kid toys, complete with a costume (that then included red elements), Arrow themed gear (Arrow-Car, Arrow-Plane, Arrow-Cave) and a plucky sidekick in Speedy; it was obvious that he was a mirror image of Batman.

Entering the 70s Dennis O’Neil and Neal Adams changed his costume and added a goatee. Oliver Queen had lost all of his wealth and embodied an edgier version of Robin Hood, a leftist who loudly and vocally fought all of society’s ills. With failing sales of Green Lantern, DC Editor Julius Scwartz brought in O’Neil and Adams, who paired Queen with Hal Jordan. Jordan acted as the conservative representative of authority and government in opposition to Queen’s liberal social-change advocacy. It was also during this time that his most controversial and famous story came about; when his former partner Speedy was revealed to be a heroin addict.

The 80s saw Mike Grell take over, placing Ollie into a hard-boiled environment, removing his trademark trick arrows and allowing him to take lives. This period also saw a revision of his origin, suggesting Queen used the thrill of vigilantism to rebel against his upper class upbringing. It was also this period which replaced his feathered cap with the - now preferred - iconic hood.

The 90s were a time for replacement heroes, with Queen dying in 1995 whilst taking on terrorists. His illegitimate son Connor Hawk took over the mantle, as was Jordan’s having gone mad and being replaced by freelance artist Kyle Rayner. DC it turn would subsequently dumped all the good work made with these interesting characters when the originals returned. Kevin Smith resurrected Queen in 2000 and Geoff Johns ‘rebirthed’ Hal Jordan in 2004.

Of these various stages in GA’s long life, you’ll find that he’s mostly represented in two ways, as a high-flying Batman rip-off, or as an outspoken leftist figure, keeping people in line. 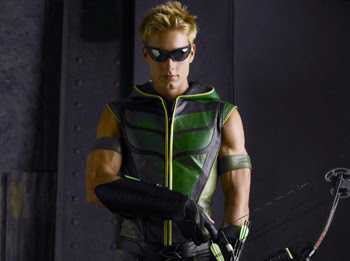 The closest Golden Age representation of Green Arrow is in Batman: The Brave and the Bold’s representation, voiced by James Arnold Taylor. Wearing a costume straight from the Golden Age this GA comes complete with all the Arrow themed vehicles.  His similarity to Batman isn’t ignored as he and Batman have an open and friendly rivalry, racing their vehicles against each other and often comparing their crime-fighting proficiency.  I group Justin Hartley’s Green Arrow from Smallville in this first interpretation of GA as his rich-boy version stood in lieu of a Bruce Wayne in the show; Warner Bros refused to let them use Batman due to the Nolan films coming out.

The other version of Green Arrow, the O’Neil/Adams’ social activist figure, is present in Justice League Unlimited. This version was brought into the team to keep the big characters honest; a self proclaimed ‘old lefty’, the character pulled no punches and threw down with the best of them. Kin Shriner voiced him in the series (and reportedly dressed as Green Arrow for the recordings), and filled him with a loud brashness and sarcasm that was later mirrored in Chris Hardwick’s interpretation of GA in The Batman, as well as in the trailer for the upcoming game Injustice: Gods Among Us. 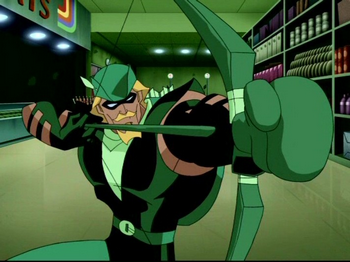 That brings us to Stephen Amell’s version, who actually has more in common with Mike Grell’s gritty 80s version than the others. Aside from the trademark hood, Amell’s Arrow kills some of his opponents like Grell’s GA, and deals with non-powered villains. Indeed, the modus operandi ofArrow is a superhero show without super-powers, reflecting Grell’s insistence that no superheroes make an appearance in his book: If Hal Jordan did show up, he’d be out of costume and using his real name. Grell also refused to call Green Arrow by his costumed identity, and the show has followed suit thus far. This makes him more of a Robin Hood character as opposed to just a straight superhero interpretation.

Some of the older elements still remain however, with Queen still retaining his vast wealth, his desire to tackle social problems at a higher, corporate level. Though this may soon change as his friend and confidant Diggle wants him to tackle smaller crime as opposed to just the higher-ups, it’s a promising sign that the creators of the show have acknowledged elements from across Green Arrow’s vast history to create something that incorporates all his many facets.