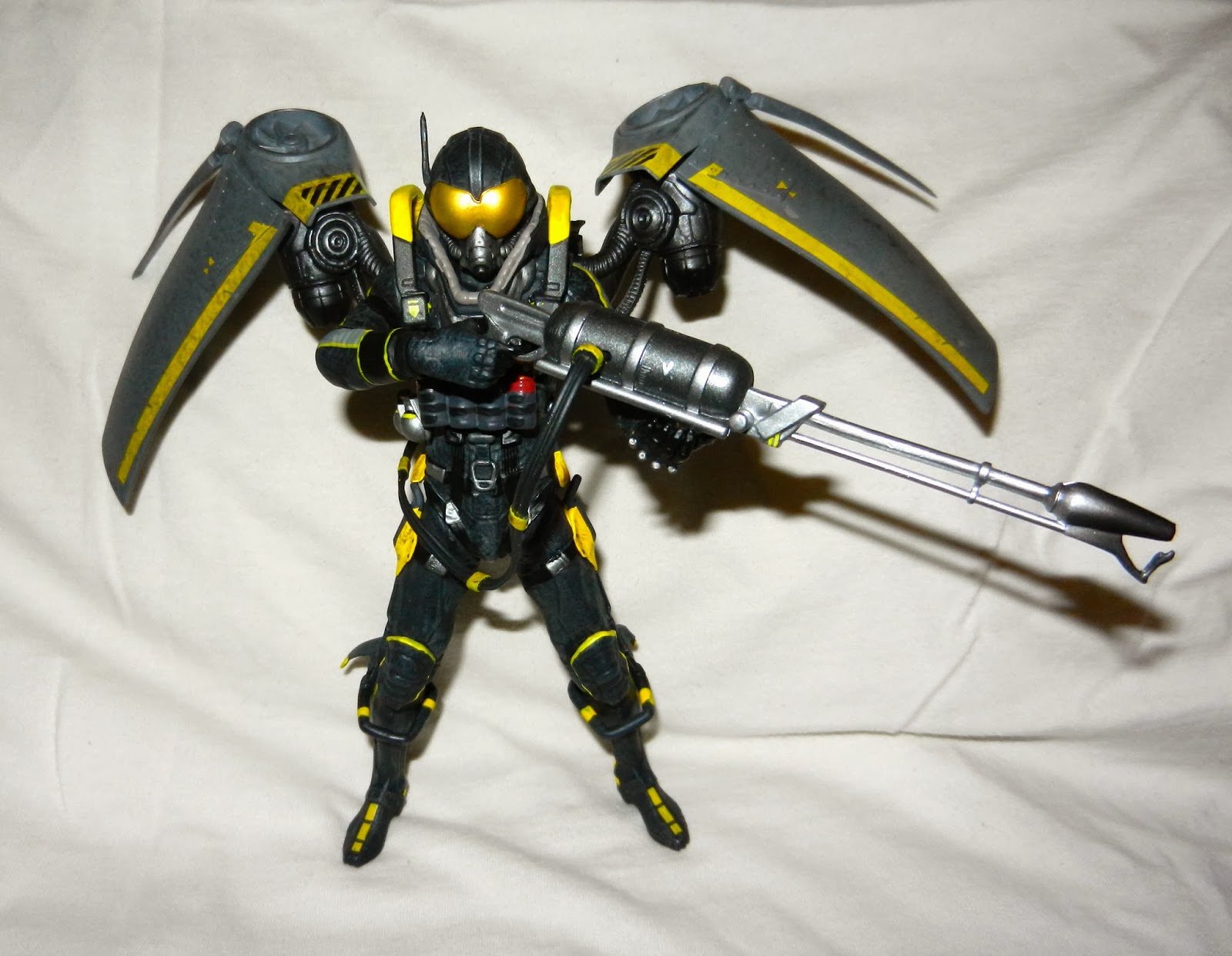 Like a few of the characters in this wave, Firefly had an appearance on TV recently before popping up in the game. Unfortunately his was one of the weakest appearances on Arrow. He was just a slightly burned crazy firefighter who lit buildings on fire, and his ep featured one of the worst fights on Arrow ever, with GA fly-foxing in and essentially getting whupped by a loser dressed as a firefighter. It wasn't his finest moment.

Created in 1952 Ed Herron and Dick Sprang, the original creation was a failed pyro special effects guy. He used a combination of flame and visual effects to commit crimes, so he was closer to Spiderman's Mysterio than anything else. In the game he's a pyro maniac who seems to derive pleasure from burning his flesh, which is all nice and lovely. He's a lesser known Batvillain, but his flame motif compliments the 'elemental' villains like Mr. Freeze and Poison Ivy in the rogues gallery. 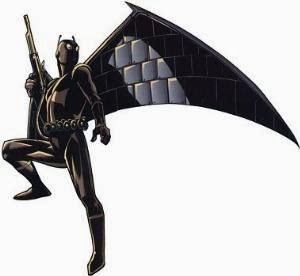 Interesting bit of trivia: In Batman the Animated Series he was voiced by Mark Rolston, who actually plays Deathstroke in Arkham Origins, Lex Luthor in Young Justice and played Drake in James Cameron's Aliens. In Arkham Origins he's played by Crispin Freeman, who is known for playing Red Arrow in Young Justice.

In the game he's a great villain. He attacks Gotham's Pioneer Bridge, and unfortunately, like Anarky and Deadshot, has goons to help him. He bombs a few areas, ruining the bridge as you make your way across and through it. Ultimately he fights you with his flame thrower and fire grenades, all the while taunting you with fire-based puns. Ohh it's annoying. When Bats gets his hand on him he smashes his visor with his fists, exposing his charred and burnt face, (which could turn up as variant in the future) its very satisfying. The whole thing actually has the vibe more of a Spiderman vs. Green Goblin fight than a Batman battle, but that's what makes it great as it breaks up some of the sameyness that a lot of the game tends to have. 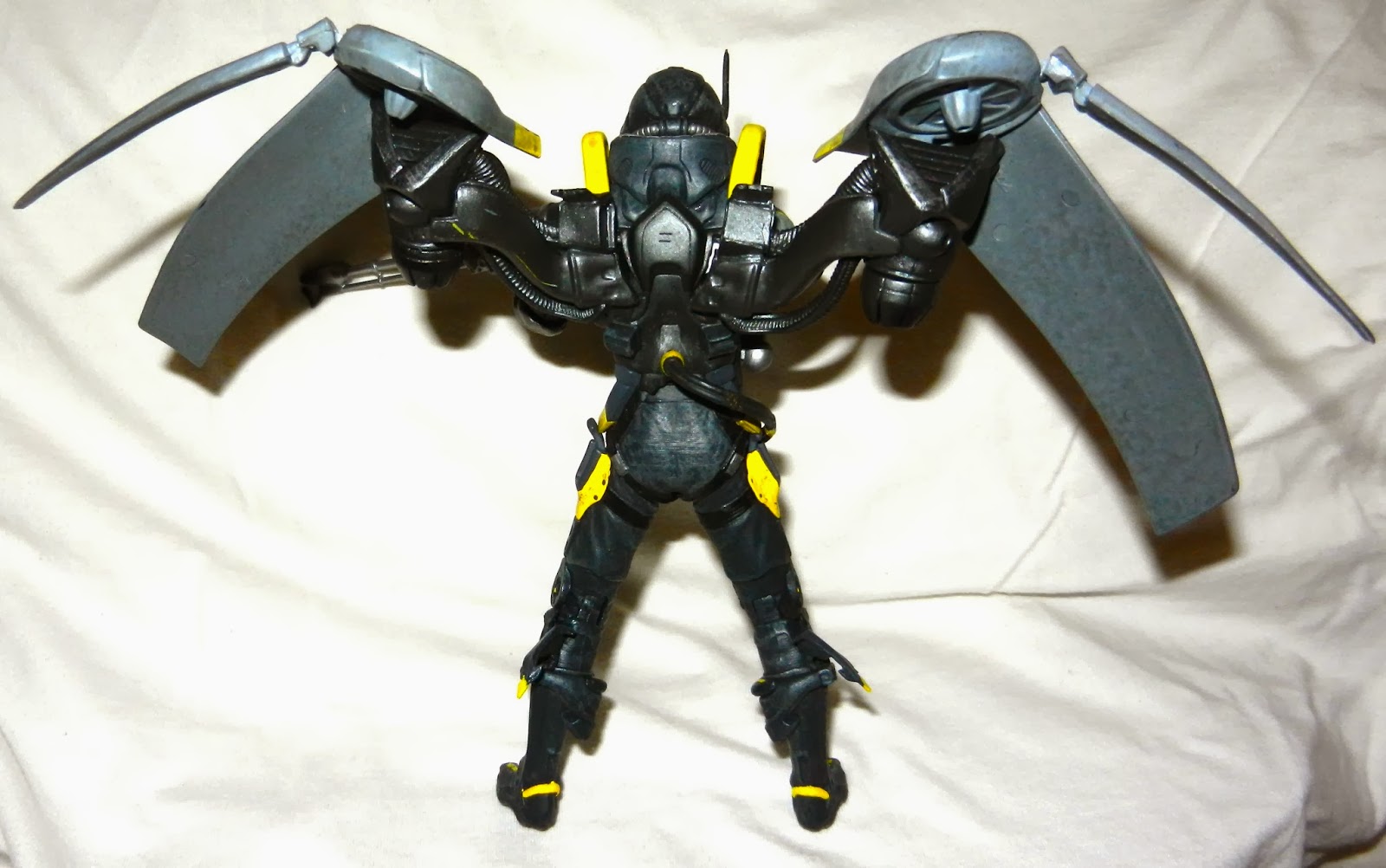 The Design was always a man in a fire retardant suit, with a jetpack. He always leaned more towards a fire guy first, flying guy second, which goes back to the
SFX stunt-man origins of the character. The game switches that, giving him more of a fighter pilot feel, and the fluro elements to the costume call to mind a firefighters outfit. The goggles maintain the 'bug' element. 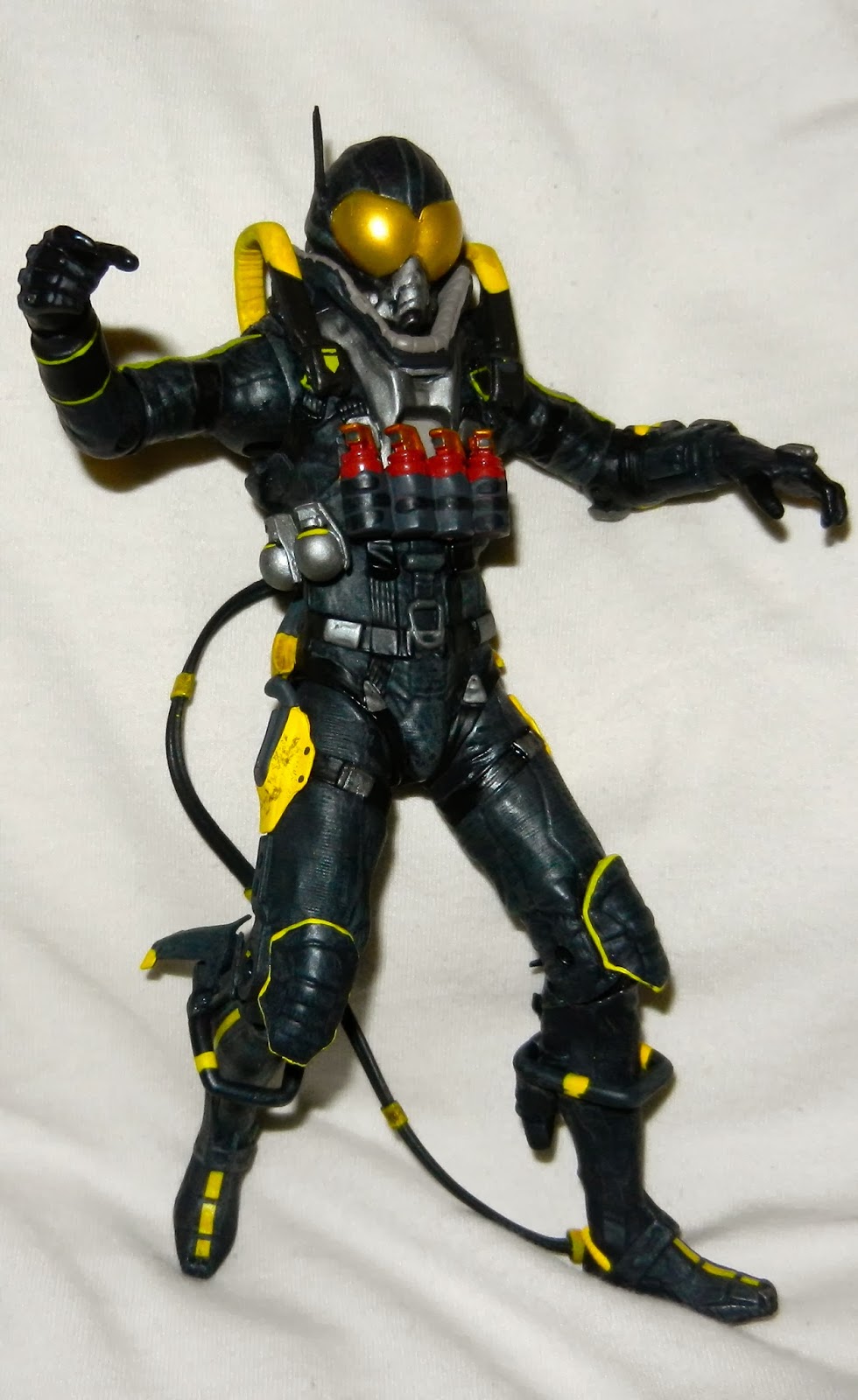 He has ball-jointed shoulders, swivel hinge elbows, swivel wrists, no waist, ball-jointed hips and single hinge knees, no ankle articulation which would be good for flight poses. . His trigger finger is unaccommodating for the flame thrower's trigger. The ball-jointed head can't move because of the high, stiff collar. Its all disappointing, especialy compared with Deathstroke and Anarky.

His accessories are his jet pack wings and his flamethrower. The wings are very well done and have a nice techy futuristic feel. Nice paint apps of the yellow warning areas make them pop. They slot into the back, but I've had to bluetac one of them in as it's a bit loose. I wont glue it as storing it may be a bitch in future. The cord connecting the flamethrower came out of mine, which I dont think was intentional, but the thing with the articulation being so limited is that you can't get him in any poses outside simply holding the damn thing. 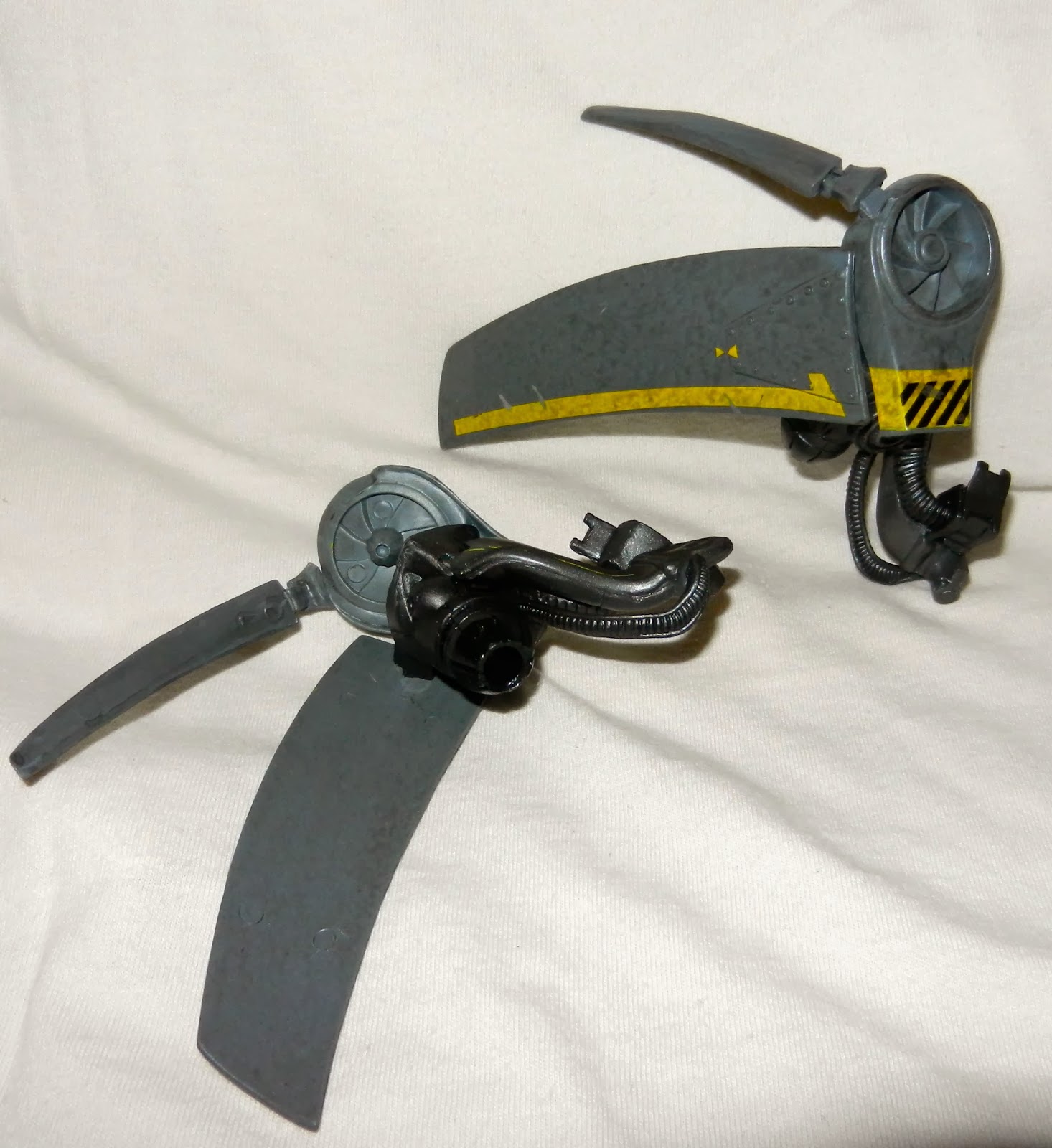 So yeah, a big step down in terms of articualtion, but the wingspan is impressive and the sculpt makes up for it. He's basically what you wanted out of this version of the character, so if you enjoyed fighting him in the game pick him up, but for the casual shopper you can give it a miss. 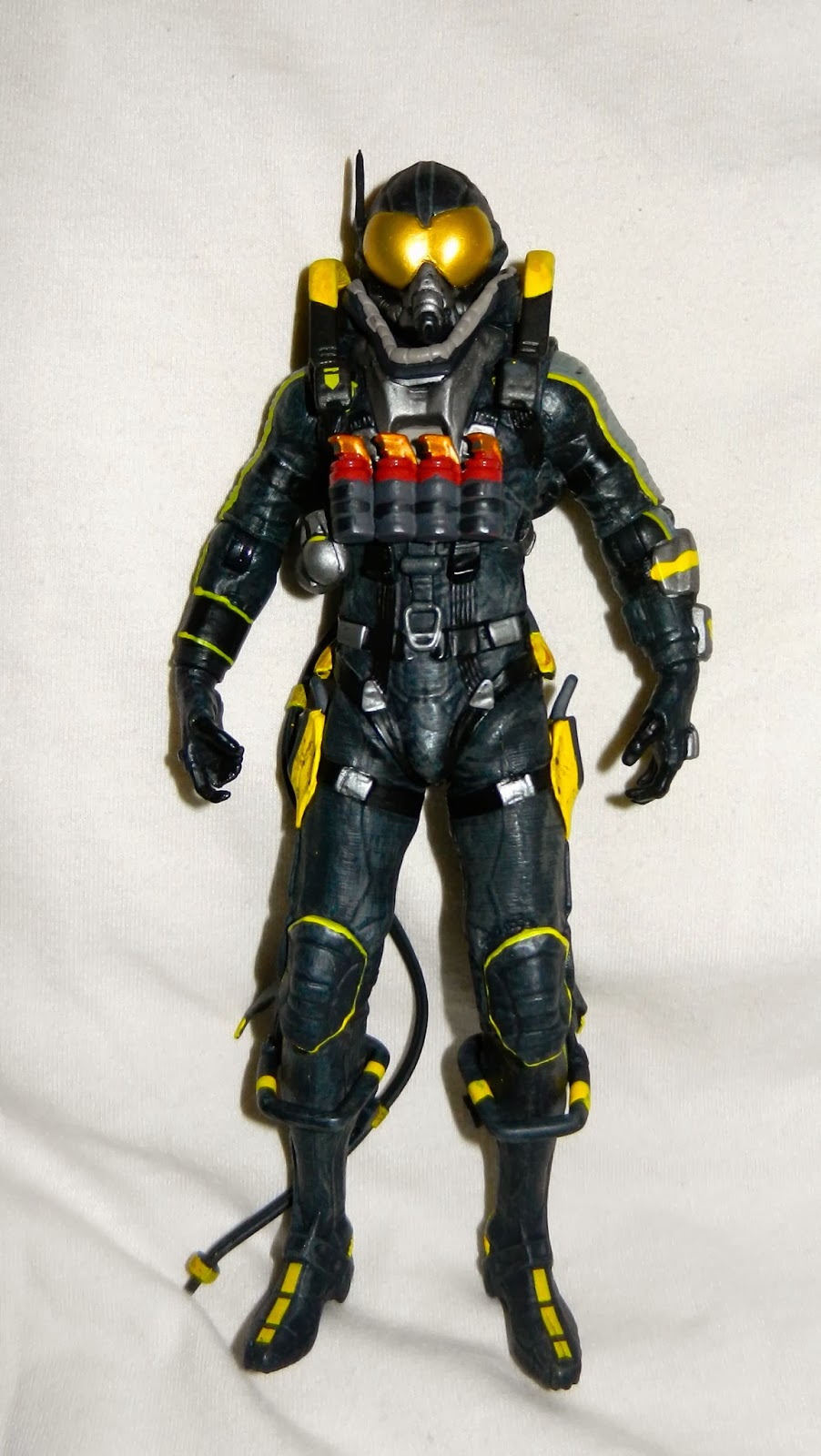