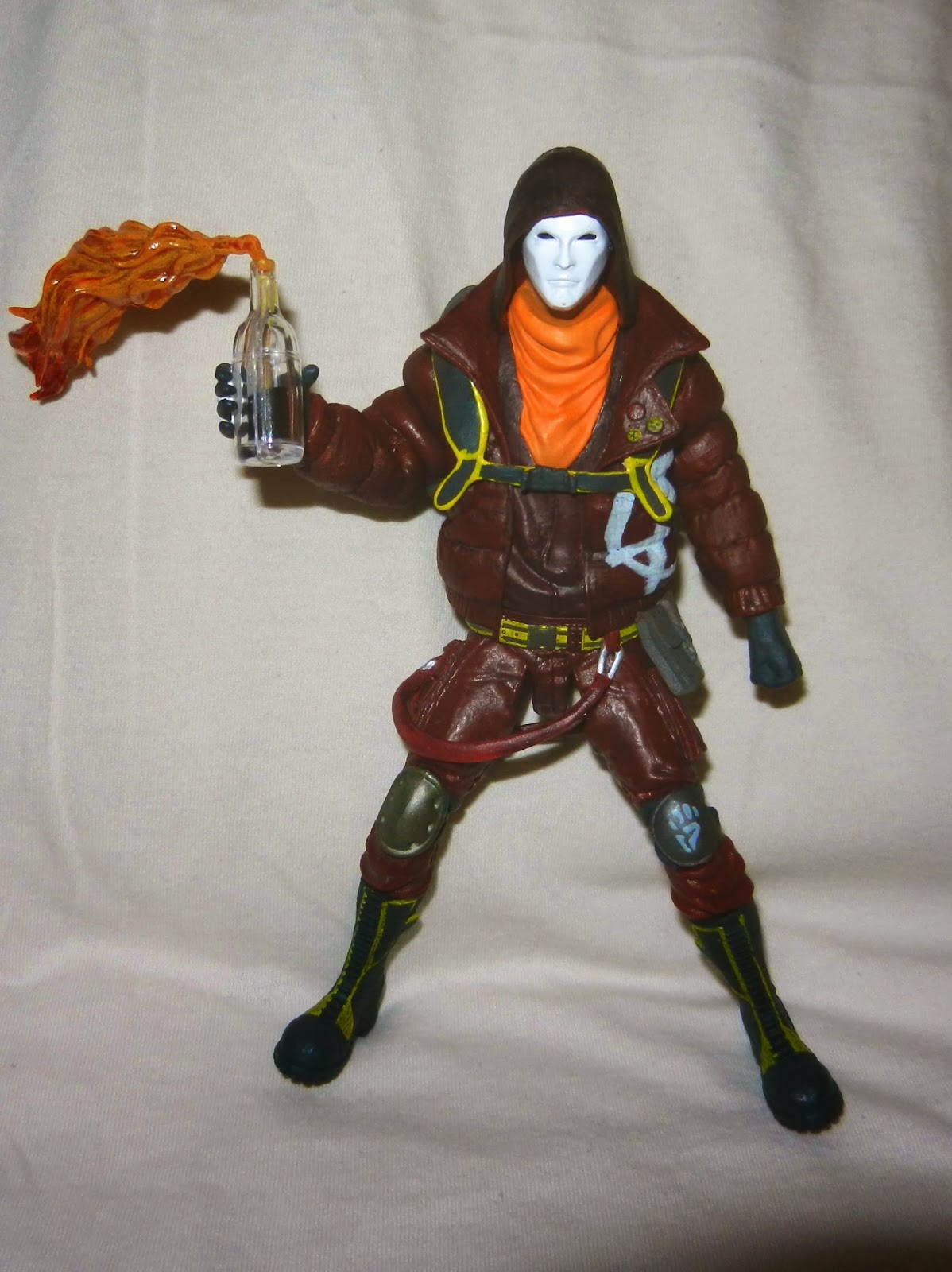 Arkham Origins is a game that makes itself hard to love. A good game overall, interesting story with great interpretations of classic characters, but with largely samey gameplay and a litany of bugs so annoying and game breaking that it’s shook my confidence in new games and consoles and everything technological for fear of day-one screw ups and unplayablility. But I digress.

2013 was a good year for Anarky. He got an appearance in both a video game and in the TV show Beware the Batman. In that show his costume was classic looking, retro outfit in all white. The first episode Anarky shows up there’s a reoccurring chessboard motif in the visuals, with Batman’s all black, representing order, with Anarky’s all white representing chaos.


But this badboy represents Lonnie Machin, a teenage anarchist who rebells against the corrupt system of Gotham City and contemporary US society as a whole. Created in 1989 by Alan Davis and Norm Breyfogle, Anarky was originally a crazy improvisor, who would cause chaos and unrest, making it up as he goes along. In the game he's a manipulator with thugs who plans ahead, but the idea, in spirit, is the same. This new version represents a modern, more up to date Occupy Wall-street/Anonymous reinterpretation, and with that he gets an updated costume. 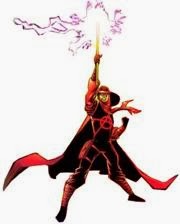 The original costume was a long scarlet hood with a had on top and his identity obscured by a white, blank face mask. That silhouette is maintained, without that hat, but even more so the design incorporates all that Anarky represents in this new context. He's wearing a hoodie, which these days represents not only rioting, political unrest and chaos, but or teen criminality. The imagery of the hooded teen and the danger that represents now replaces the mohawked punk as the iconic image for the-teen-thug-as-moral-panic that has been represented in movies like Attack the Block, Harry Brown and Dredd. He's also wearing a bright orange bandana around his neck, so he could pull it up over his face if he wasn't already wearing a mask. So, in short, it works for him.

He's wearing a thick padded jacket, which again works for the character. The original costume was interesting as he wore a rig that elevated the mask above where his head should be to make him look like a man, and not a scrawny teenager. The padded jacket fulfils this purpose as it disguises his actual body shape. It's a great way of streamlining and updating his silhouette. Add to that he's also carrying a backpack, further driving home his teen appearance.

Now to the figure. DC Collectables has upped their game from series 1 in paint, sculpt and articulation overall. Series 1 which featured and great articulated Batman, but with barely articulated Black Mask and Joker. Bane had good articulation, but was hindered by the sculpt. Some of those issues are present in this new series, but never the less, Deathstroke and Deadshot (which i'll review later) turned out pretty great. 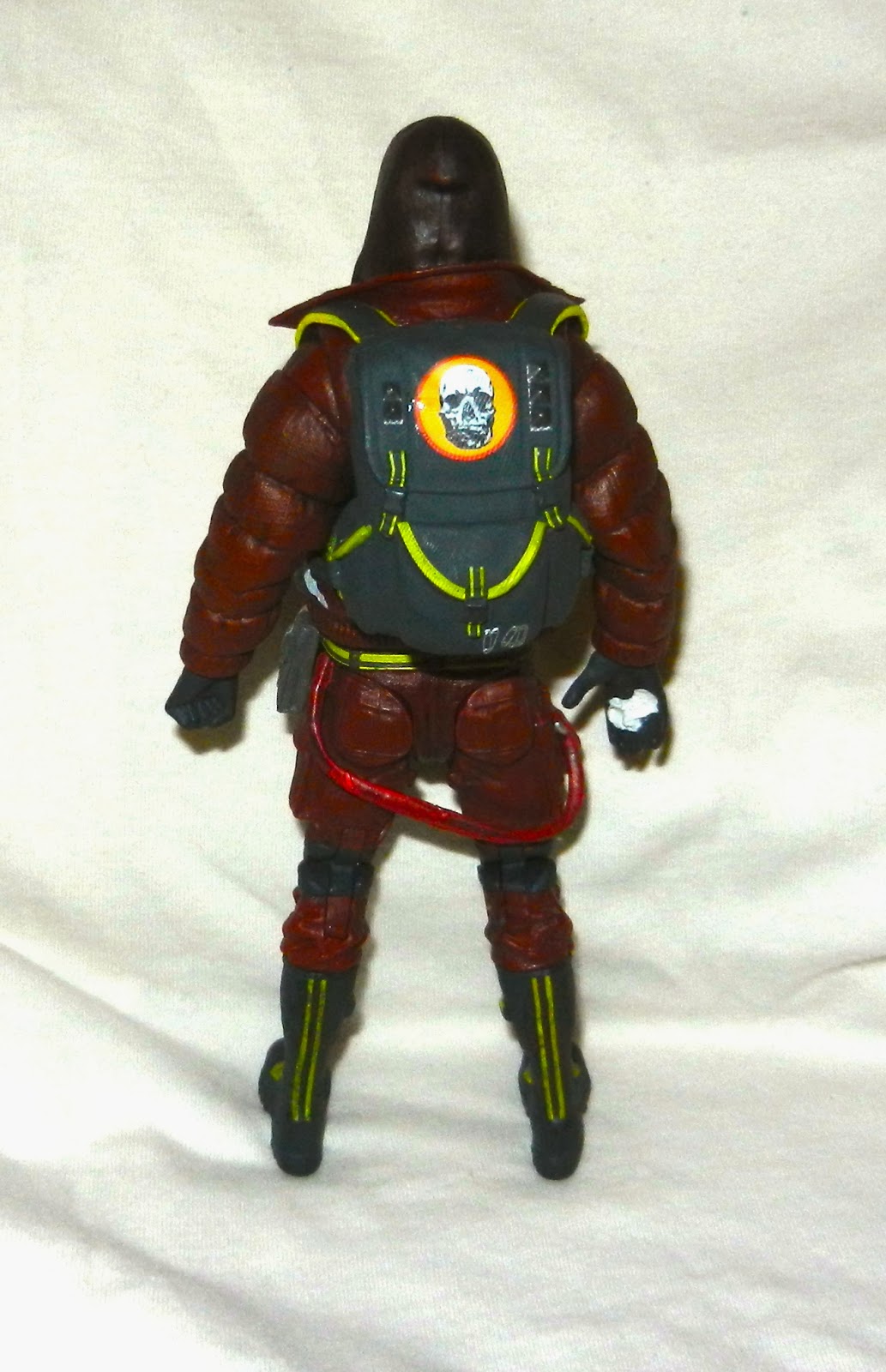 The paint is impeccable. The figure is cast in that lovely dark red, with a bit of a wash to bring out the details. The mask is a smooth glossy white, and all details are covered, from the straps on his backpack, to the buttons on his jacket, to the rage-against-the-machine fist on his kneecap to even the safety pins hanging on the backpack you wouldn't notice unless you looked. It's impressive work.

The articulation is good. He has swivel wrists, hinge elbows, balljoint shoulders and head, swivel waist, swivel hinge crotch joints (which is a great new thing DC Collectables is doing. DC Direct was famous for not adding them and they're showing up now more and more since DC Universe Classics died). He also has double hinged knees and a boot-cut swivel, no ankle articulation.

Now's a good time to mention that he's made of mixed materials, with a lot of important parts of him made up of a rubber-like substance. His hood is made of rubber, and can be exposed to show his shaved head and sculpted ears. The bag straps, loose suspenders, belt and pouch are soft, but the most impressive bit is the sleeves. Those sleeves of his padded jacket are soft rubber with skeletal, clear plastic arms underneath for articulation. The design is preserved and the articulation is present. It's something no one expected or asked for but it's a nice surprise. And when i sat the sculpt is amazing, believe it; there's multiple textures throughout, all individually sculpted, even the rubber sleeves have the same texture as the hard plastic jacket. 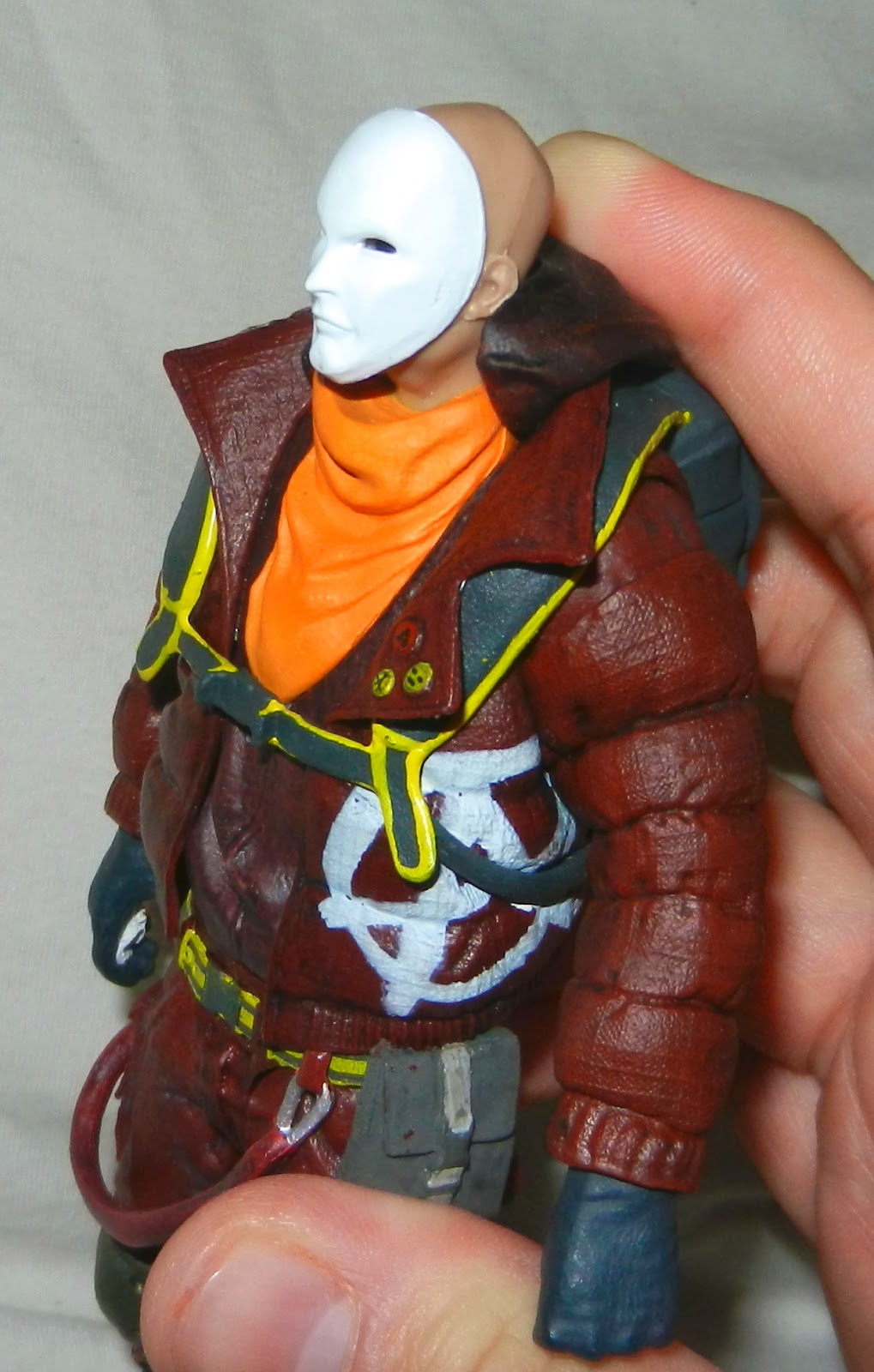 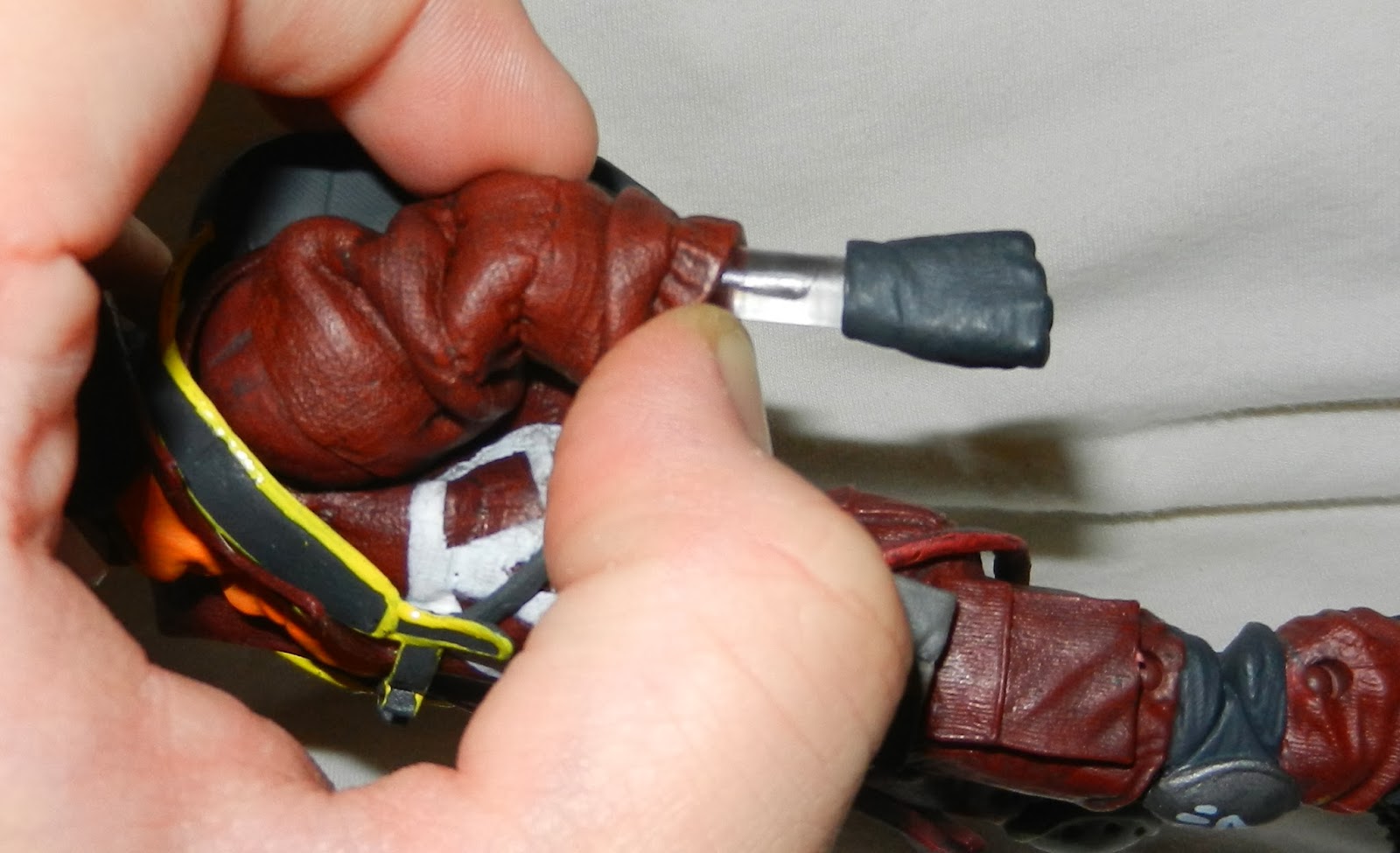 The only accessory he gets is a molotov cocktail, the classic tool for a chaotic rioter. The accelerant looks to be a dark liquid of some kind, and the fire trail out the top is painted and made of clear plastic. It's a cool accessory, but not the greatest. His open hand can't hold it all that well, as the flame affect is too heavy and the hand too loose, so it falls out a lot. The link between the flame piece and the bottle is very thin and I could see it breaking sometime in the future. It's great that he has it, and when you face him in the game he lobs them at you as you face his goons.. Another great accessory would be a purple stun stick that he fights you with, but this will do. 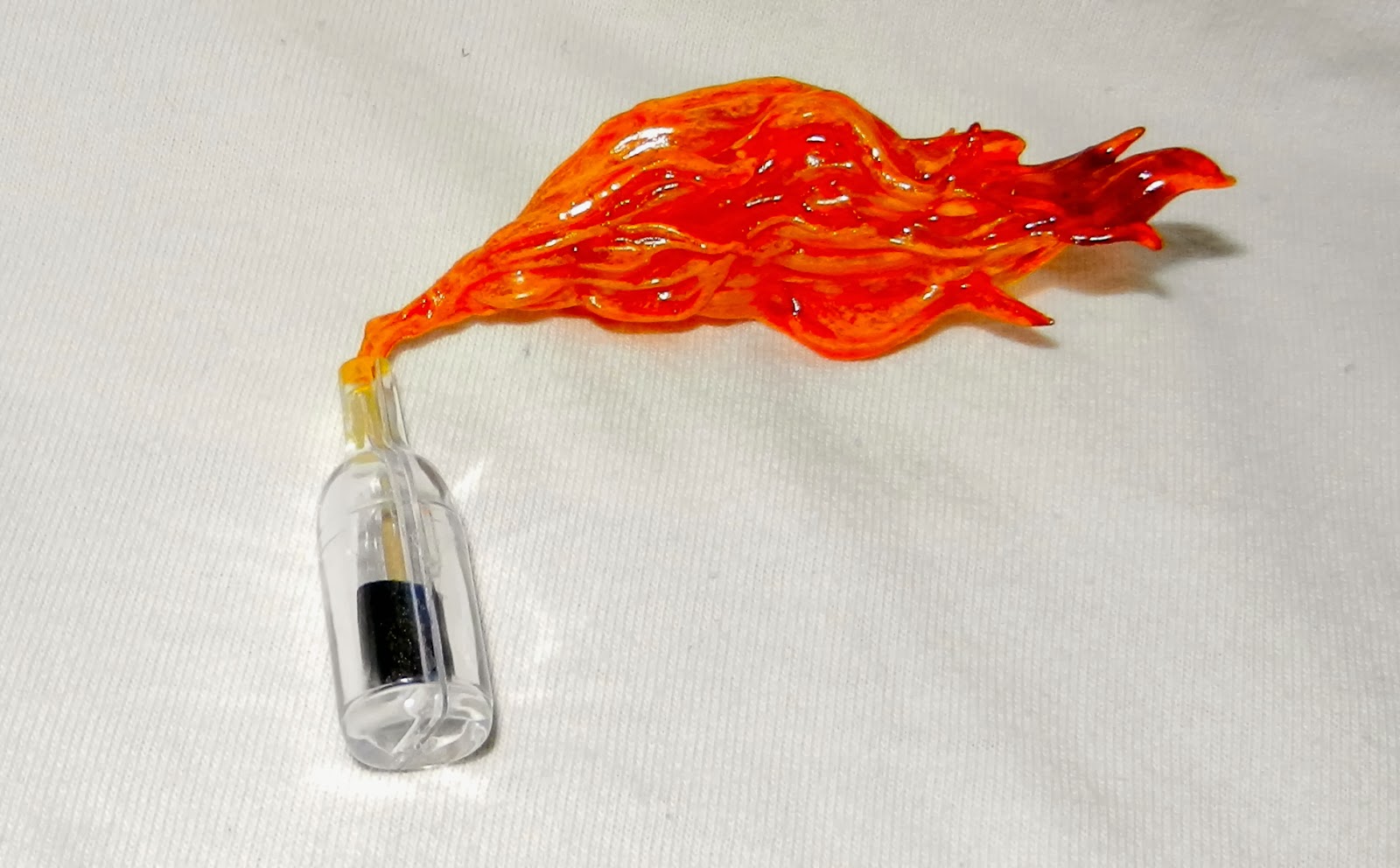 So, all in all a great design recreated in a surprisingly good figure and worth it if you can pick him up. He seems to be packed like 2 to a box. Deathstroke is the 'Batman' of this wave, so he's packed the most and Deadshot's packed the least, and everyone else is in between.

Say what you will about that infuriatingly broken mess of a game, but the characters and the designs were great, and now the figures are too. It seems like DC Collectables have moved into a NECA-like production level with sculpt, articulation and sculpt, and I couldn't be more pleased. 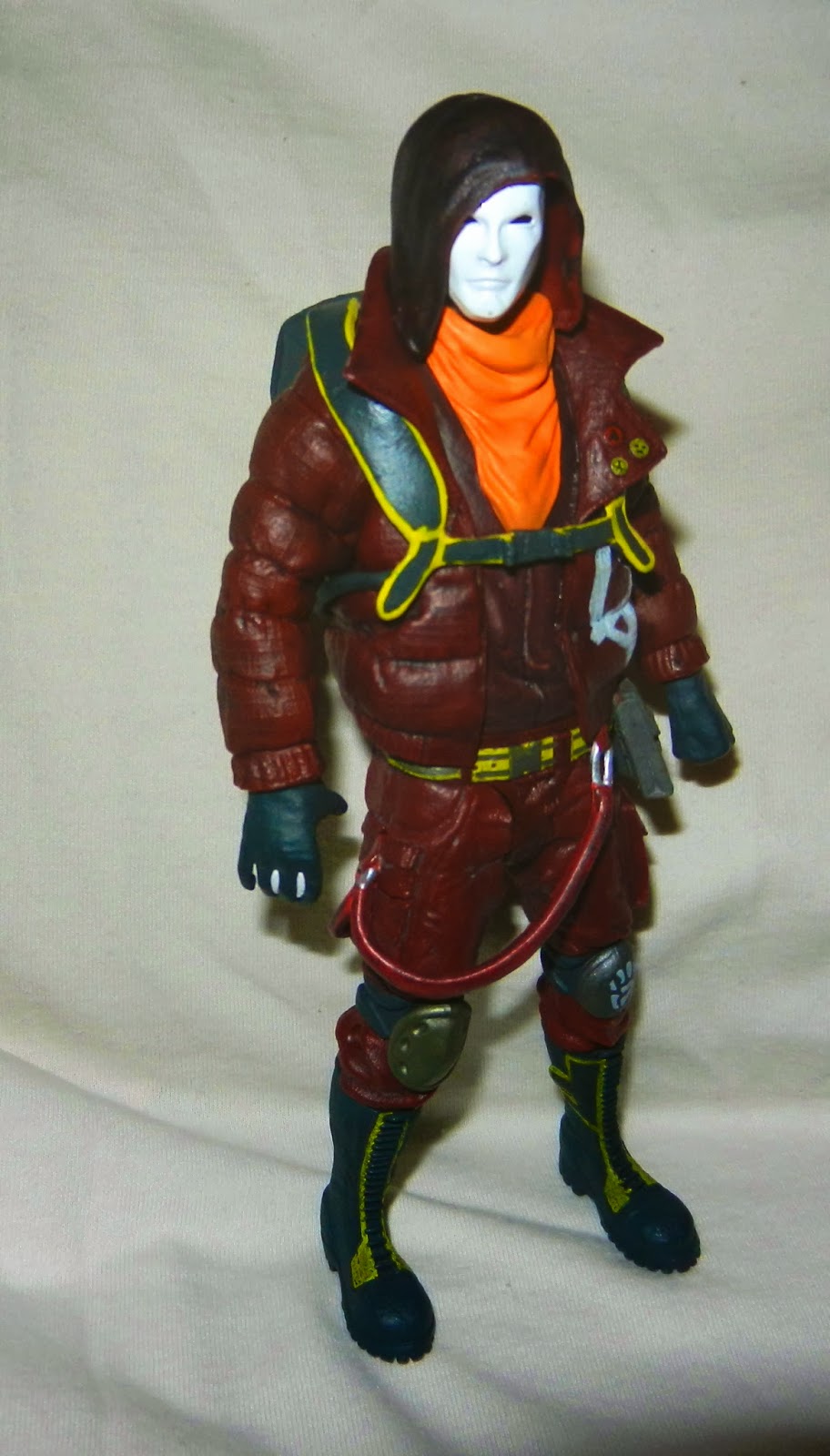