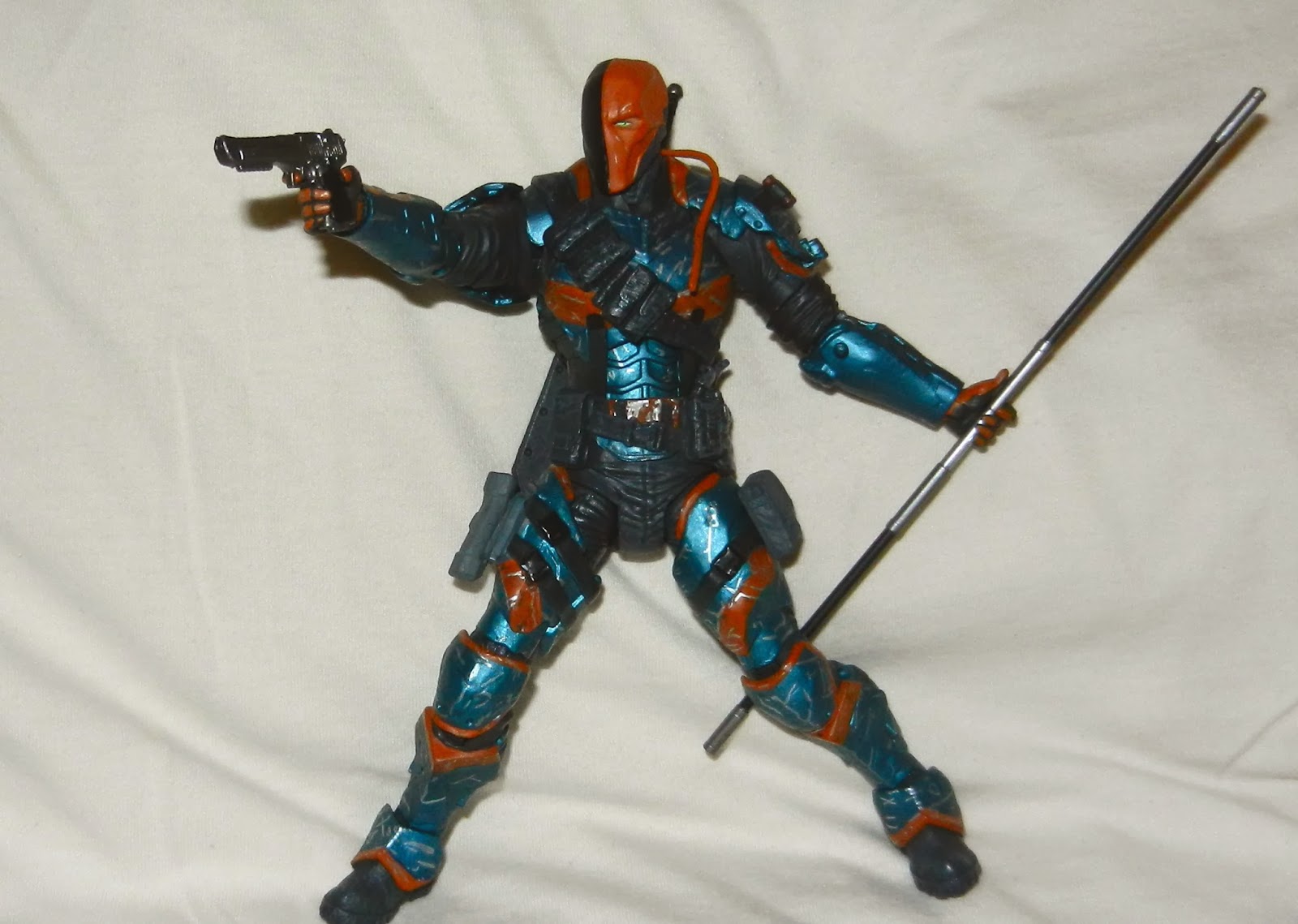 I first saw Manu Bennet in 30 Days of Night, covered in long hair and a beard. Then he was Crixus the primus gladiator in Spartacus: Blood and Sand, where he was really great. Then he shows up as Slade Wilson in Arrow, and I couldn't be happier. Not only is he now an Australian, but the writers make it seem as if Aussie spies carry swords and have coloured balaclavas. That's a stereotype I hope will catch on, one that will replace kangaroos on the Harbour Bridge.

Like the other figures in this wave, last year was a big year for the character, showing up in not just Arrow, but in the video game Injustice: Gods Among Us and of course Arkham Origins. This year he'll be showing up in the cartoon movie Son of Batman, voiced by Thomas Gibson. Slade has been around
in many forms, and played by many people, from great versions like in Young Justice to really awful ones, like Michael Hogan's version in Smallville.

Created by Marv Wolfman and George Perez back in 1980, Deathstroke was originally called The Terminator (a title he sometimes uses to this day in the comics) and was introduced as an antagonist for the Teen Titans, meaning he came up against Robin before Batman. As a dangerous mercenary who's enhanced through military experimentation, Slade's had a weird run sometimes, with him killing his one heroic son Jericho and have his other two kids be villains. Add to that he was an old man going out of his way to kill a bunch of teens and have a sexual relationship with the 16yrold turncoat heroine Terra (which is about as weird and as gross and you'd expect).

But all that nonsense gets pushed to the wayside these days, 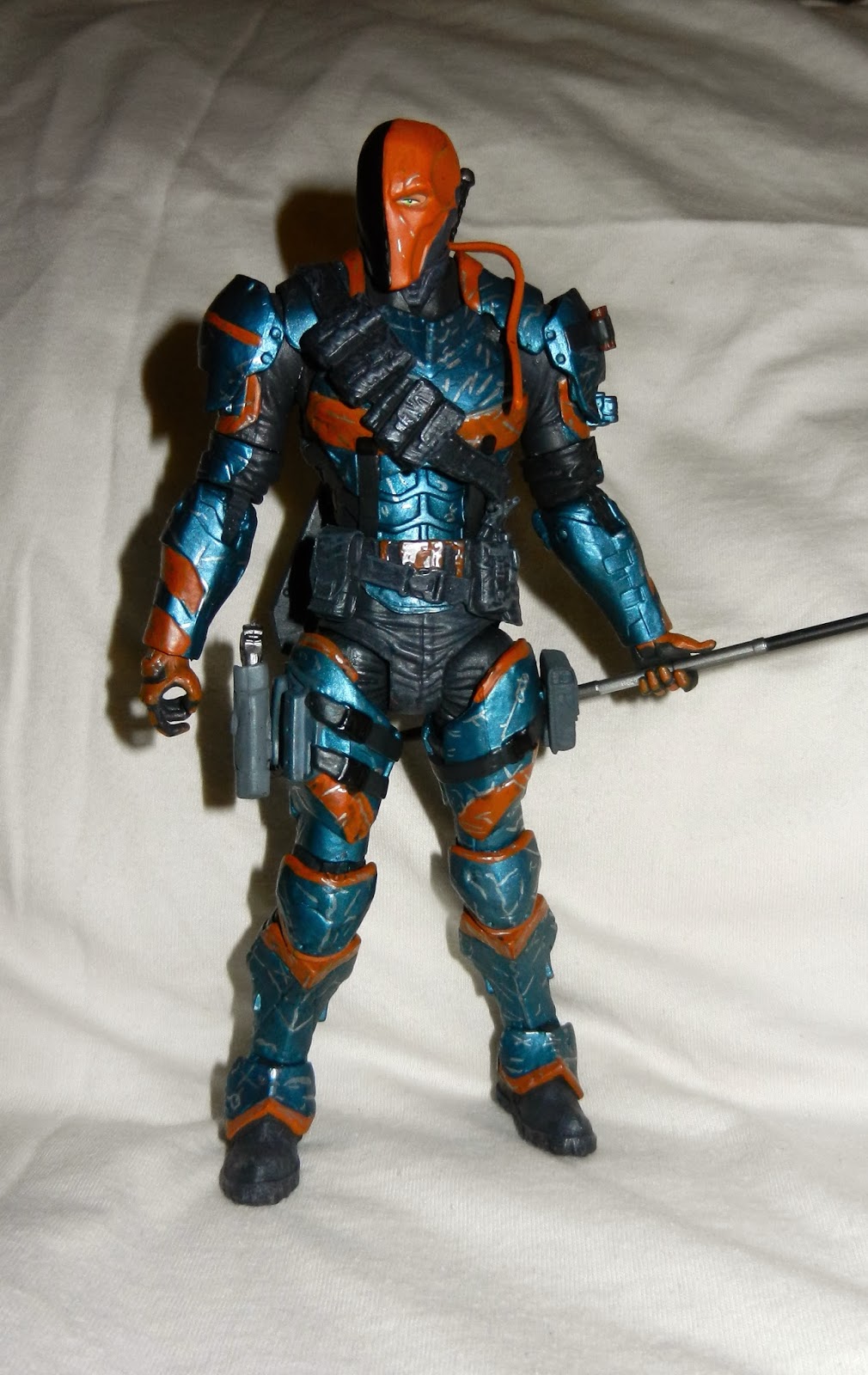 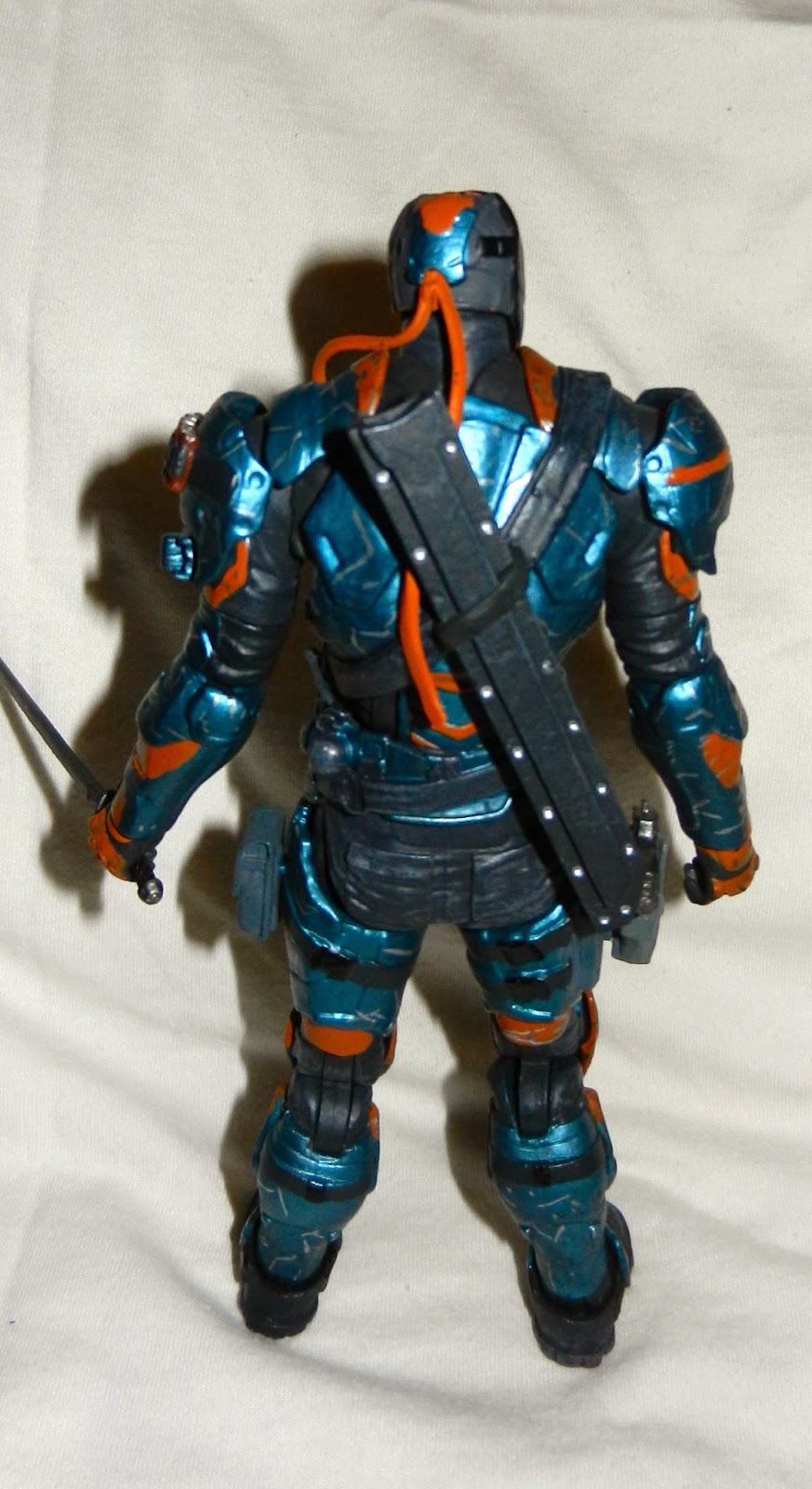 especially with Arkham Origins. He's simply a straight-up merc, hired to take down the Bat, which he very nearly achieved. He's a tough guy to fight, and while his sequence was very early and very brief, we at least got to play as him in the challenge maps, which made up for it in the end, as well as the little post-credits nod to him being in the Suicide Squad. He's voiced by one-time Lex Luthor and Firefly Mark Rolston, who looks just like I feel.

This figure is the Batman of this wave: Packed to the gills with articulation. It makes sense as he's the second playable character, and I'm hoping we get a Origins Robin from the multiplayer, that'd be great. He has a ball-jointed neck and shoulders, swivel hinge elbows and wrists, hinged waist (that's stuck on mine), ball hinge waist, ratcheted swivel hinge crotch joints, thigh cut swivel (hidden by the armour), double hinged knees and hinged ankles with an ankle pivot. Whew, that's a lot all together, and it's pretty amazing work.

The sculpt is fantastic, with even the battle scars scratched across it's surface. The orange is muted, the blue metallic, the scratches, which are all painted, are silver. Even his tiny little green eye is painted crisply, which is something a big company like Hasbro can mess up sometimes.

Characters like Slade and Firefly get the lion's share of accessories for this wave, which would explain 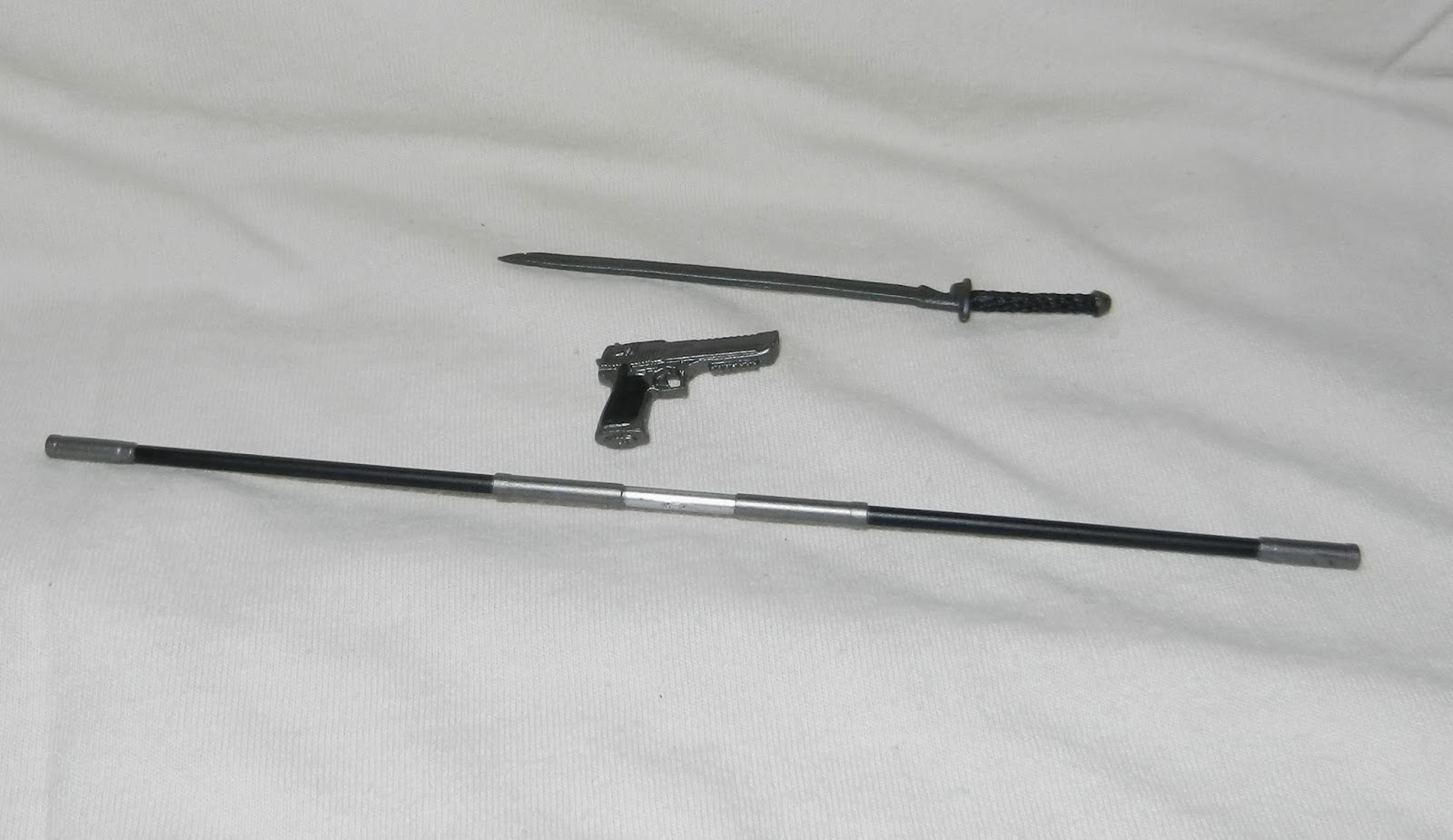 how people like Deadshot and Killer Croc get nothing. Slade gets his sword, his ballistic staff (which allows him to fight like a slower, harder Robin from Arkham City) and what looks to be a Desert Eagle with tactical rails. They're all very well done, get a few paint apps, and all fit well in his hands, which is the best part. All of them are made of a slightly bendy plastic, but still be careful of snapping them.

I was looking forward to getting this Slade as the original one from the DC Batman Unlimited line was such a waste of time. I got him for cheap online with no accessories (That sword is from a Marvel Legend) and he was a bust. The DC Collectable version is better in every way, from scale, paint, artcicualtion and accessories. Hell, his pistol is even better that the one they gave the Unlimited Version (UGH). But the best bit about Slade is that he's the most heavily packed in the wave, so you'll most likely be able to pick him up, and I strongly suggest that you do. 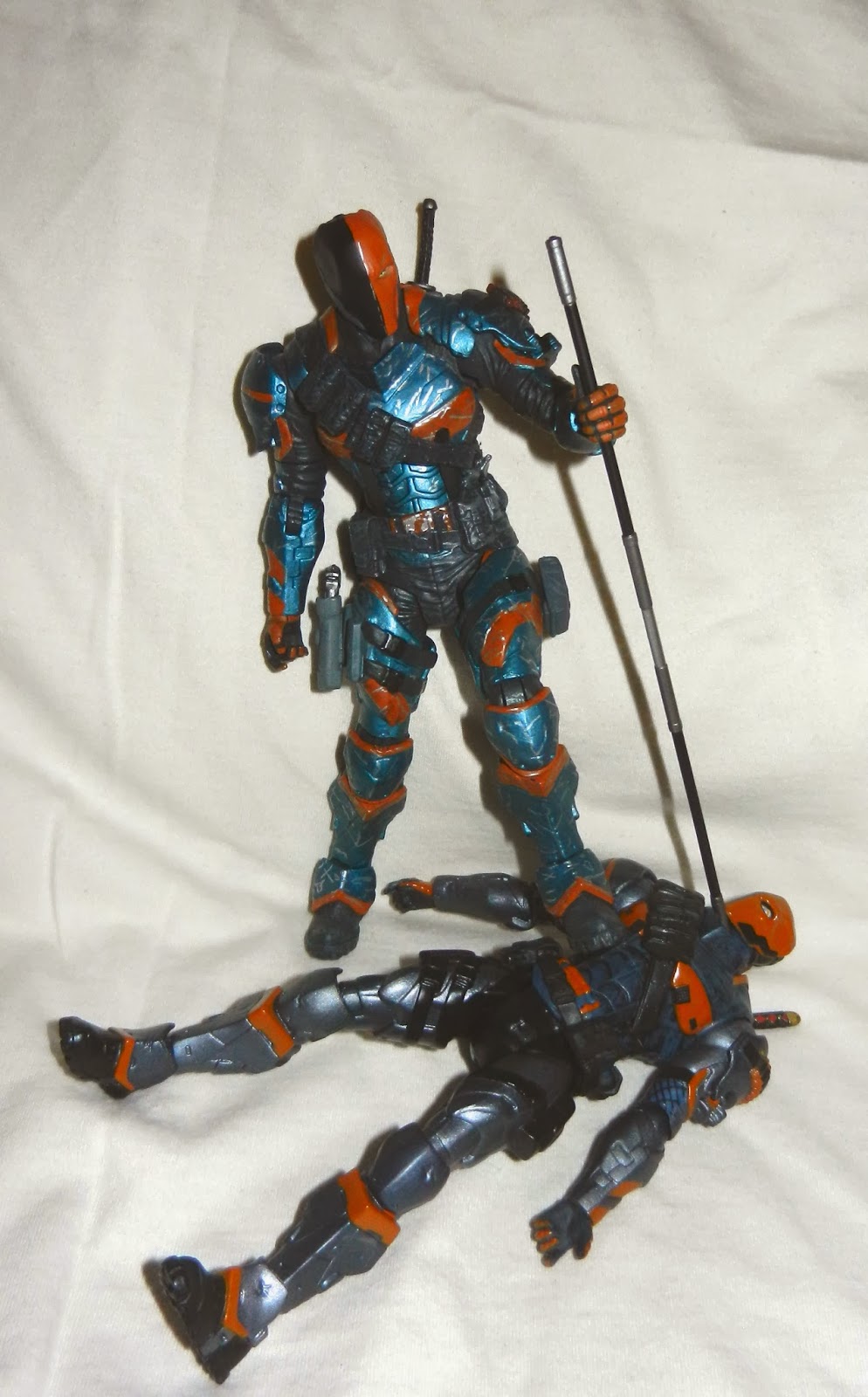