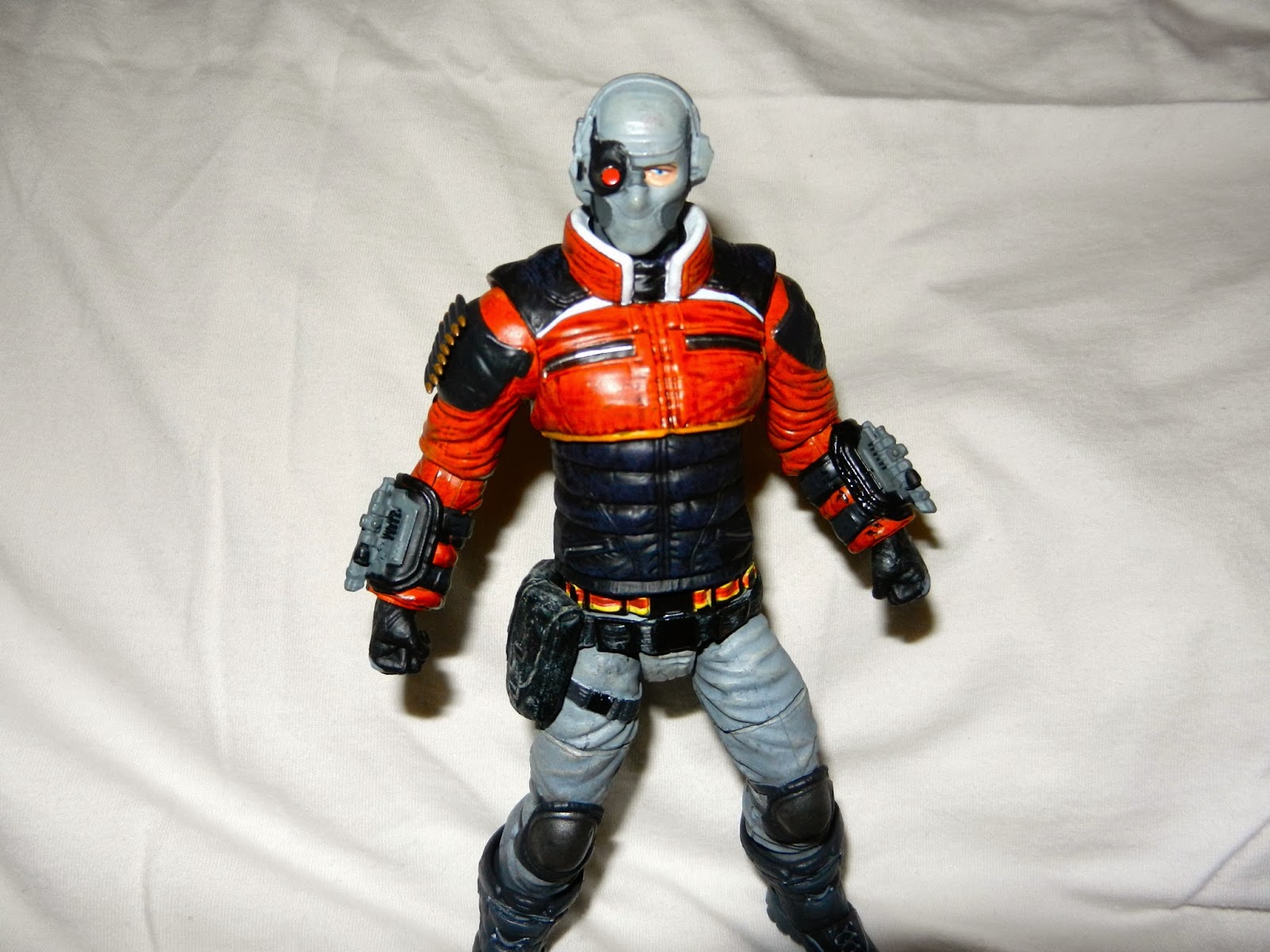 Last year (or is it the year before that? I hate how TV shows have to cut their seasons up) could be considered a good year for Deadshot. Arrow is a show that gets better and better, but early on they had a rocky intro of Floyd Lawton into the show. His first appearance had him looking like a Power Rangers villain, with this dumb huge eye thingy, but his second appearance (written by Geoff Johns no less) was much better, as was his eye thingy, which was more streamlined , and his eye thingy, got better as the show went on, and he's set to make an appearance in the new suicide squad led by shitty new 52-esque sexy Amanda Waller. His Russian episode, Deadshot's third ep, was pretty great, an episode which helped reinforce his mercenary mentality, as opposed to the serial killer style they had previously implied. So, he was on TV and also in Arkham Origins, which is where this figure comes from.

Created by Bob Kane, David Vern Reed Lew Schwartz in 1950, Floyd Lawton is the quintessential gun for hire. Known for his crappy moustache and ice cold demeanour, Deadshot has been portrayed best in cartoon from, first by Michael Rosenbaum in Justice League (who used a great, calm psychopathic Kevin Spacey impersonation) and by Jim Meskimen in the excellent Gotham Knight short (really worth checking out). He originally started as a would-be vigilante superhero, dressed in top-hat and tails, only to be ousted by Bats and Gordon as a would-be king of the underworld. Afterwards, as an assassin, he dressed in a silly red jumpsuit with a crazy eye attachment. Go figure.

Come to the Arkham games, and with an appearance in Asylum as a great little factoid sheet accessed via a Riddler clue, Floyd made a bigger impact in City, where he was an assassin out to get Bruce Wayne and all those who helped created Arkham City itself, who were made prisoners inside its walls. In that game he was a series of interesting detective missions where you can see how crazy his shots really are.

We first caught a glimpse of this new Deadshot in the amazing cinematic trailer for Arkham Origins. There, he uses a sniper rifle to attack Batman and deny Deathstroke the million dollar kill. Unfortunately that whole scene doesn't actually happen in the game, though I think he did use a rifle for a murder. When you face him in his boss match, he unfortunately has goons working for him, but they serve to make the mission way harder and help illustrated the lazer sight gimmick his famous wrist guns have as they bounce around the room. Taking him out required a lot of patience, and was harder than the City version which was pretty straight forward. 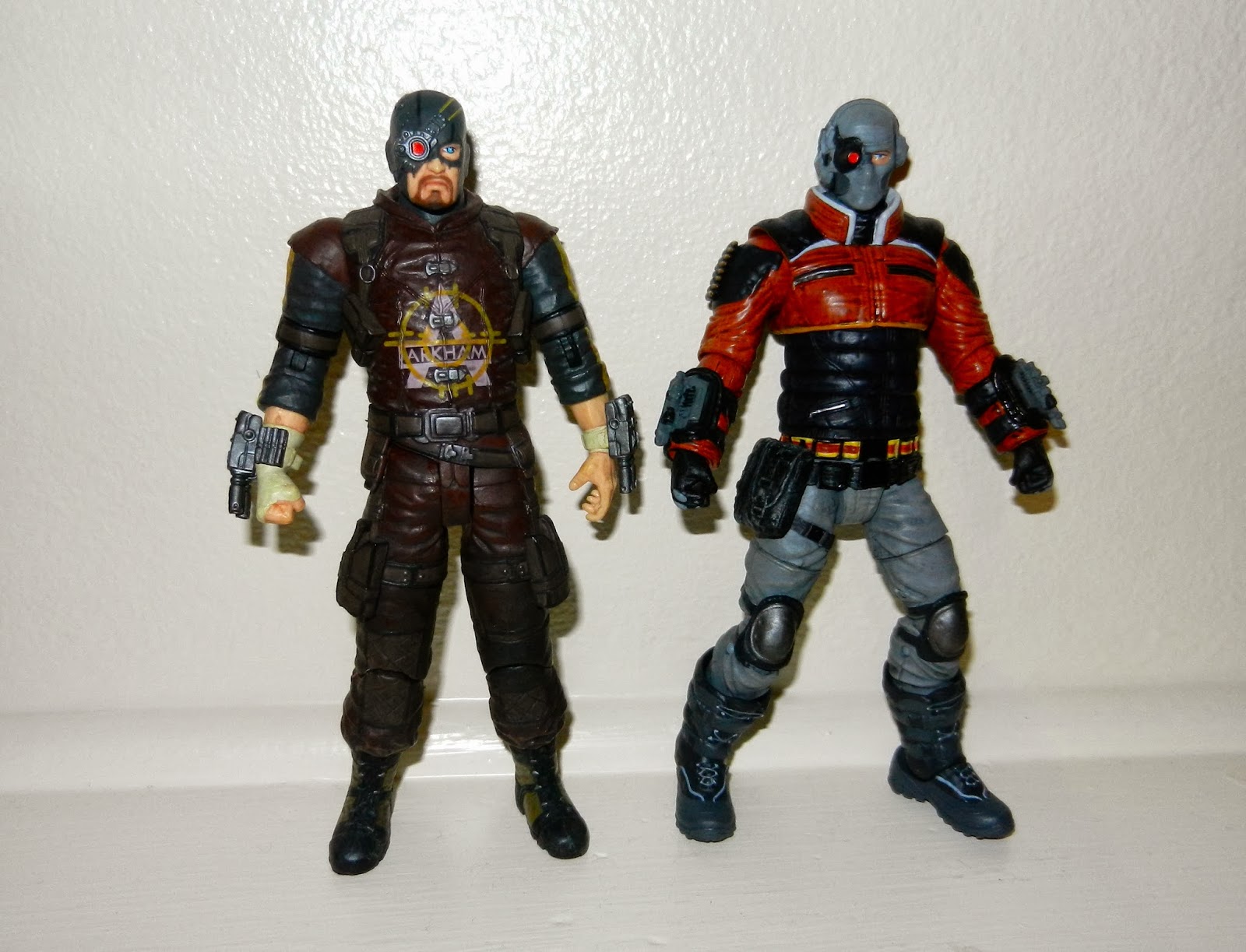 The silhouette is much different from the classic costume (thank god) and the Arkham City version, as they the colours are very different. At least he doesn't have an open mask (or that beautiful eye...). This version is very much grounded in reality, as the clothing isn't that outlandish. It's cold weather gear, his classic mask recreated as a ski mask. He has a headset, his great, streamlined laser eye, and his wrist guns. It's a great look, nailing all elements of the character that make him unique but changing the rest. It implies that he's smart as he changes everything but the tools but adapts to the environment; in City, he modified a prisoner's outfit, in Origins he's dressed in order to brave Gotham's X-mas snowstorm. 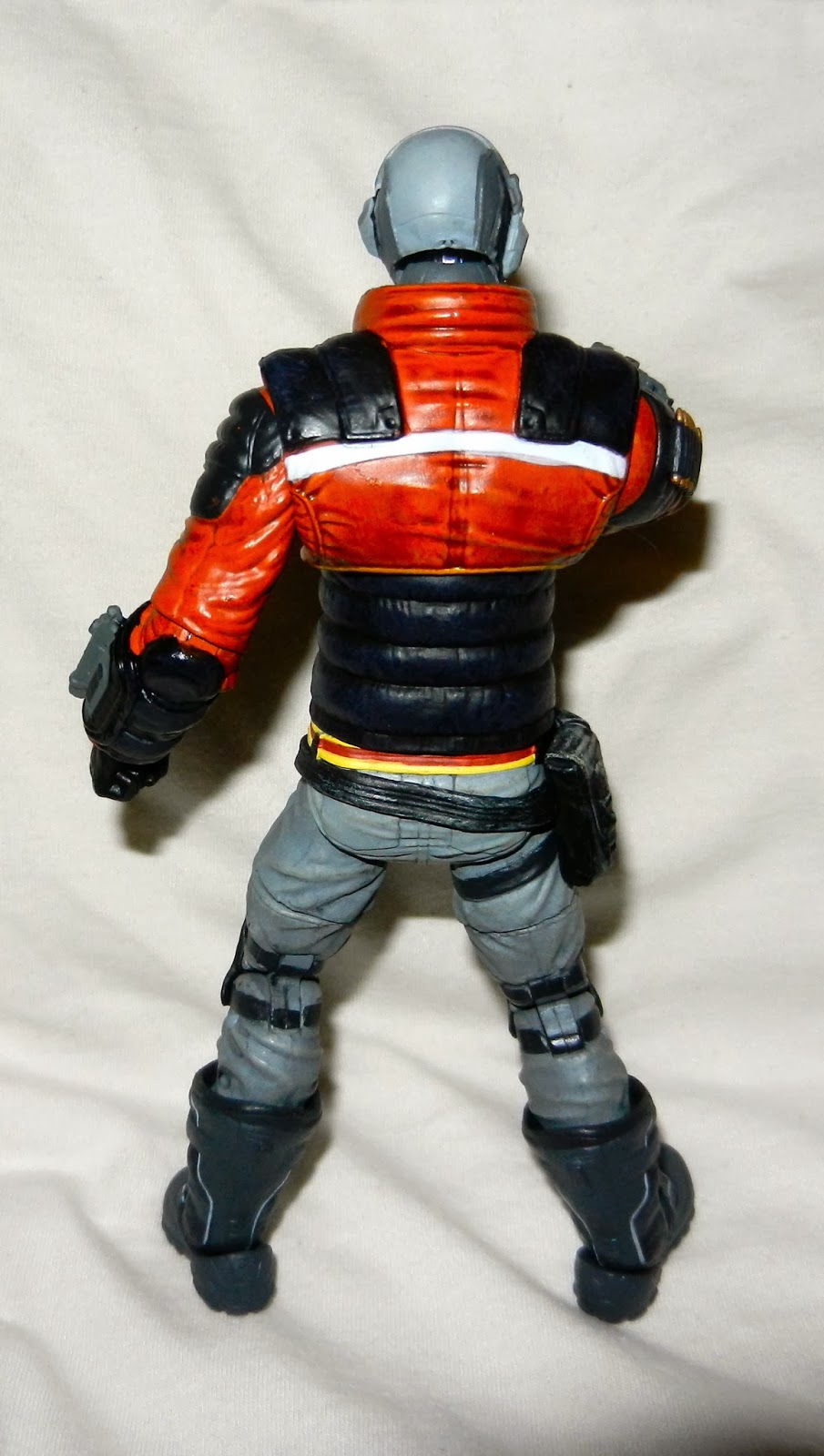 The articulation is plentiful, much, much better than the City version, though the issue here is the range of motion, not the number of joints. He's got a ball-jointed head, torso and shoulders, swivel-hinge elbows, writs and waist joints. He has a thigh cut, double jointed knees and a boot cut swivel. For his feet he has a swivel hinge ankle with an ankle pivot, which surprised me. The only problem with it all is the lack of range of motion with these joints, they're good enough but not stunning.

The paint is impeccable. I've used that word a lot but the paint across all figures have been great. The paint is sharp and vibrant when it needs to be, with little to no bleed or smudge, and the washes they've used make the sculpted elements pop and add depth. It's very pretty. The sculpt, likewise, is solid as hell. My one gripe is that the guns are very soft in their sculpt, but that can't be helped as they're at a very small scale and the paint covers and softens a lot of that detail. 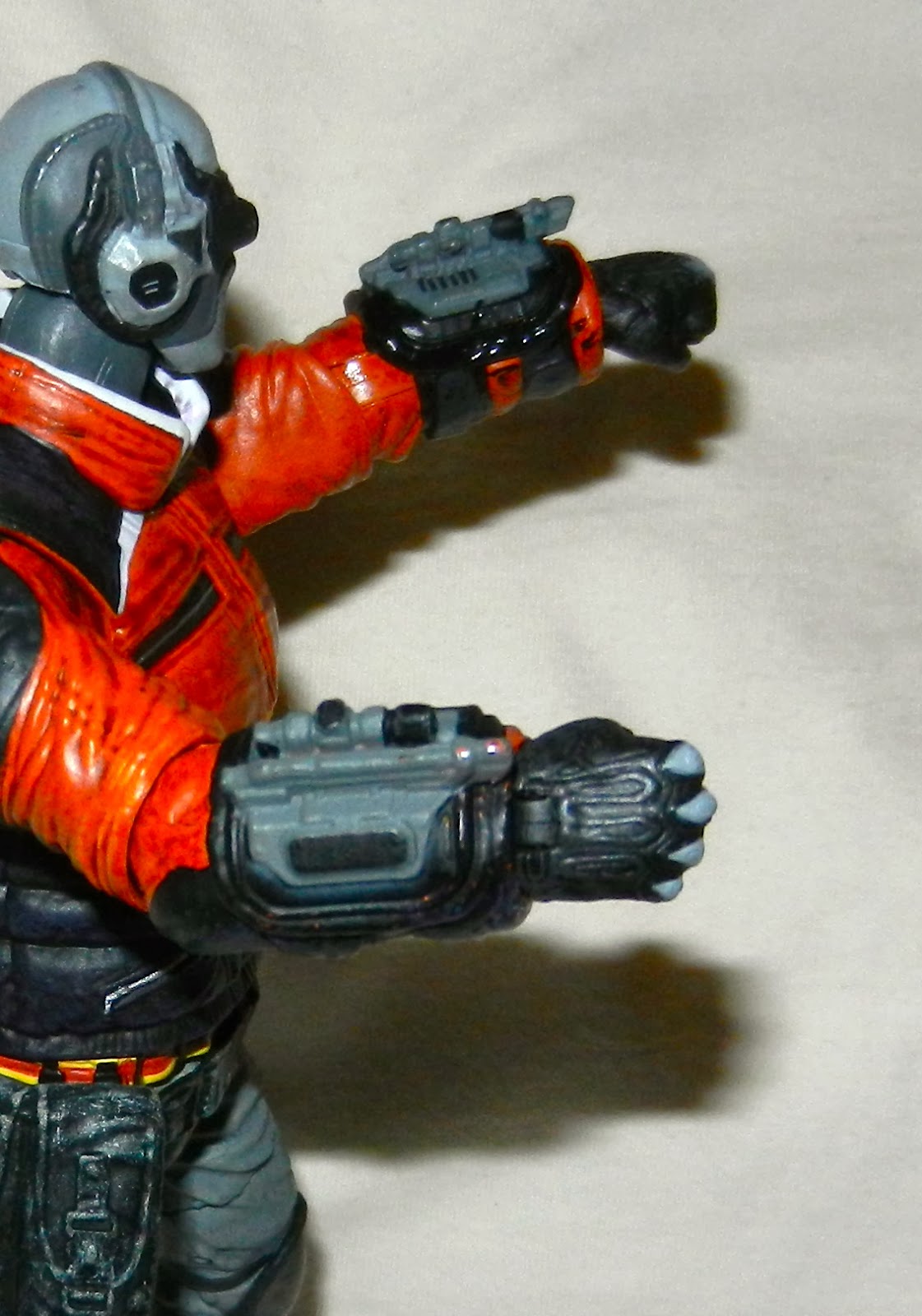 He unfortunately has no accessories. I'd like his sniper rifle, or the one they have in the game, or the one from the cinematic trailer, but seeing as that scene never really happened I guess we shouldn't get it. What you see is what you have to fight in the game anyway, for what it's worth.

So, a solid figure of a design I love. Floyd's pretty hard to come by, by my estimates he's about one per case, or something likewise really small.  Of the three stores I visited, I only saw him once (that's the one I bought) and even my favourite place to buy figures didn't have any left, and they had about 4 of everyone else. So if you liked him in the game, or like him in general, this is, I think, the least stupid of his costumes to be made into a figure so if you see him for a good price pick him up. 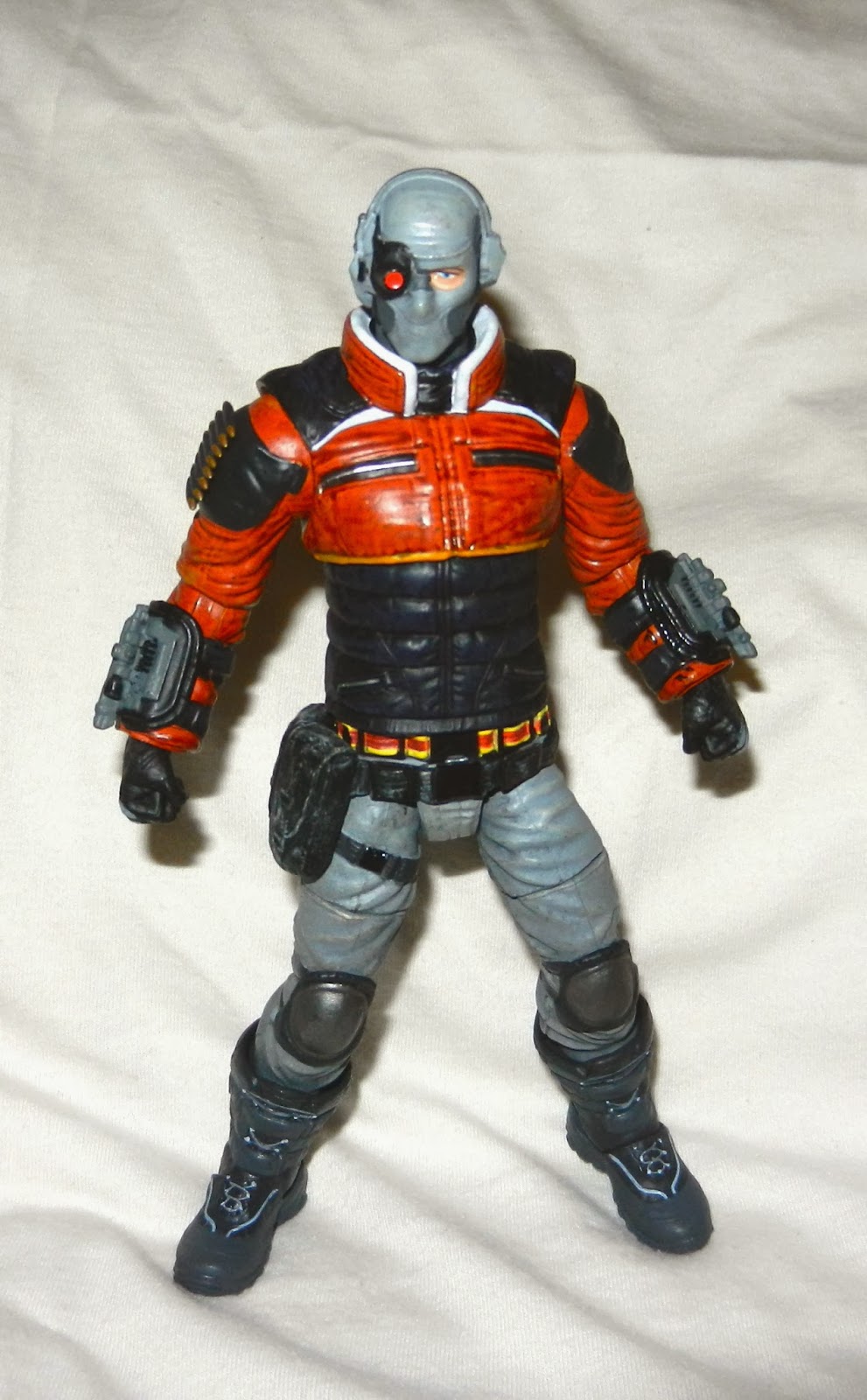