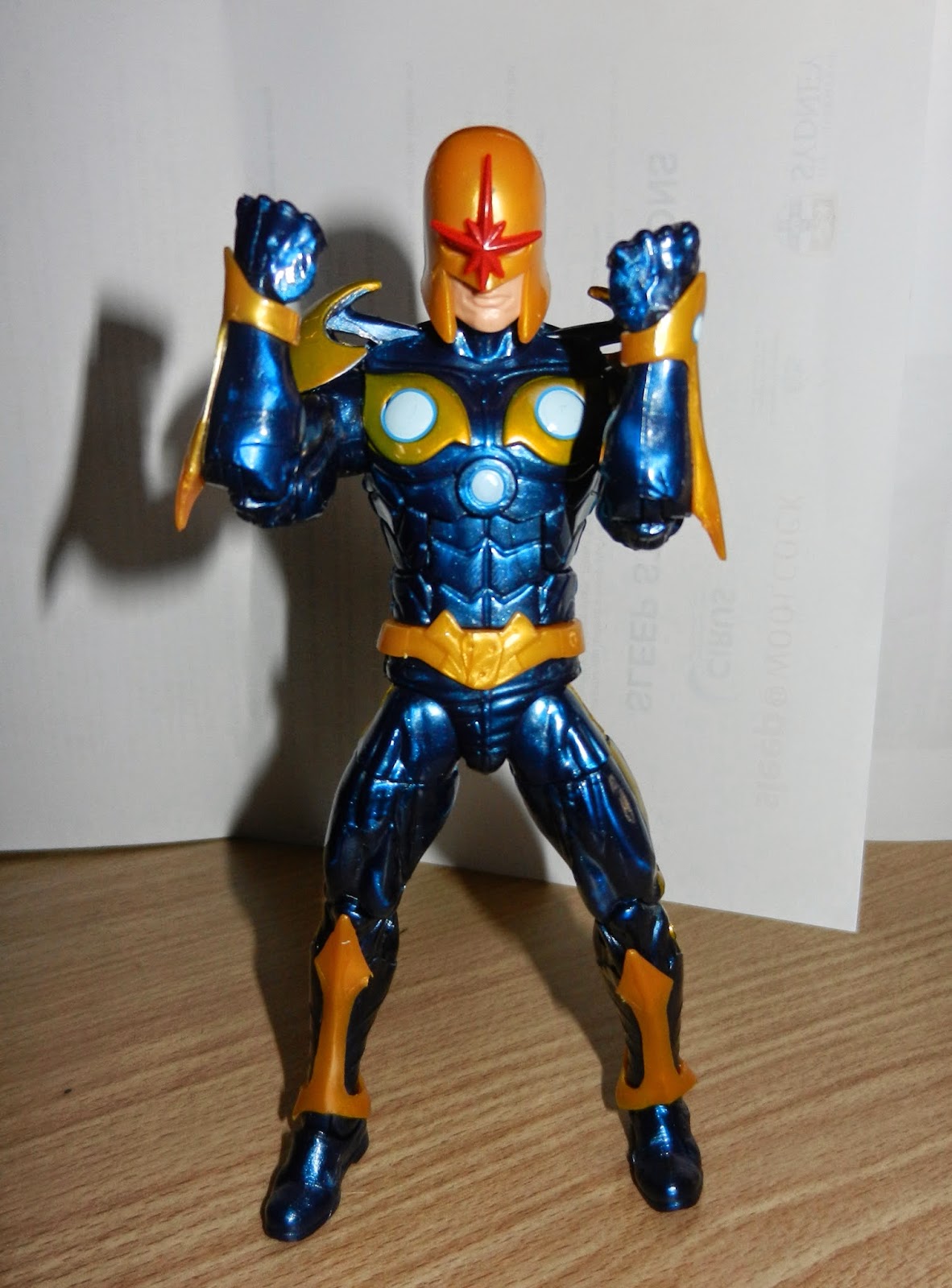 Nova is one of those action figures that customisers out there have repeatedly put their sculpting skills to the test in order to sculpt their own Annihilation Nova action figure, only to have one of the big companies churn one out. I myself have been tempted to give this one a go, as even though I knew so little about Nova before I became interested because of Ari Granov’s painting of him in this particular suit. So here’s what I know about Nova.

Richard Rider was an average kid who ended up being a member of a multi-species interstellar police force called the Nova Corps. Very much like a Marvel version of a Green Lantern, a Nova member became a living rocket, and had collision abilities not that dissimilar to Cannonball from the X-men but could also channel that energy offensively. The Nova Corp home-world was Xandar and the Corps are regulated by the Xandarian Worldmind, a living super computer. The Nova Force granted Nova with flight, super strength, damage resistance, energy blasts, the ability to open doorways called Star Gates and use an attack called a Gravimetric pulse. These abilities were granted to him by the Nova Force, the Xandarian source of all their powers. 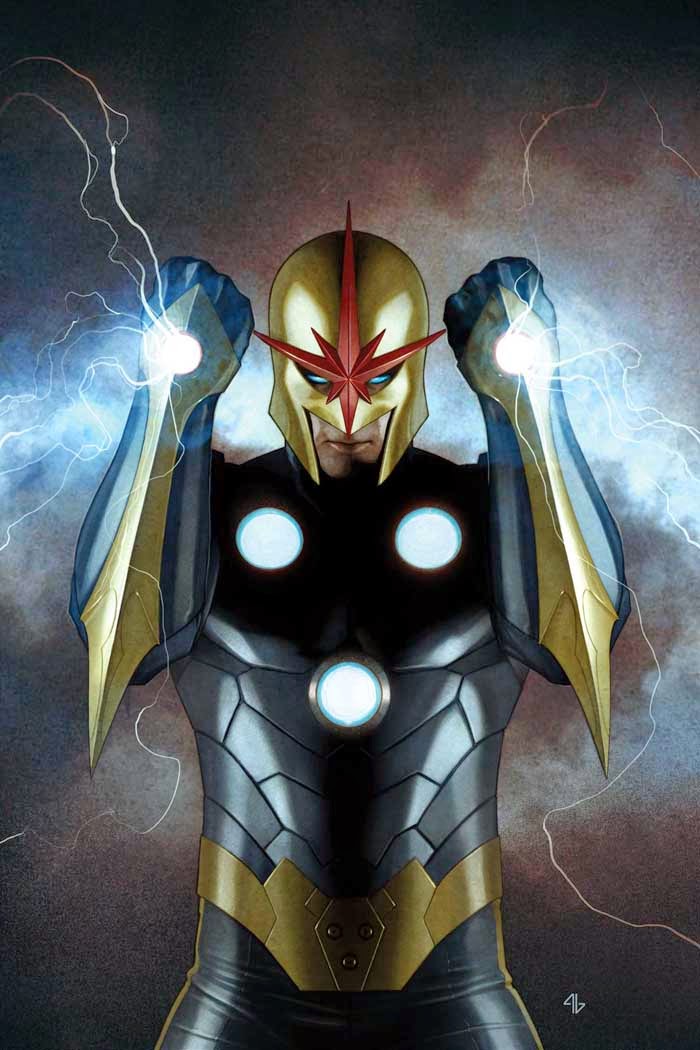 And much like Hal Jordan when he became a ‘hard travelling hero’, Richie found himself living like a normal person, having to work crappy jobs (for example, in a fast food joint) to make ends meet despite having super powers. Being a product of the 90s I remember seeing him in New Warriors with a mullet sticking out from under his helmet, so he seemed to take up the ‘Seattle grunge scene' look. For a cosmic character he seemed quite grounded.

But that didn’t last long, soon Richie took to the stars and had his shining moment come with Marvel Annihilation: When Fantastic Four villain Annihilus (and his impossible large fleet of ships, the Annihilation Wave) escaped the Negative Zone and waged war on our universe, one of the first victims was Xandar, and the whole Nova Corp. The last surviving member, Nova had the Worldmind uploaded into his mind and body, greatly increasing his knowledge and strength, and granting him access to all of the Nova Force, the source of the Corp’s powers. He was now an alpha level opponent, and the experience also granted him the coolest costume ever.

The suit also absorbs some of the Nova Force in order to keep him sane. I think that’s what those big discs are for. All the details are represented here amazingly well. He's a 90% original sculpt, with things like the feet, thighs and upper arms the only re-use i can see. Everything else is brand new. 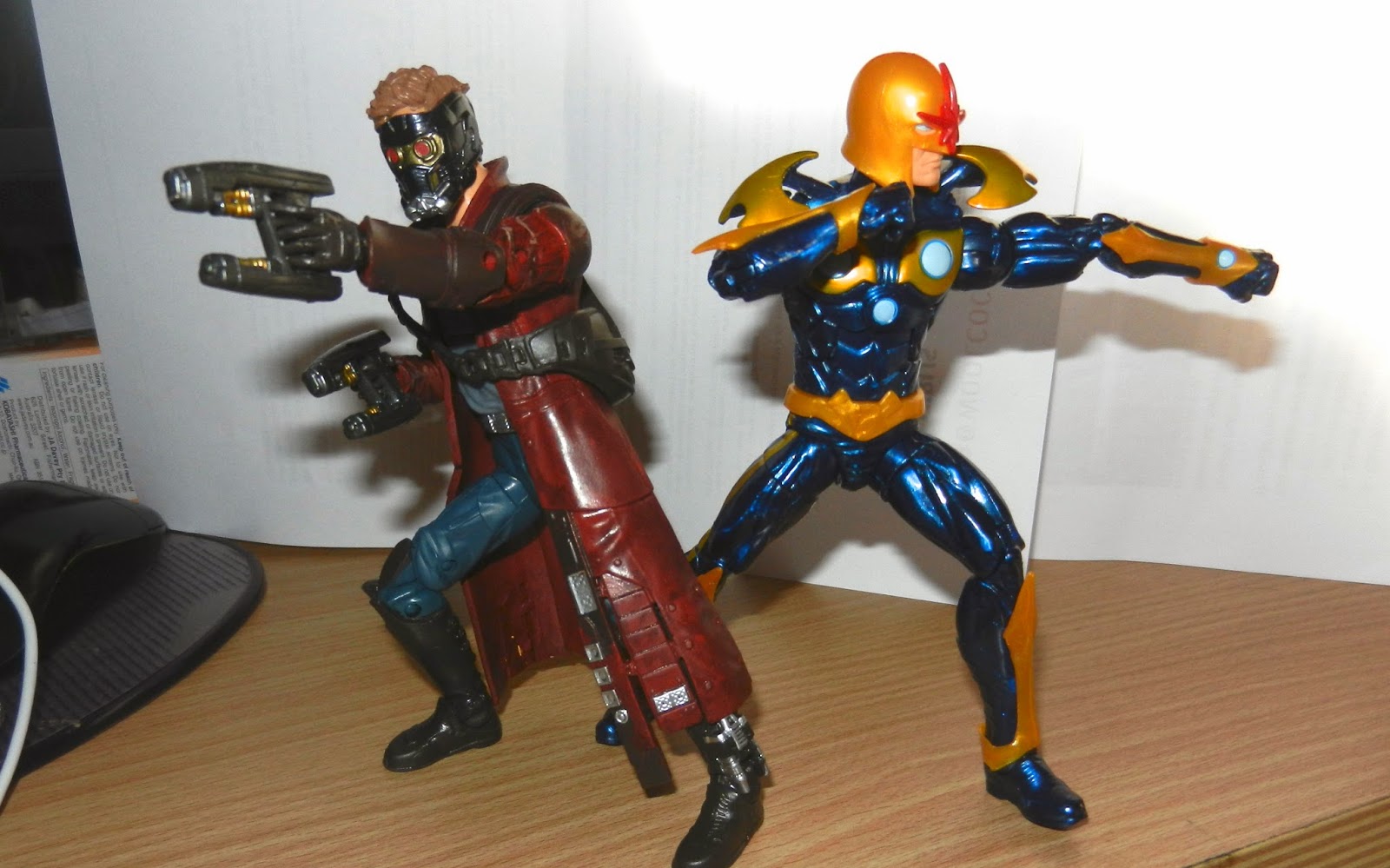 His helmet and some raised gold elements are cast in metallic gold plastic, and the rest of him is a deep metallic navy, that kind of plastic that has metallic plastic mixed into the navy blue in the casting process. His face is painted flesh and the red star on his helmet stands out and is cast in red plastic. The head is separate from the helmet, and his face is largely sculpted underneath. You can really tell which bits are cast in gold and which ones were painted. The blue orbs on his chest and forearms are very light blue with a painted darker edge around the outside. 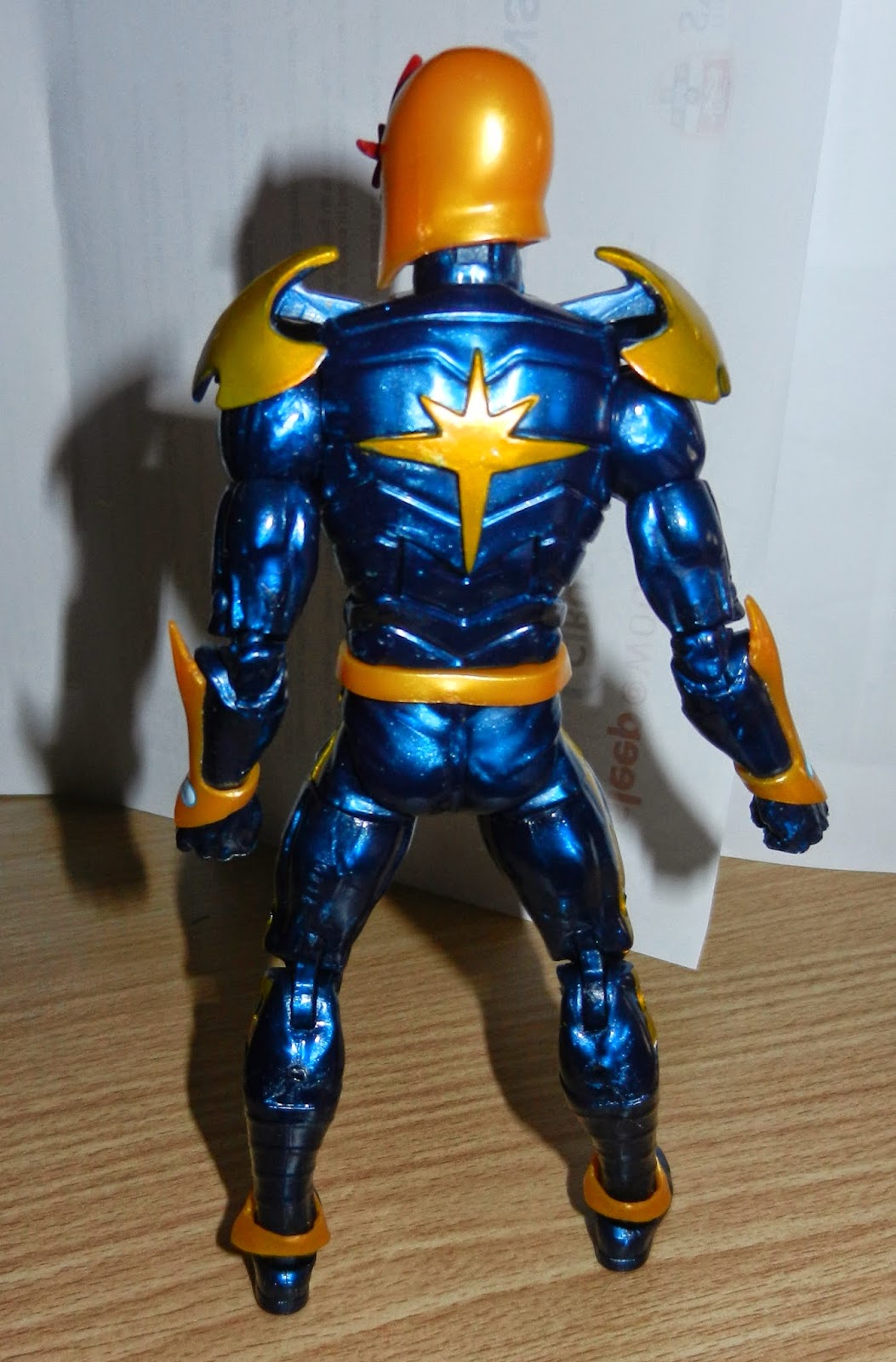 His articulation is mostly great. Ball hinge feet, double jointed knees, swivel thighs, ball jointed hips, swivel waist, ab crunch, swivel balljoint neck/head, double jointed elbows and balljoint shoulders and wrists. The shoulder-pads are made of a softer plastic that a lot of his armour is made of, (And are on little swivels) but not soft enough for him to get his arms up to achieve that classic flight pose, although his head does allow for a good position.

So yeah, the figure everyone wanted, in the version everyone wanted. The hard part of his design was those shoulder-pads, and unfortunately they didn't turn out perfect here. But his groovy sculpt makes up for his lack of accessories.

For those buying at retail, the only thing i would warn against is that red star on his head, it might be a bit wonky. But otherwise, a great figure. 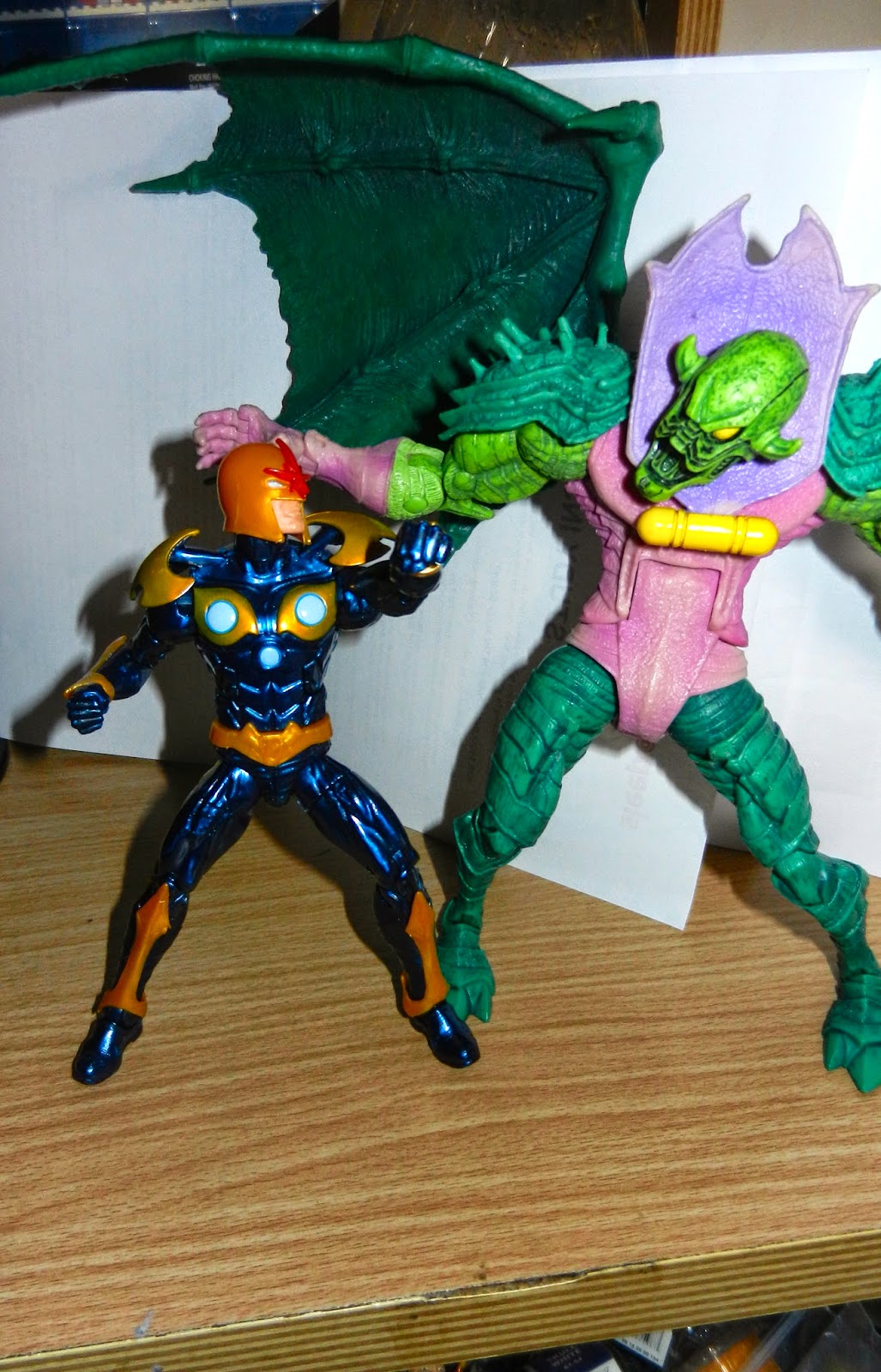 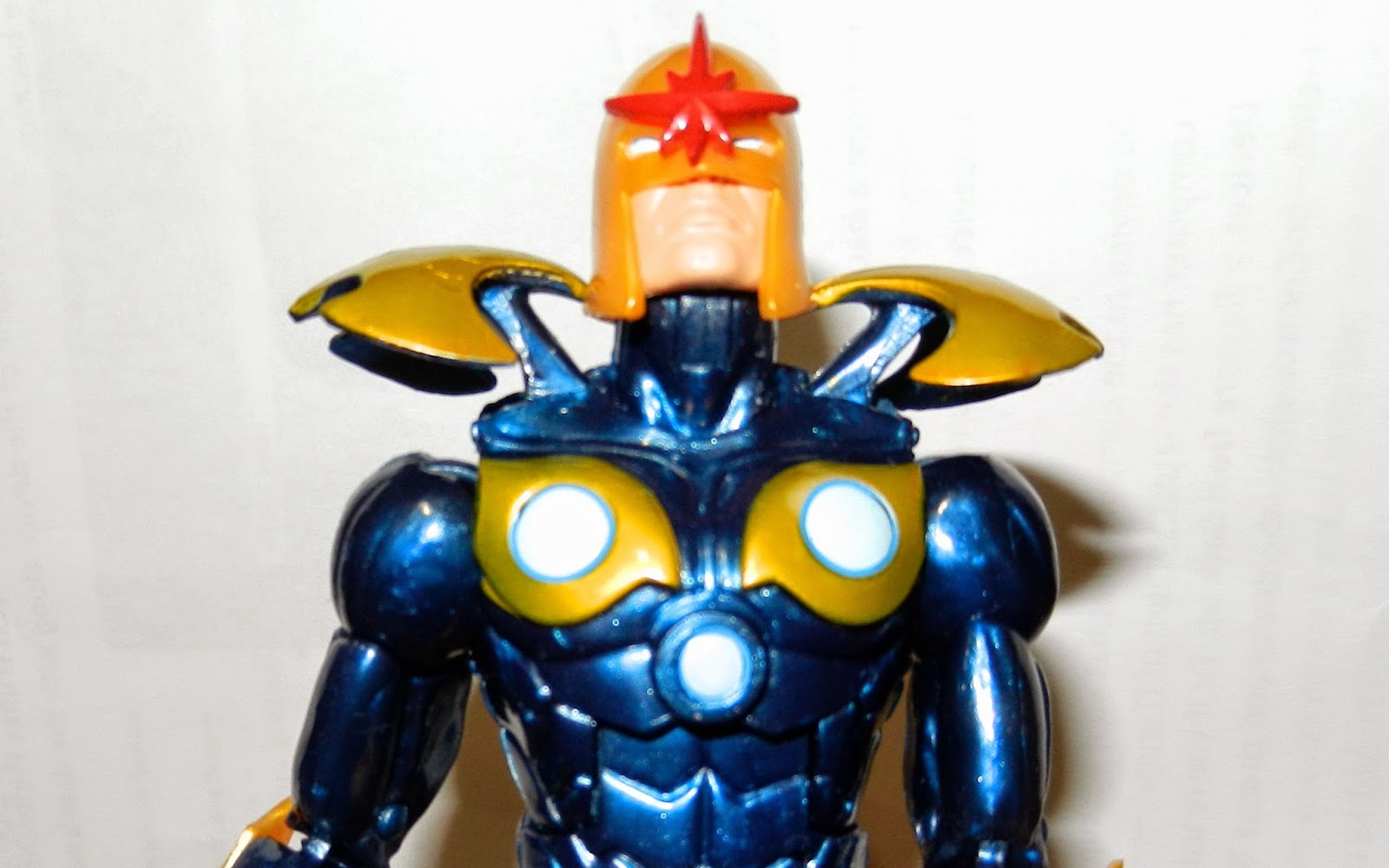 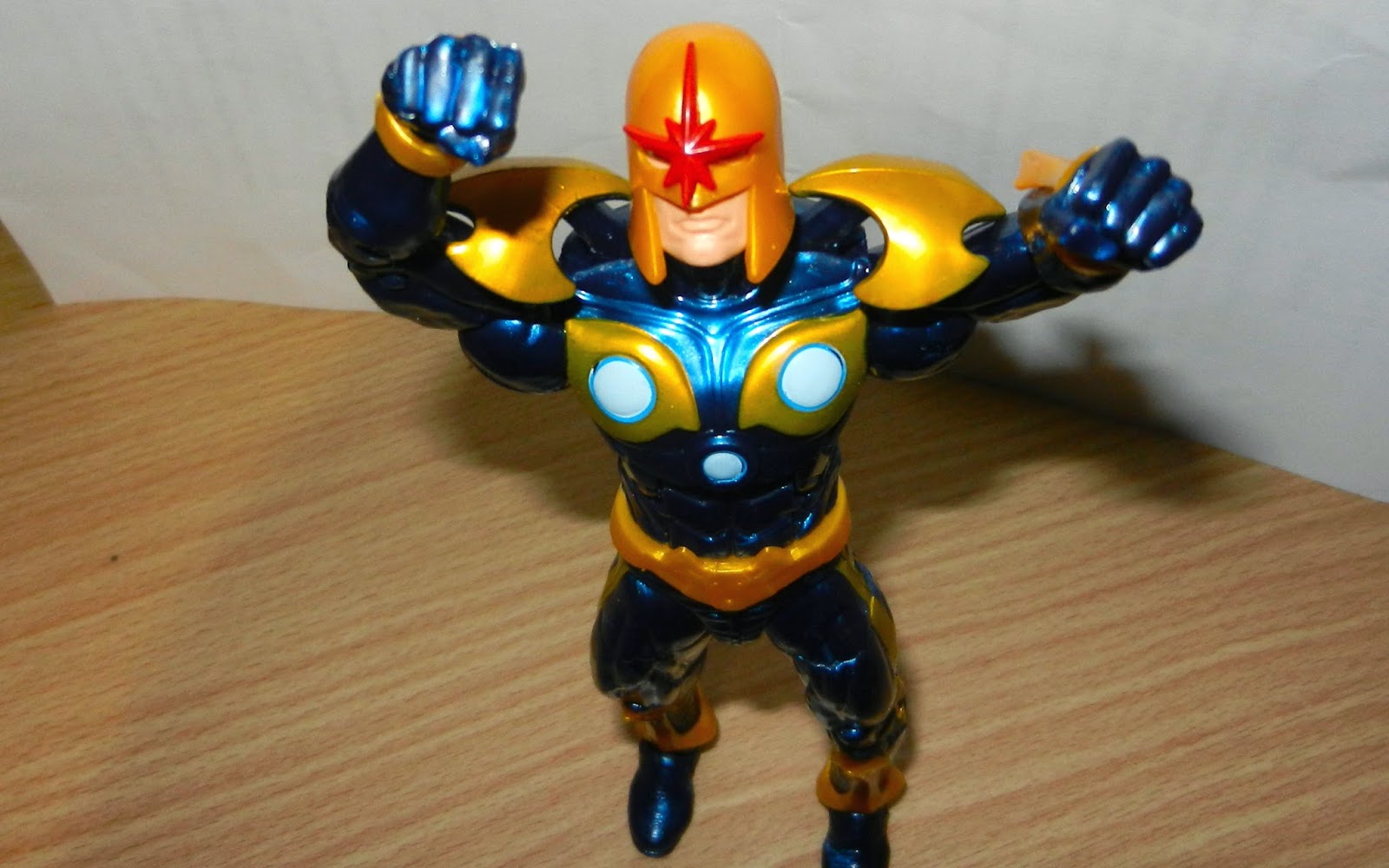 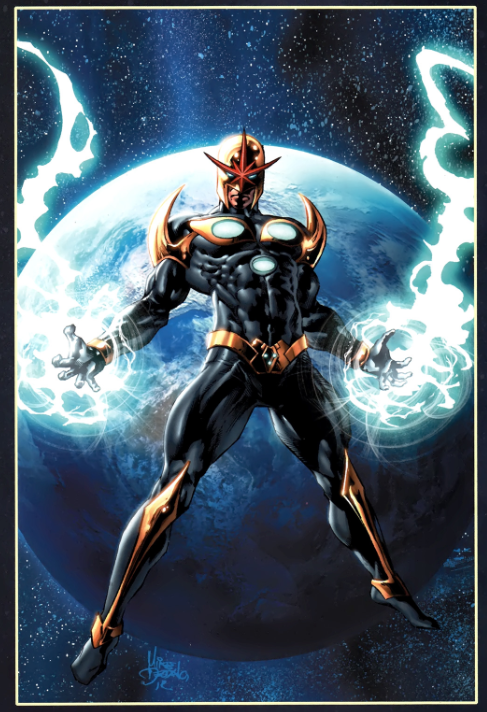