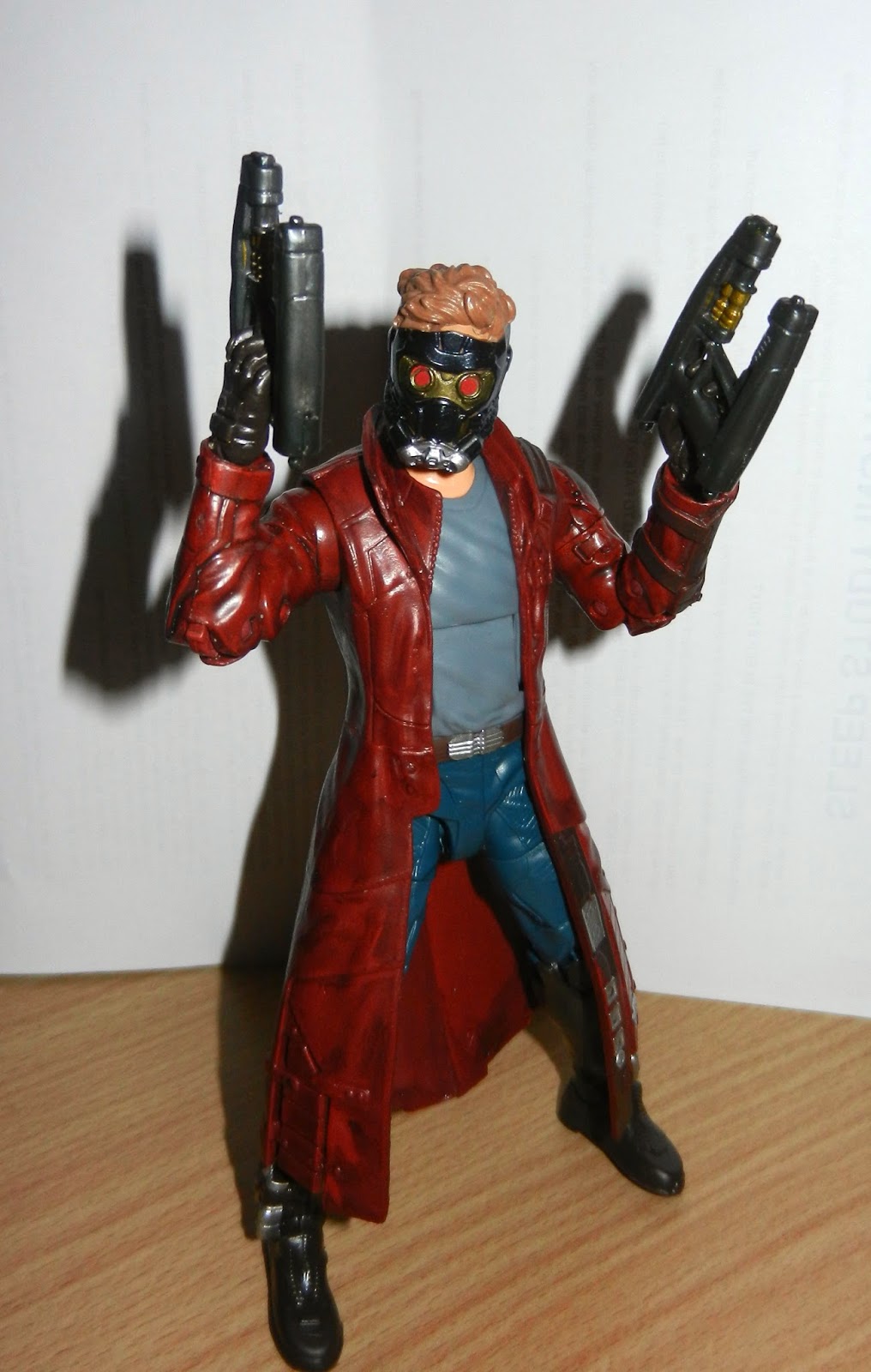 The problem with someone like Star-Lord is that he’s not, in terms of popularity, a Batman-level character, who has a vocal fanbase that would object strongly to any major changes to the character. So what we end up with is a character that’s constantly changing to fit whoever is writing them at any given moment.

We start in 1976, where Steve Engleheart created Star-Lord. As told by Matthew Peterson at Majorspoilers.com (Read the more in-depth story here) Engleheart’s intention was to turn a brash, awful and unlikeable man into a genuine force of good in the universe. But he only got to the a-hole bit before leaving, so our impressions of early Quill are shaped as such.

Born to Meredith Quill, Meredith’s husband saw no resemblance to himself in young Peters face, and tried to murder the infant. A timely heart attack saved Peter, who later learned that his real father was an alien prince called Jason (later ret-conned to J-son). After his mother was murdered by lizard aliens, Peter joined NASA, and was visited by a being called the Master of the Sun who wanted someone to take up the mantle of Star-Lord. Peter beat a hated rival to gain admittance and was given a talking star ship called Ship and his Element Gun, which could harness the earth’s elements (earth, wind, fire, water). 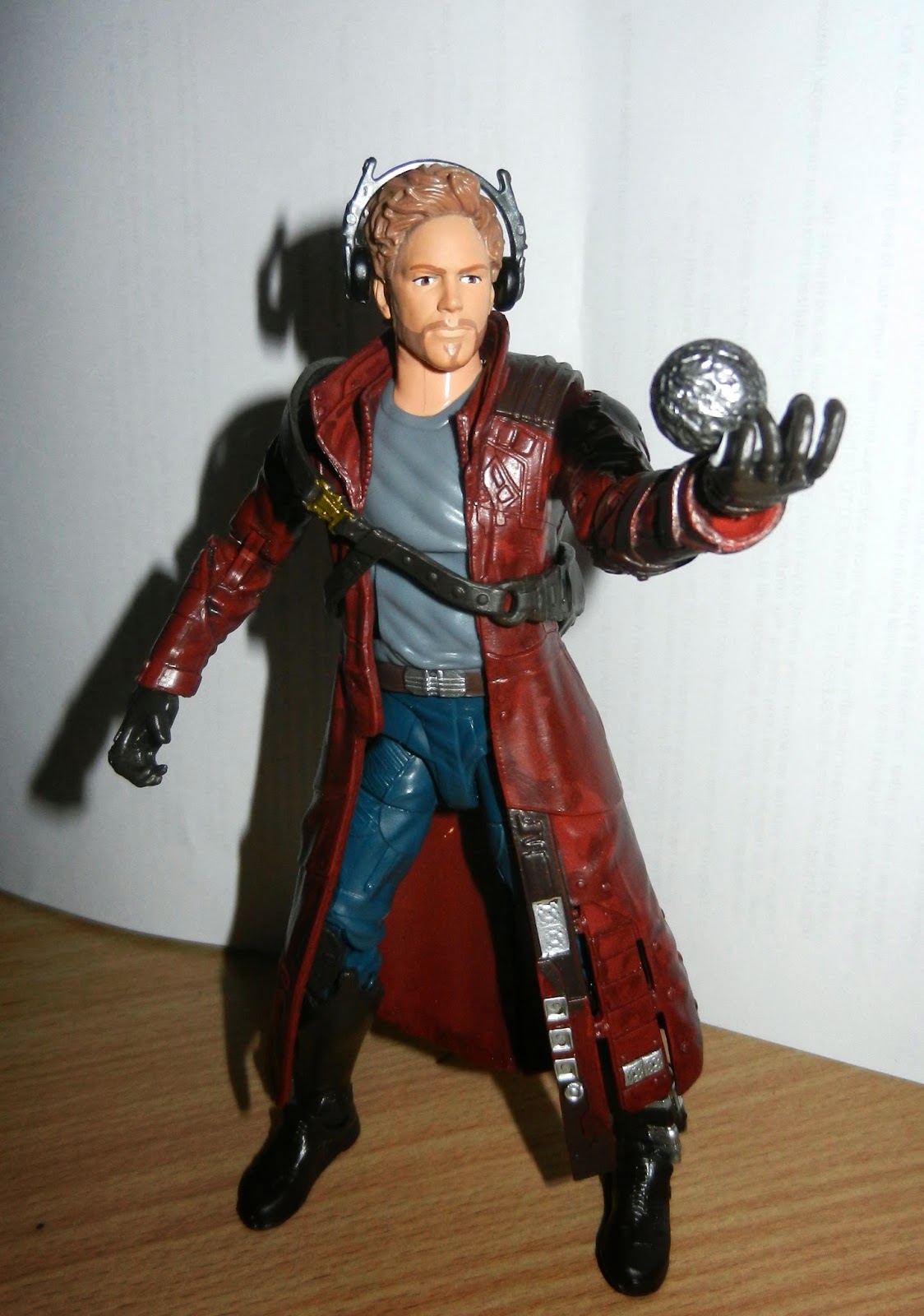 I came across Star-Lord later in his life, during the Annihilation saga. At this point he’d lost everything; he’d faced a rogue herald of Galactus, and sacrificed thousands in order to save billions. He’s lost his gear, his ship and his desire to remain human, covering himself in cybernetic implants. During this time
he was the trusted advisor to Nova as he fought Annihilus, and would often annoy Nova by calling him ‘Richie’. Afterwards he was accidentally responsible for the invasion of the Kree Empire by the Phallanx, and as punishment had his implants removed and placed in charge of a rag-tag espionage team. It was in this team he met Groot, Rocket Racoon and Mantis, with whom he created the Guardians of The Galaxy with. That was the coolest run (written by Dan Abnett and Andy Lanning) which lead to the movie being made.

My favourite period of Star-Lord ended with he and Nova fighting to keep Thanos from re-entering our universe by staying behind and distracting him as a dying universe collapsed around them; Star-Lord mysteriously returned blond and with his old element gun back, without Nova. He now looks like he does in the movie, so that makes this figure basically a comic figure as well.

From what we’ve been told of the new version from the movie, Peter Quill was kidnapped from earth as a child. So he’s an overgrown child who never grew up and who only knows 80s popular culture? He’s pretty much every nerd out there. However, the second trailer also shows him rousing the Guardians in a way that reminded me of my favourite version of Quill, so that’s something. 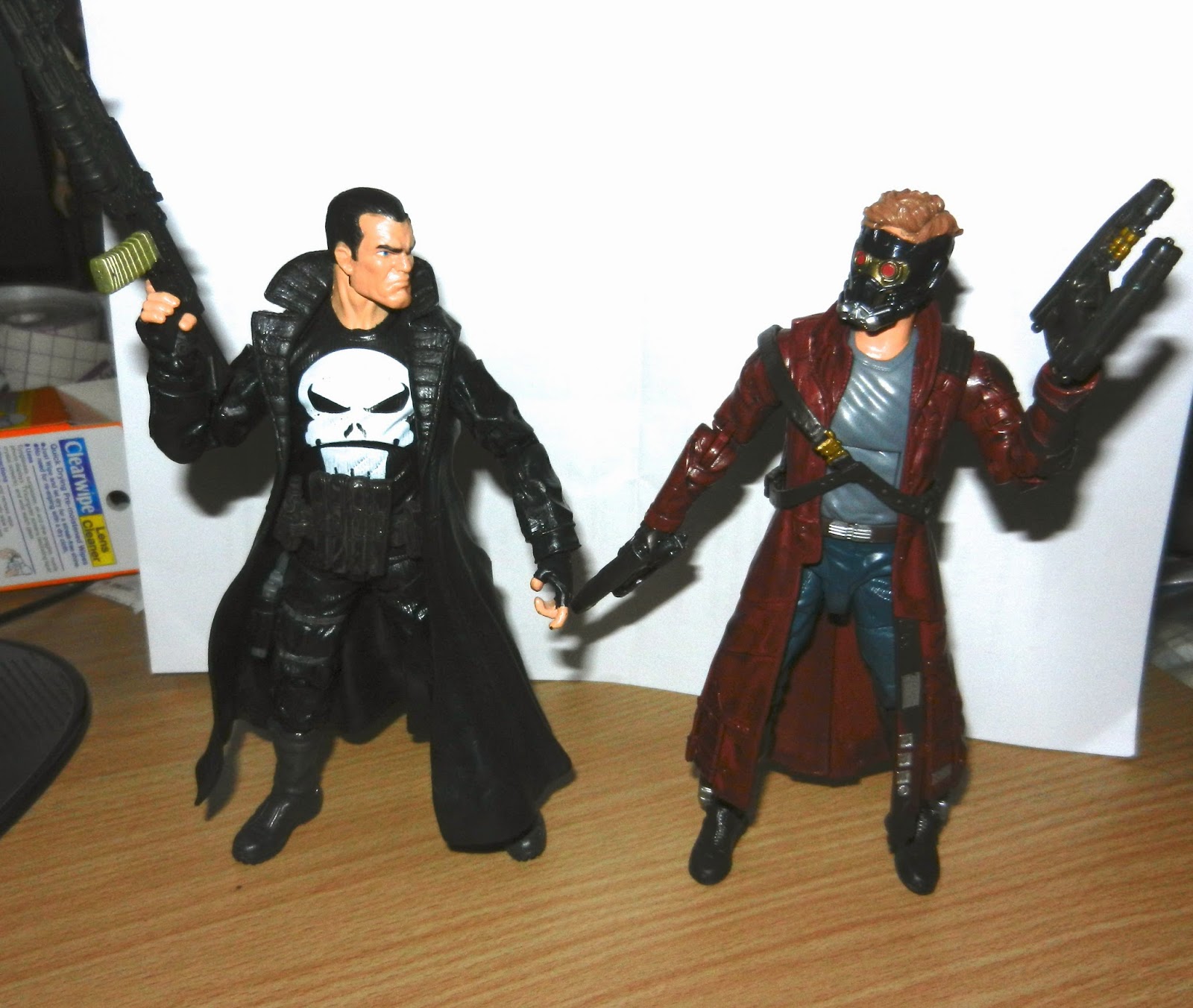 I remember thinking when seeing the first pictures that they were going to just reuse that old Punisher mold. I’m very happy to report that he’s a 100% new sculpt, and from what I can tell from the rest of the line he’s got the lion’s share of accessories too. 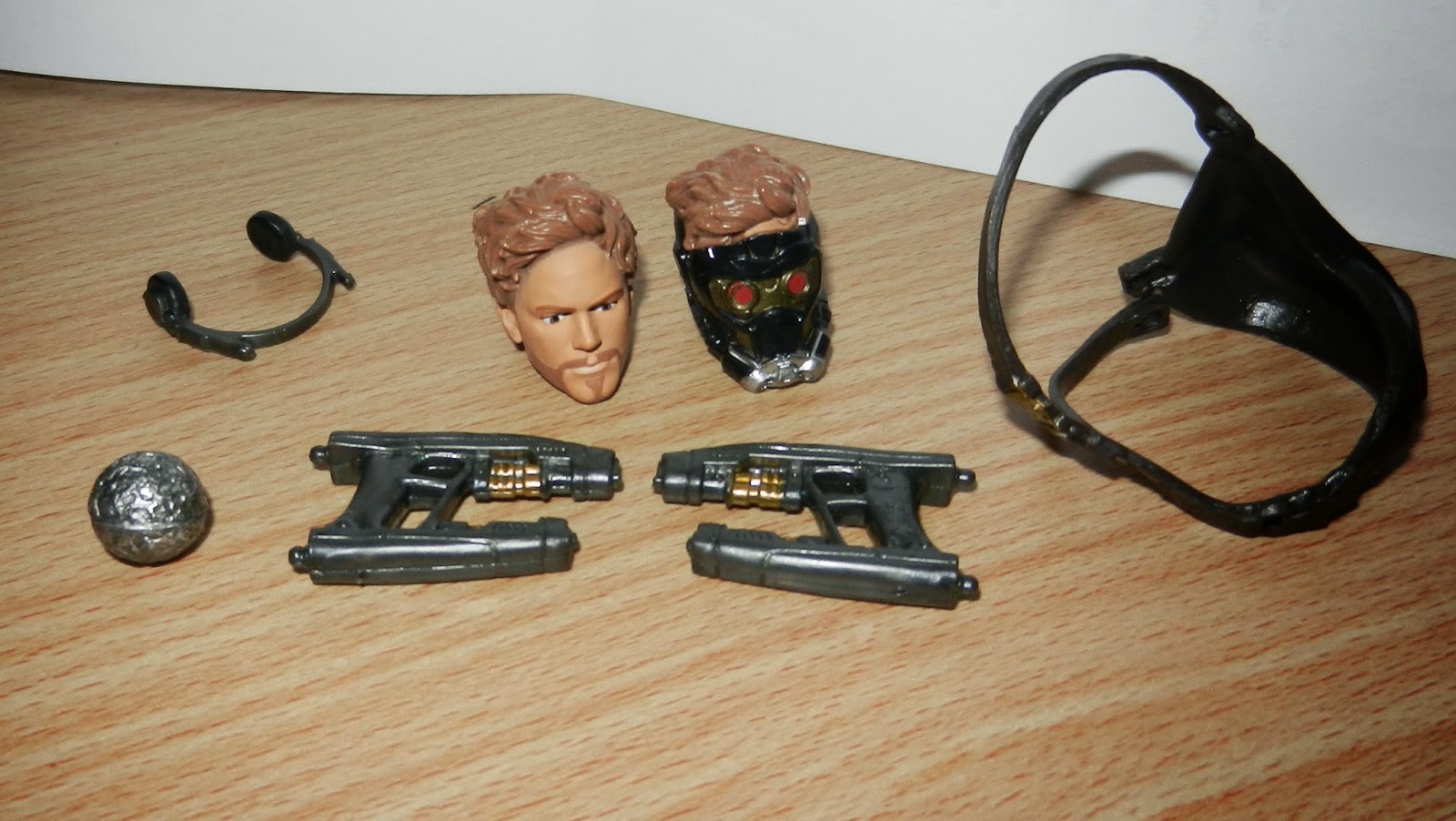 What impressed me about the Marvel Select Wolverine from last year was that they followed the Japanese collector action figure ethos of ‘everything that you want out of the character is in this one box’. He comes with the alternate head, removable satchel, his twin pistols, and that strange orb he was stealing at the beginning of the first trailer (not the orb he shakes up and lets free for light). He also has his headphones for listening to his classical music. He can’t hold the orb all that well and the guns don’t stay in as strong as I’d like them, as the fingers are soft. 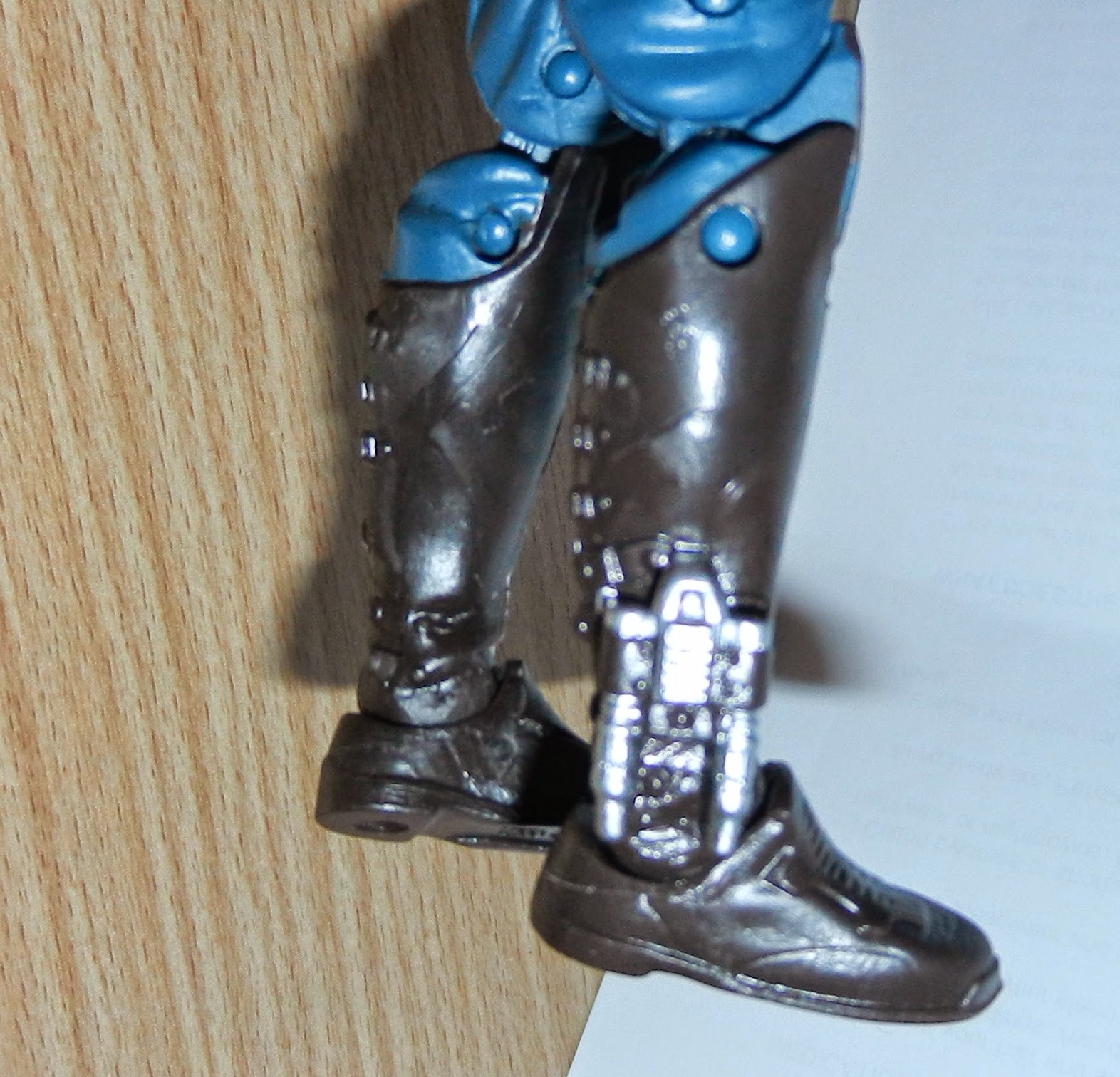 The sculpt is great, and like I said all brand new. He even has the rocket boosters we’ve seen in the trailers and TV spots; they even went so far as to sculpt the buttons to fire them. The paint is strong. He has silver highlights on the rocket boosters, some square elements on his coat and his belt buckle. He’s wearing a bluish grey t-shirt, and his coat, covered in a wash to make it seem more dirty and leathery, has brown leather parts on his shoulders and a brace on his left arm. The paint on the unmasked head is ok; I think it’s the paint on the eyes that make him look less like Chris Pratt. The mask head is better, the mask looks great but there’s a bit of slop with the red eyes. 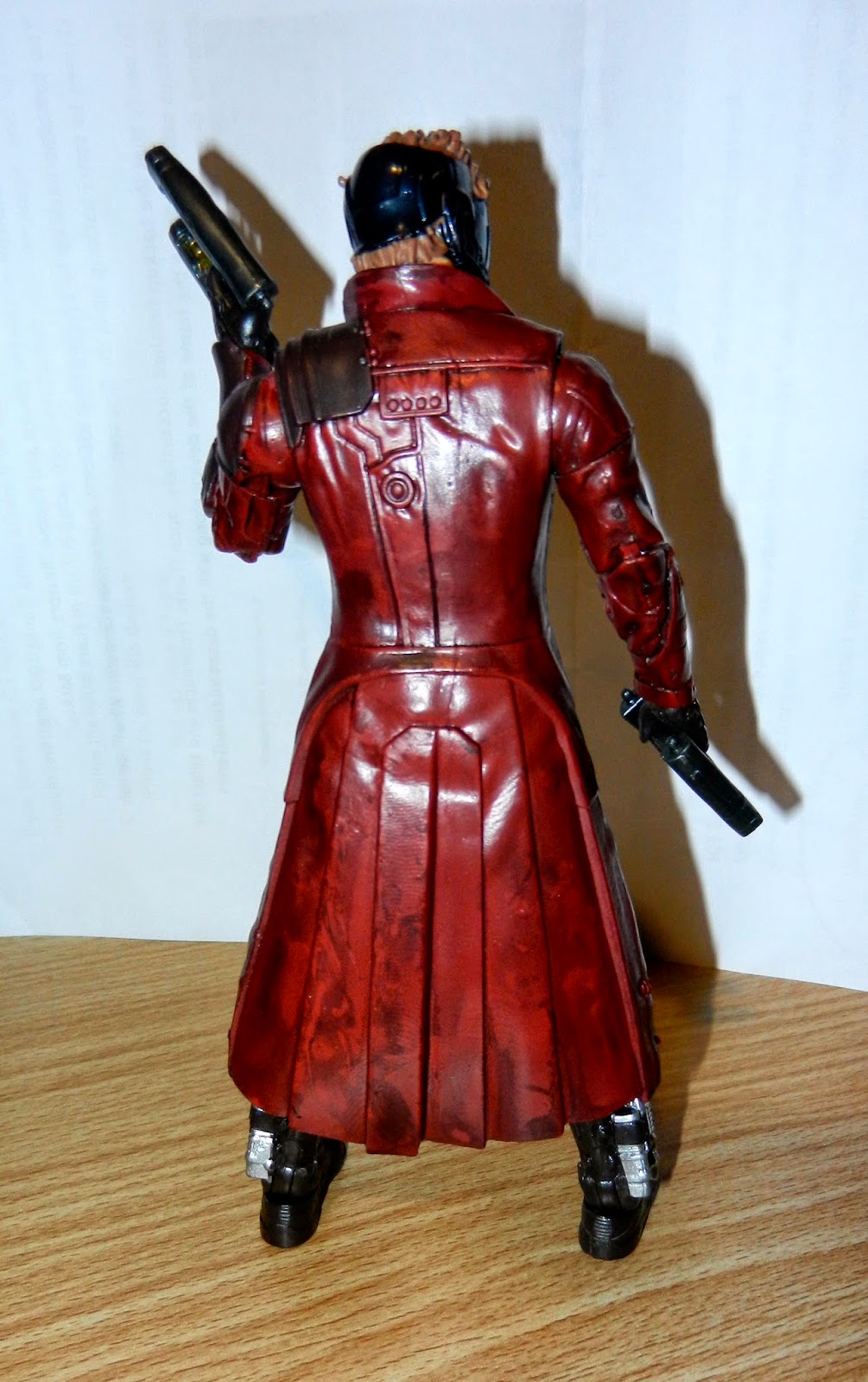 This might well reflect the first costume he wears in the movie, that opening sequence and the ‘Nova Corps police booking’ sequence seem to be the only times he wears this outfit, but he’s represented
well here. This is a fine figure with very satisfying accessories and will no doubt please a lot of people once the movie comes out. 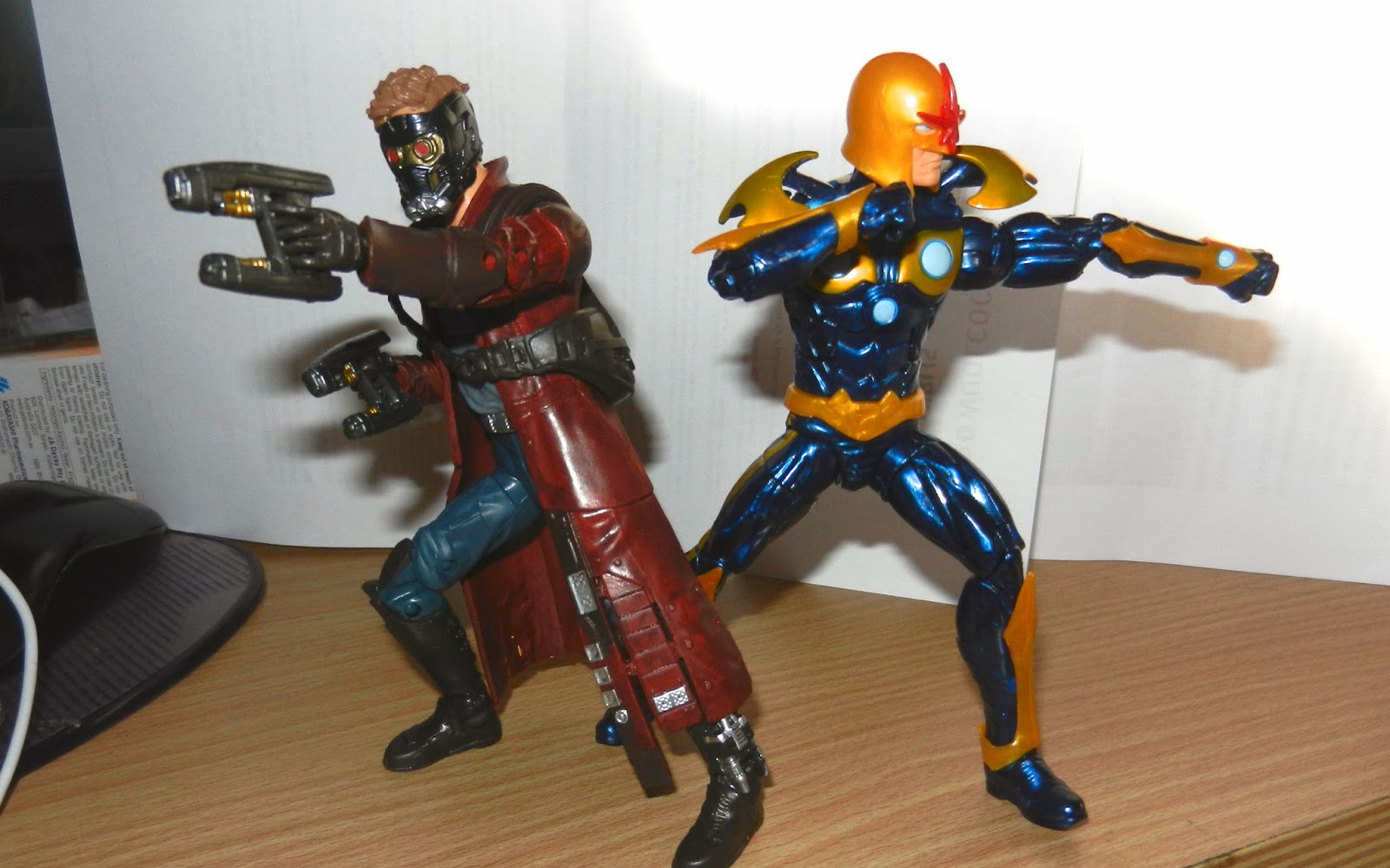 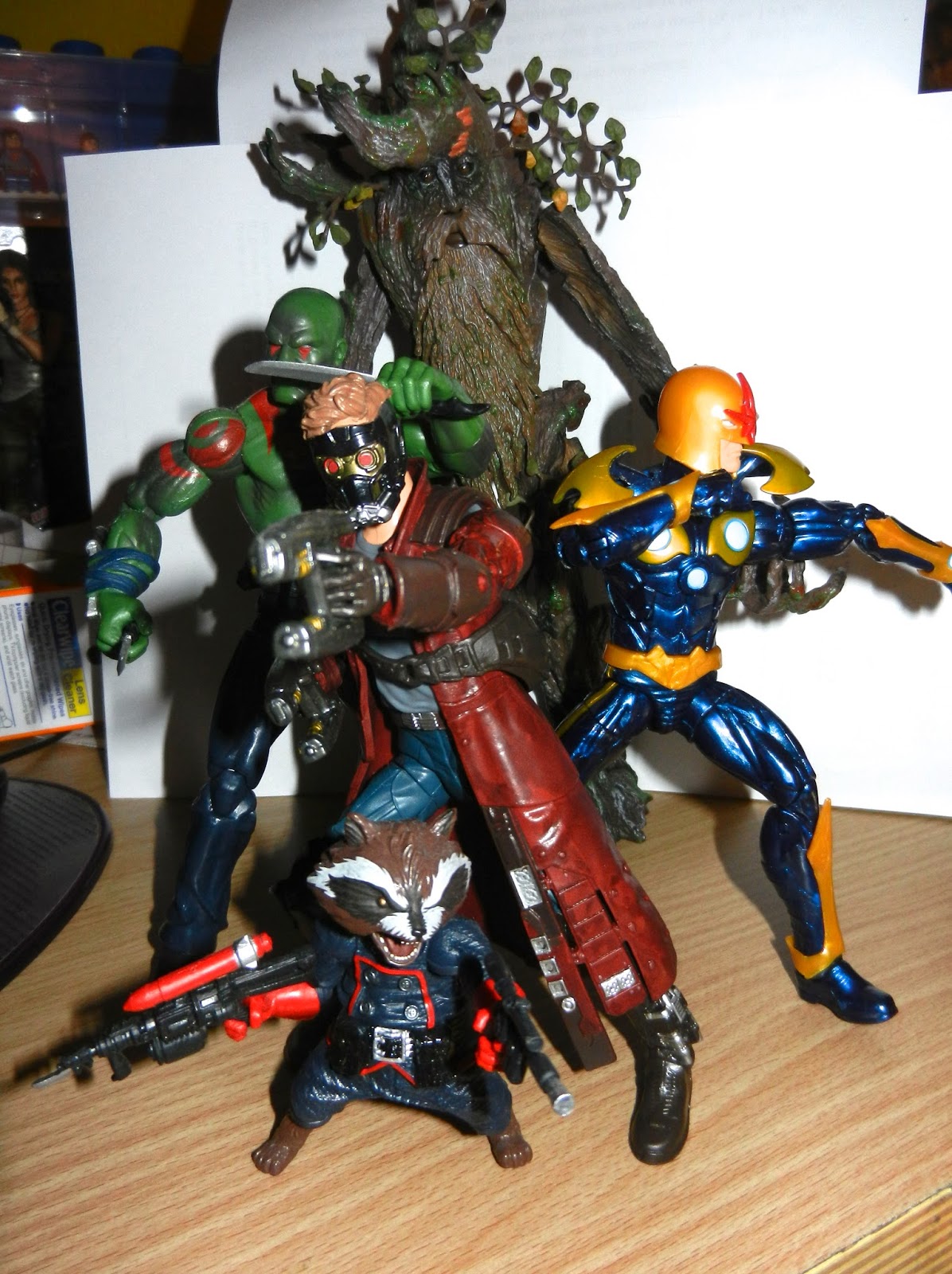 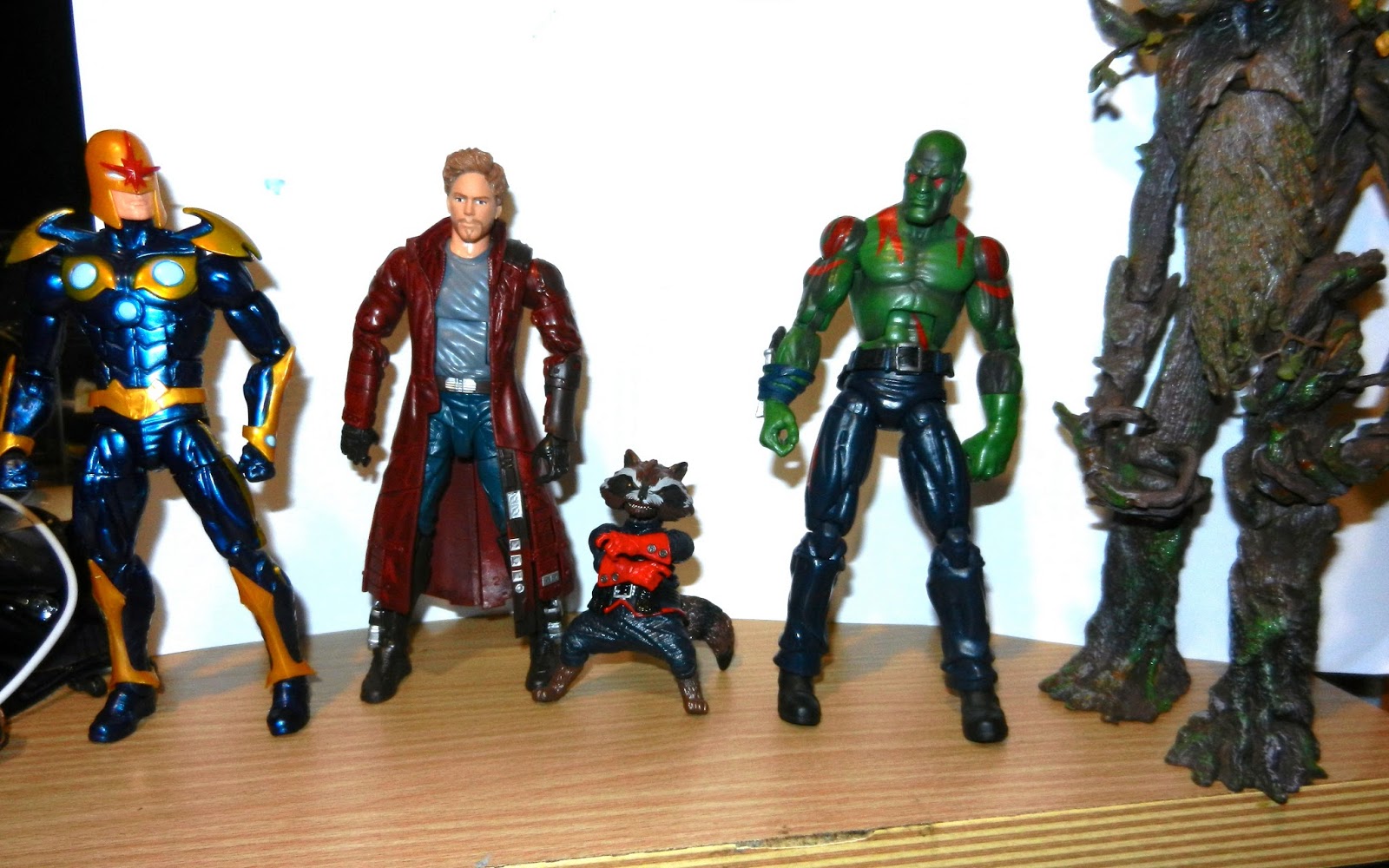 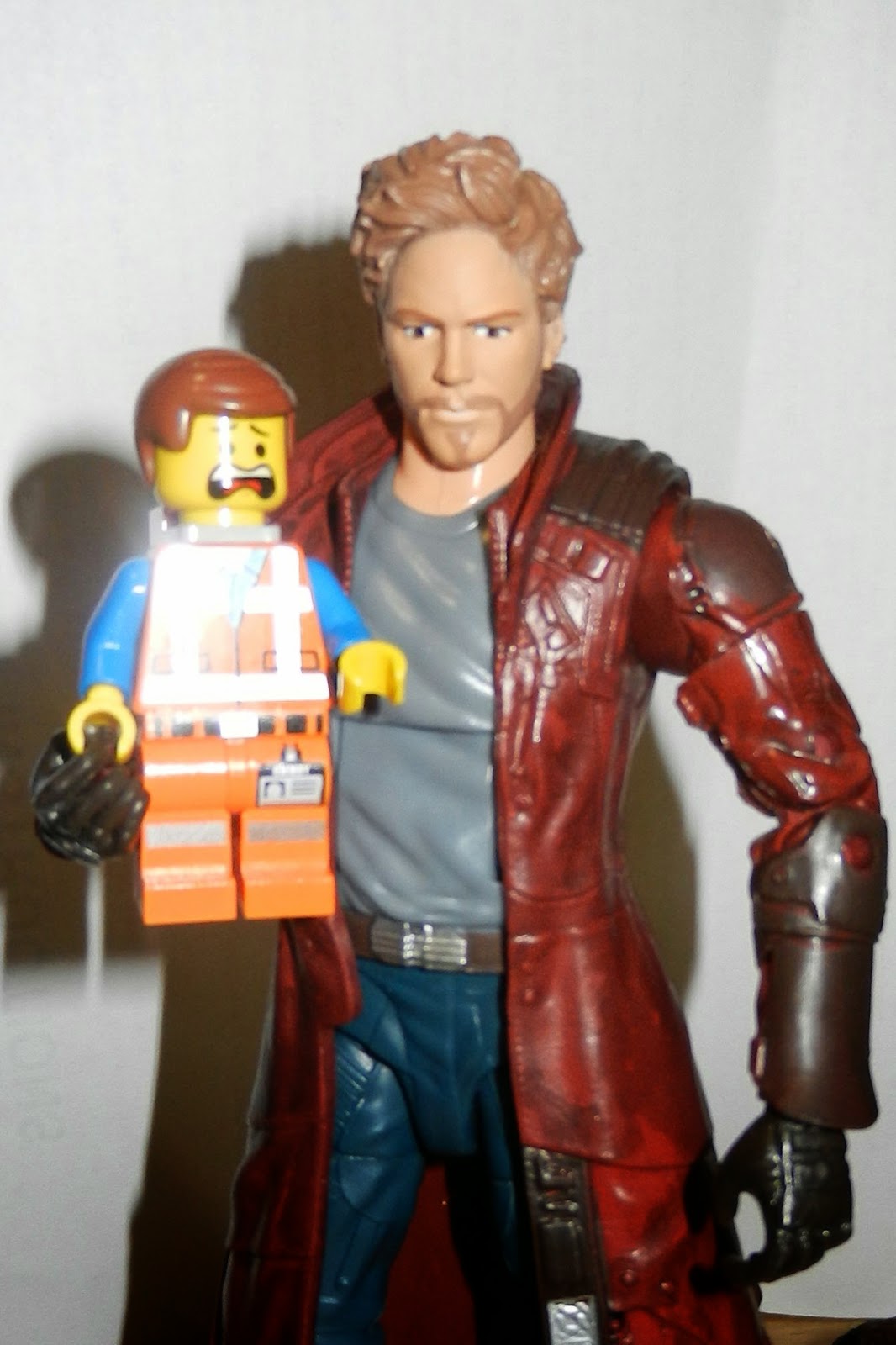