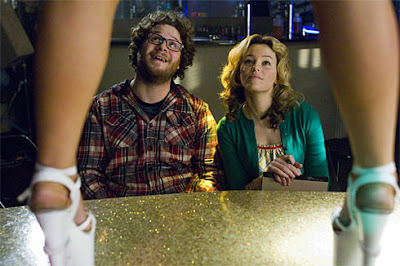 This is a nice short one. I actually became quite the Kevin Smith fan in the interim years between writing this and now, not so much his films but of the man himself and his spoken word material. I mention this because I edited out some of the more critical swipes I took at Smith. That was back at an age where I thought you had to be angry at everybody for no reason. I wasn't a teen. I was 23. So while this isn't the most insightful one (it's more insightful than the one on The International) it is brief...


My friends at work have a shit sense of humour. Fucking shit, in fact. (wow, right out of the gate) My friend Dave would tell me his favourite scenes from shit like Euro Trip and White Chicks (Google them, oh Christ). So when he told me that ZAMMAP was the funniest movie he'd seen in years, I wasn’t convinced it was any good at all. So after several of his recommendations I say to him, if you can pay for me to see the movie that's when I’ll watch it. So he lends me his copy of the DVD.

The film is actually half boys/young men film, full of dirty sex scenes and horrible language, and the last maybe third is classic chick flick, as you can tell, Zack and Miri, while old friends, love each other and are changed by their on camera love making. Zack runs home and declares his love through a bathroom door while Miri takes a shit, stopping momentarily for a full frontal nudity scene/jerk of scene (the Dutch Rudder) involving co-star Jason Mewes (who looks quite buff, healthy and almost unrecognisable since getting off heroin).

So, not as confused as it should have been as a blending of guyflick and chickflick, the comic book/Star Wars references handled better than i thought they would be considering that fanboy director Kevin Smith has them in almost everything he does, the film was reasonably entertaining and involving at some points, mainly due to the gorgeous and talented Elizabeth Banks, who was heartbreakingly in love with Seth Rogan in some scenes. She was very good.

Verdict: A movie that's entertaining enough, but very crude (the dialogue is fucked up, and a guy gets shat on by accident, and the shit has bits of corn in it, also, they say 'cunt' like 35 times) (I used to say things like that as warnings to my rather squeamish friend) Elizabeth Banks is very good and, while it defied my expectations, ultimately it's a not entirely essential viewing.