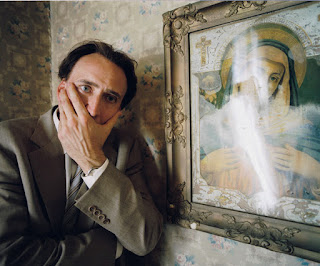 Terry's path into depravity and debauchery began with a jump into murky Hurricane Katrina floodwaters. This selfish act to save a drowning man leaves Terry with a permanently bad back and an addiction to painkillers. A year later we join Terry in his downward spiral into oblivion. And this is where Werner Herzog’s Bad Lieutenant truly begins.
Bad Lieutenant a compelling character study of a man who wavers between good cop and outright criminal as he struggles with the case of a massacred Senegalese immigrant family. His day to day struggles make fascinating viewing with both Herzog and Nicolas Cage creating a complex character of both unreserved honesty and desperate deceptiveness. Cage imbues his Terry with manic intensity, while applying breaks here and there to show subtle virtuousness in some small acts. Arm in arm we go with him, down into the depths. The long-faced craziness that many audiences have come to expect (and have derided him for) works in Cage’s favour; late-career Cage is exceptional in roles that suit him, like Lord Of War (2005) and not in fare like Ghost Rider (2007).
The supporting cast also give great performances. Eva Mendes takes the familiar and at times thankless role of the ‘hooker girlfriend’ and gives it some depth and gravitas. Val Kilmer is good in his small role despite his current place in the movie scene at the moment. I speak of course in regards to his straight to DVD work he’s been doing of late, in fact I’d caught another corrupt-cop-in-post-Katrina-New-Orleans film, it was called Streets of Blood (2009) and it was a mishmash of Training Day (2001) and Street Kings (2008) and it wasn’t very good. Bad Lieutenant was a straight to DVD film here in Australia, and if it weren’t for some slick direction from Herzog and some fine performances, you’d be fooled into thinking it actually was. It’s interesting to see Cage and Kilmer on screen, two contemporaries, and both are making b-movies though Cage is still getting his theatrical releases. In fact, this stands as my only real dislike of the film: the damn name of it. It makes me cringe to say it. The linking of this with an older, Abel Ferrara directed film, does the film no favours due to comparisons and fact that the name doesn't roll of the tongue particularly well. The straight-to-DVDness to the name of the film no doubt turned people of a fine film and a strong performance by Cage, which is a shame.
Another surprise is Jennifer Coolidge as Terry’s stepmother Genevieve. I’ve seen Coolidge play the same high-voiced ditz many times, from an episode of The Closer, to MadTV to American Pie (where it all started) and it was very pleasing to see her play an alcoholic who drinks in spite of her husband, who’s recovering from his addictions and going to AA meetings. In addition there are sleazy drug dealers, Brad Douriff being fantastic and this one customer of Mendes that’s outrageously and satisfyingly over the top as he is douchey. 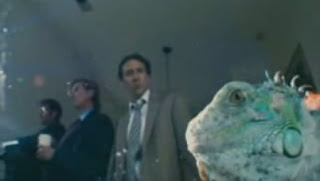 Herzog fills his film with a healthy dash of drug-fuelled weirdness. In particular there is an enduring lizard motif that pervades the film, from a club called the Gator’s Retreat (where Terry robs patrons for their drugs), to two singing iguanas to a brief and beautiful detour Herzog makes at one point with an alligator by a roadside crash. To aid this is the sporadic score, which wavers from quite pedestrian at times to all out inspired weirdness, sometimes in the same scene.
Ultimately the film is about right and wrong, about doing the right thing at the right time. Terry’s redemption and damnation coexist in small acts of kindness that reminds us that he’s still human, that there is a good man under the muck. These moments give Cage’s Terry enough complexity and depth, an also unpredictability, that we the audience follow him relentlessly. We relish in his hedonism and debauchery, we cheer at the honesty he displays in his outbursts, we’re warmed by his kindness. So much are we invested in Cage’s career-best performance that we want the best but fear the worst, and to Herzog’s unconventional, shameless and audacious credit, he gives us an ending we all secretly hoped we’d get but never dare expect.
****stars
Posted by Unknown at 15:29