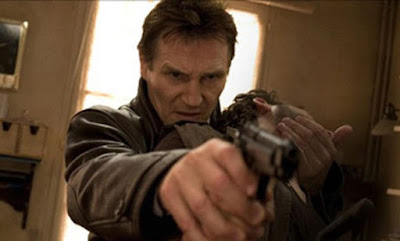 This is one of my favourite reviews. It reminded me of the work that Scott does over on Cinema de Merde: a review of a bad movie but with a closer look, to find something interesting under the morass. It had some interesting insights that I haven't really found in other reviews of the film. It's also one that made me laugh most. Again, I was young, so please take that into account.

This movie is crap. Let me say this first and foremost. Shitty performances and shitty dialogue, but I didn’t buy the DVD for that. I wanted balls-to-the-wall, bone crunching, back of the head shooting brutality. And that's what I got.

Taken was released ages ago here but is just getting screened (at a much lower rating and to lot's box office returns) in the US. IT tells the story of ex-CIA killer Bryan (Liam Neeson) trying to find his 17yrold daughter Kim (Maggie Grace, aged 26) in Paris after she is kidnapped by dirty, dirty Albanians who intend to sell off her virgin pussy into prostitution. Like most revenge films, it's all about how the system fails, is run by the corrupt, and only vigilantism is righteous.

My problems with the film? It takes 25 (!) minutes of padding bullshit before Kim starts to get into danger, but when the violence comes it's as brutal as it is righteous. Is Liam Neeson and American or an Irishman? His accent is the same for every film I’ve seen him in. I have no idea. And I’d want to sleep with Maggie Grace a whole lot more if she could act.

This idea of 'getting what they deserve' got me thinking of sex and virginity, of sluttyness and celibacy in the film. Kim is travelling with a (seemingly) promiscuous older party girl, who tells her that she should loose her virginity in Paris, and that she 'has to loose it sometime' (as opposed to 'lose it with the right person, at the right time'), which makes Kim a little nervous. Her friend wants to sleep with a handsome Frenchman who they just met (and is a bad guy). Now, I’ve explained to you that some films have this subtext that girls who are slutty or just like sex are the ones who get butchered (eg. Gemma Arteron in Quatum of Solace) and the virginial girls survive. (Where I learnt about this kind of this I got from here. I had sent my friend the link. Thanks again Scott, you’re a big inspiration) It happens in horror movies; the girls who like sex die while the cautious virgin lives till the credits. The same can be said of this movie. What happens to the slutty friend? Neeson finds her tied to a bed, presumably raped several times and OD'd on heroin. His daughter? Sold to the highest bidder in this hooker auction because she's "100% pure", placing her in a position to be rescued, her virginity safe until the last minute.

So in this film, it's not revenge that makes Neeson murder half the Albanian population in Paris, nor does it make him shoot an innocent woman in the arm to force her husband to do stuff (AWESOME), or shoot a guy to death in an elevator, leaving his body to be discovered by party guests (AWESOME) or to stab the shit out of a guy with his own sick looking knife (AWESOME). No. On the surface this film is about his quest is to save his daughter from drug addled prostitution and damnation in seedy, dark Europe. But it can also be seen in a more direct and creepy way. See, after he rescues her from a dirty, affluent Arab who bought her (he shoots him mid sentence just as he says 'we can negotiate: AWESOME), it seems that the Arab stereotype paid that amount to pop her cherry and thus, with his death, her life, and her virginity are preserved. There is also a subplot where Neeson wants to give his daughter a karaoke machine for her birthday, but is scorned by his ex. She’s into horse-riding now, see, not a singer like she was when she was a child and when he still had custody. After the abuse in Europe he takes her home and gives her singing lessons with a pop star he was body guarding (Holly Valance), thus completing the circle: Daddy preserves his Daughter as his ‘little girl’, ensuring his daughter remains a sexless adult, unchanged by puberty and time.

FILM: Bullshit aside, I didn’t watch this for any other reason but to see people violently meet there end, with satisfying righteous violence. On that front it delivered. ***stars
EXTRAS: None 0stars
Posted by Unknown at 03:55