World War Z - Who Ruined This Movie? (The Momus Report)

I wrote about my annoyance regarding this film on my Facebook and my friend Emmet O'Cuana suggested I write a piece for his site The Momus Report. His email response was 'That was impressively even-handed'. The original piece can be found here.

I am not a purist

Or at least I’m trying not to be these days. 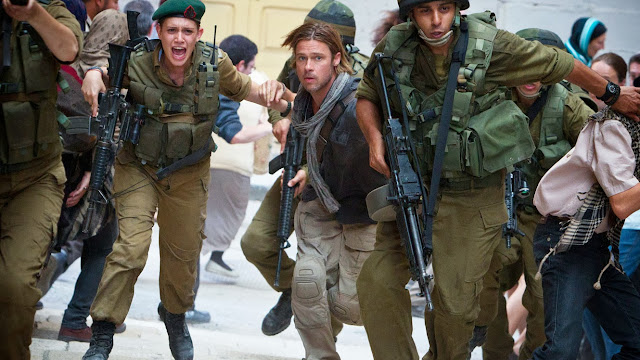 After having witnessed the North American reaction to Snyder’s Man Of Steel, the attitude of the ‘purist’ and wanting a production to go ‘your way’ and not the way of the filmmakers is a trend that I have noticed amongst comic book and movie fans alike. People cry about how Superman is rebooted in a way they haven’t seen before, that film's portrayal of him is out of character. The interpretation people seem to want most of all was already done with the Donner/Reeves films. An attempt at imitation of those films lead to Superman Returns; this is 2013, and in an age of remakes and sequels, the best one can hope for is something at least unique and unexpected. We should try and see things for what they are and not decry them for how little they resemble what we want them to be. They are, after all, an interpretation developed by educated and talented people who know more about cinema and movie making than I do. So while I often criticize their choices, sometimes I’d prefer to defer to their better judgement.

Now, I know that this is meant to be a World War Z review. Here I am defending Man of Steel and I have not seen it yet. The reason I mention this ‘I’m better than the filmmaker’ attitude is that my dislike and disappointment with World War Z lies not at the feet of Marc Foster and his team, but with the studio and the audience the studio marketed to.

My dislike is not so much that I’m a zombie movie purist, as I’ve only seen a handful of zombie movies though I’m also an avid watcher of The Walking Dead. I even wrote and (kind of) directed azombie movie in university, but I’m not as much a stickler for the rules as other fans of the genre are. If it makes sense to the story, go for it. In a sea of similar films, give me something original, or at least something with a hint of originality to it.

So originality is what I thought I’d see in WWZ. As I’m not a zombie purist I wasn’t all that bothered by running zombies, even when they jumped. If the zombies were too slow, they would be able to be stopped in today’s society. A lot of these films deal with the overnight collapse of society, so the faster they are the more effective and believable this loss of infrastructure is. The book is a collection of anecdotal stories; difficult to shoot and turn into a coherent single story. So instead a story focusing on a man and his family was a safer choice.

But then you watch the damn thing. And you realise that the North American cut is the one they’re screening here in Oz. The zombies look like clean, clothed I am Legend monsters; the blood is coloured black/blue or omitted completely. A character accidentally shoots himself dead. The film is edited to the point of confusion. The opening Philadelphia carnage is a shaky camera nightmare, with moments of clear violence edited out. A crowbar is stuck in a zombie’s head while Brad pulls at it; he gets it free just in time to hit a zombie with the digital blood spray omitted. 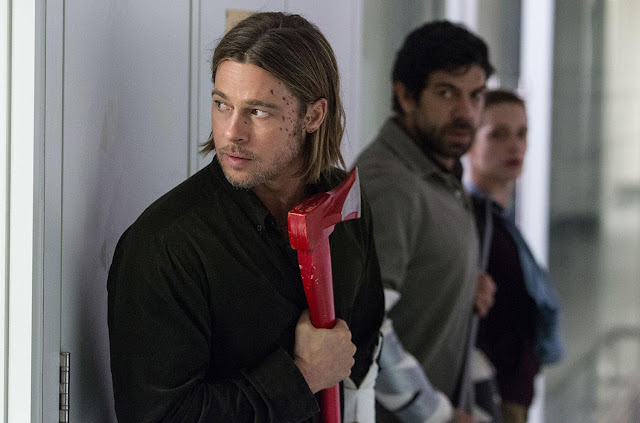 What makes it worse is that we can tell that the film is meant to be violent, with many visual cues suggesting more graphic scenes. A hand is cut off in a blink-and-you’ll-miss-it moment; a soldier kicks a zombie off a helicopter though his aimed gun suggests something else; an infected soldier shoots himself just out of shot with a cheesy looped line to clarify his intent. The violence in this is like a Bond movie sex scene – all the innuendo and flirting in the lead up suggests sex but all they end up doing is rolling around a bed and smooching, with penetration off-screen and assumed.

I again return to the concept of the purist. Many will cry that this film doesn’t have many of the elements (particularly the gore) that older, more respected films do. The unfortunate truth about WWZ is that there is evidence that its original cut, and the original intent of Forster and co., is probably closer to what the purists wanted.

With all the hullabaloo about WWZ’s disastrous shoot, the studio, nervous about recouping the $200 million it spent on the film, didn’t trust the millions of Walking Dead viewers to come out in force and support the movie so instead softened it for the kiddies.

This is entirely the studio’s prerogative. While I hated the experiences of seeing a kid-friendly hatchet job of a film (at 3D prices, I may add), I blame the C.O.D. playing 9-16yrolds, who for the past decade have become almost the sole consumers of blockbuster cinema. You know, the kind of kids who won’t watch a movie unless at least one character is holding a tricked-out M4 Carbine (which is most films these days.) It’s because of you this film was neutered, and I didn’t see the film Marc Forster intended for me to see. It’s because of you the dream of a big budget zombie movie was ruined and its because of you cinema today has been reduced to something you can handle as opposed to something that I would find entertaining.