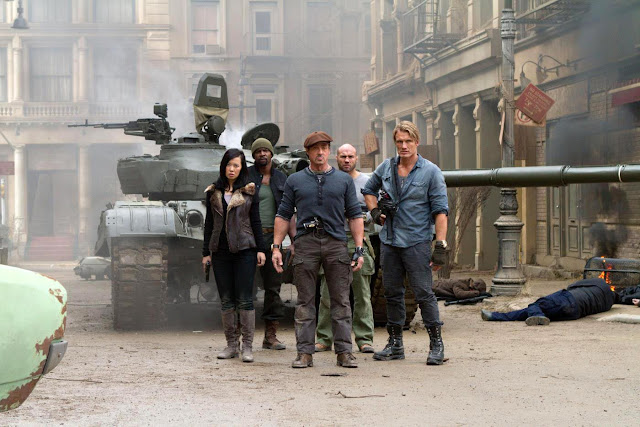 There was a moment that struck me as odd in Expendables 2: Chuck Norris’ character Booker is introduced by Bam-Bam (Sylvester Stallone) to his team: Hale Caesar (Terry Crews), Gunner (Dolph Lundgren), Toll Road (Randy Couture) and Maggie (Nan Yu). It struck me as odd because I didn’t know what Randy Couture’s character was called, and it surprised me that they all had character names. It spoke to the relationship that Expendables 2 has with its cast and its audience. Almost like in Oceans Twelve where Julia Roberts plays a woman who looks like Julia Roberts and impersonates Julia Roberts; we know we’re watching stars, not characters, and in Expendables the conventional elements of plot and character mean very little overall. We’re not here to see what happens to the team and who they rescue or defeat, we’re here to see the biggest stars of our youth clash on screen for our enjoyment, and that’s that.

I’ve heard Stallone’s second coming described something like this: no big star from the past has ever honoured his fans the way that he has. They wanted another Rambo, they got another Rambo. Another Rocky? Done. An assemblage of all the biggest actions stars in one film all rolled into one? Delivered. It’s that element alone that makes this film something special to me, that this and the first film were some kind of fulfilled promise made to his fans, and there’s something I respect in that.
It must be said: in order to properly judge this film one must eschew all upper levels of intellectualism, and to a certain extent, femininity, from one’s analysis. This film is made for men of a certain age, to engage and excite the more primal instincts one might contain. On this level the film satisfies.

So instead of analysing more of the complex performance or story nuances, we should instead focus on the action/violence content the film offers. In saying this, the film’s 2nd act is the weakest, the first delivering the amazing custom war machine rescue and the third act of course featuring the amazing airport finale. The 2nd act is too Liam Hemsworth-heavy, full of emotional monologues regarding his distant French love and the horrors of war. As schmaltzy as this is, when one considers that this is a classic action movie trope of setting up a character to kill, a rookie with a future, so that the old vets have a vendetta against their enemy. 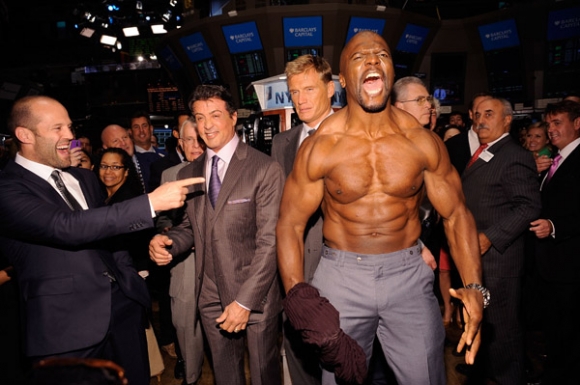 I was thinking about the elements of an 80s action movie, and in considering the accepted shittiness of the film’s quality the trope regarding the kid fits, as does the general lack of women and sex. Another old-fashioned move I’ve watched recently, Resident Evil: Redemption 3D, was clearly, like UnderworldAwakening 3D, a movie that was ten years out of date. The thing about movies that were made for me when I was a teen in the early Noughties was that they didn’t shy away from the fact that teen boys liked hot women. That’s one thing Redemption got right: Sienna Guillory and Milla Jovovich running around in sexy, albeit silly, outfits.

Expendables 2 has Nan Yu, who, while attractive and is the object of affection to both Stallone and Lundgren in the film, isn’t overtly sexualised, nor does she actively pursue a sexual relationship with any of the characters. This is very 80s in that the films had an underlying feeling of homosexuality in proceedings; mainly oiled, muscled men, with the women nowhere to be seen. In this film, Stallone chastises Statham for being too loved up with his cheating girlfriend (Charisma Carpenter) and Hemsworth’s girlfriend is distant and unseen until prior to the credits. In this film it’s all a guy’s world, men doing manly things, no chicks aloud, in a sense. It’s interesting to note the difference between what we liked as kids (80s-90s action movies) and what we liked as teens (00s garbage) comes down to the sexualisation of women. I dare say that as a little boy you not interested in girls, yet as an teen they’re all you think about, and there’s a generation out there who’s actions movies reflected this change to an extent.

The final sequence of the film, the airport shootout, is pure childhood wish fulfilment, with all the big players swinging fists and slinging lead. As fun as it all was however there was this sense of holding back. It should be over an hour long, everything should have been at least 3 times bigger and better. This is a big movie, meant to be the biggest ever, though at times you get that sense that, quality-wise, it’s only a hair away from being a straight-to-DVD movie. Part of that comes from it being largely filmed in Bulgaria, the new Canada in terms of cheap production values. By that I mean a lot of American shows are filmed in Canada; a lot of straight-to-DVD movies are filmed in Bulgaria. There must be some kind of rebate the country offers, as I know a lot of Steven Segal movies are filmed there, as I’m sure a lot of Van Damme movies are*. I suppose its suiting; as a final resting place for old actions stars, Bulgaria should host the film that brings all of them together.

I admit that I had a good time watching it, and that had something to do with my company, who laughed at all the right places and made the experience fun. I found in all this nostalgic fun a moment of melancholic reflection; Bruce Willis offers Stallone a beat up old plane. “That thing belongs in a museum” Stallone says, to which Schwarzenegger adds “we all do”, before they all smile and disembark. It was a nice moment, an acknowledgment of times past, of growing up and moving on. It’s a mature moment, one that said to me that the guys we looked up to as kids are now old men, as are we who worshiped them. It’s this scene that allows me to forgive Expendables 2’s more glaring faults. It also makes me want to give the film a big smile and a ‘thank you’ for keeping that childhood promise that was too crazy to expect.

*I had watched a bit of a movie called Day of the Dead, a remake of the 80s Romero classic. I thought it was filmed in middle America, where it’s set, or at least in Canada, where, in Smallville they made rural Canada look like Kansas. Nope, the whole thing was filmed in Bulgaria.
Posted by Unknown at 18:10