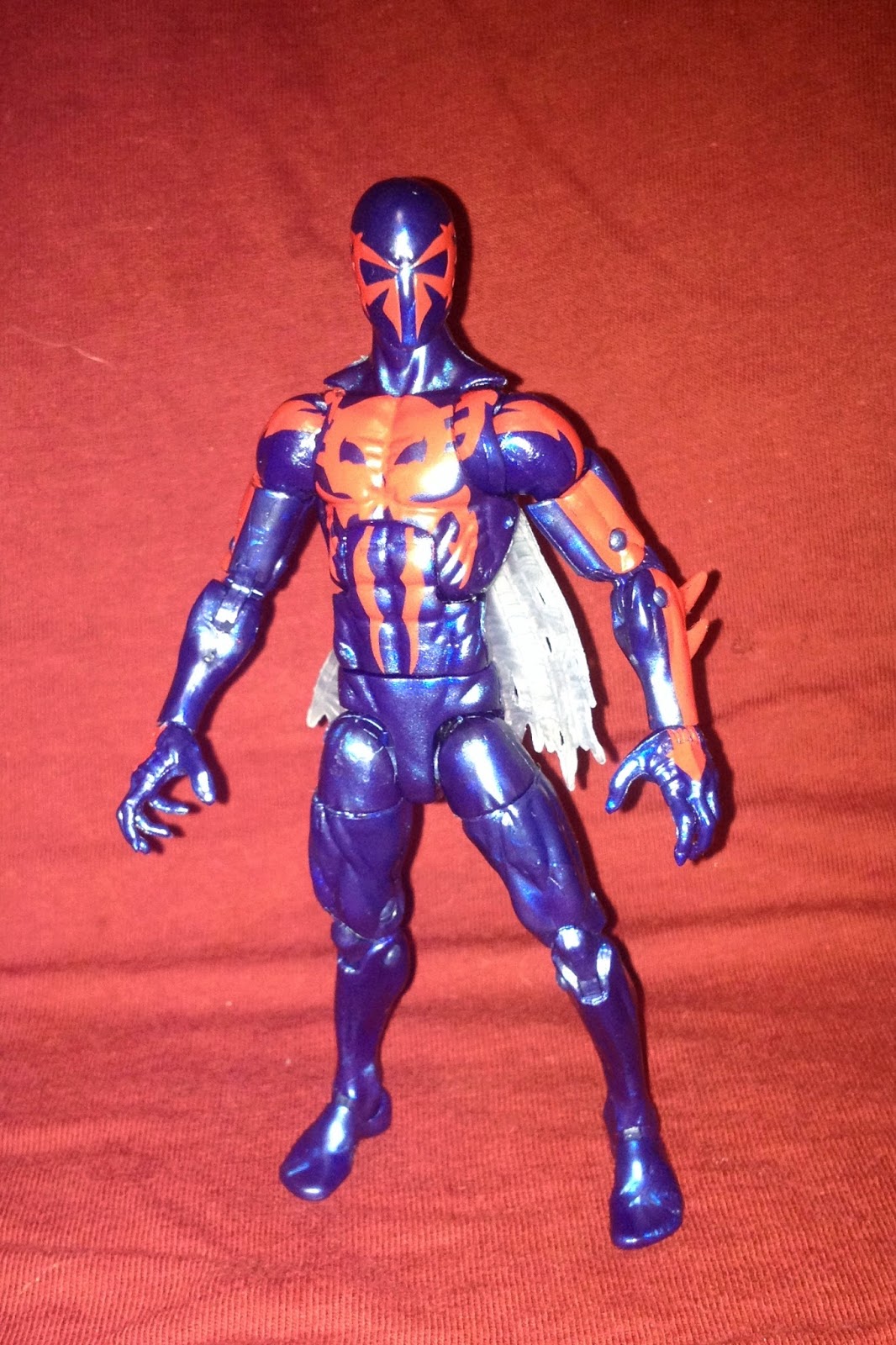 Spider-man 2099 was one of the earliest comics I remember reading as a kid and its always left an impression on me. Initially it was the art by Rick Leonardi, who also designed the iconic outfit, but much later in life I’ve found that I love the stories by Peter David also. While the dialogue at times can be a little dated, Peter David’s stories and characters hold up and remain surprisingly compelling considering some of the crap mainstream 90s comics were spewing out. Two of my big favourites as a kid were Spidey 2099 and hook handed Aquaman and David was responsible for both.

Miguel O’hara remains one of his better, and I imagine, one of his favourite comic creations, seeing as David brought him back with his Captain Marvel run and has taken the reigns with the current series. With an abusive Irish father, his headstrong Mexican mother, and the artistic brother Gabriel that his mother always favoured over him, Miguel didn’t have much to cling too growing up, his intelligence thrusting him into Alchemax Academy. This led to his successful career as a leading biologist for the mega corporation, and it was there that, due to the machinations of the CEO Tyler Stone and the sabotage of a jilted colleague Miguel’s DNA blended 50% with that of a spider. 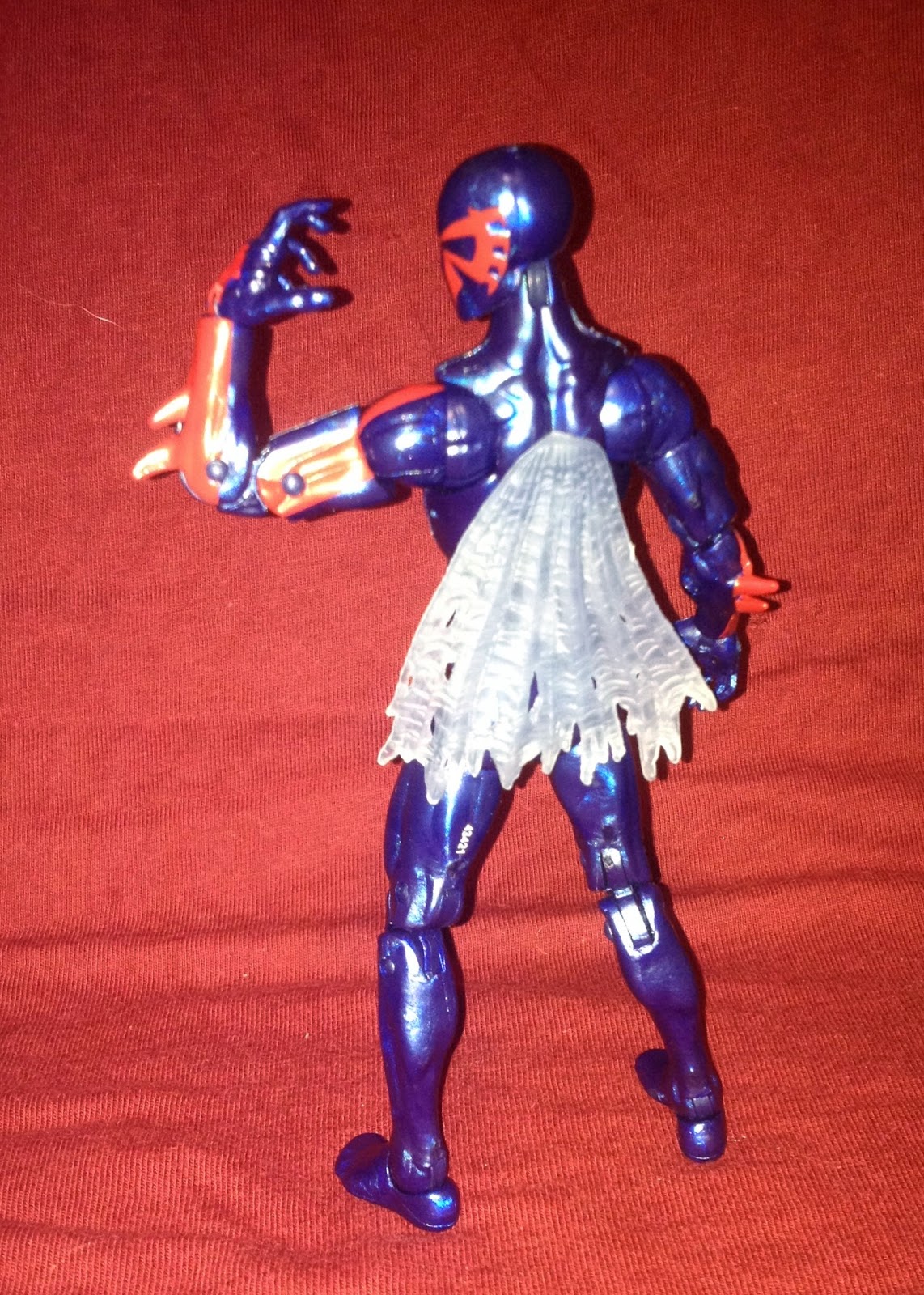 Miguel now had red eyes, natural web that fired from his wrists and retractable razor sharp talons that
extend from his fingers and toes. An unwilling hero and symbol to the oppressed, Miguel then accepted role of the Spider-Man of 2099 and became the hero we know today.

The iconic Leonardi-designed costume is one of my favourites, and it’s represented well here. It’s no wonder this costume makes it into every Spider-man game they’ve made. The red is crisp, and they’ve even added painted elements to the chest/shoulder hinge to complete the look. The figure is cast in a metallic blue plastic swirl, to give it a smidge of a futuristic edge. It gives the figure a nice visual flair, instead of a flat blue (the costume is actually described as ‘black’ in the comics but never, ever shown that way funnily enough). My only problem is that the red on the mask doesn’t hit the raised elements as perfectly as it should.

The sculpt has a lot of new elements. I thought he’d be exactly the same as Superior Spider-man, but he doesn’t surprisingly. His torso is new (as far as I can tell) and is leaner that Superior, the crotch is new as well. The forearms are sculpted with those spikes and his hands are new. His head features the raised elements of his awesome mask design, and while I like that its there it makes me want all the design elements to be raised to fit it, but I like what I got. The legs, by the way, are 100% Superior’s. 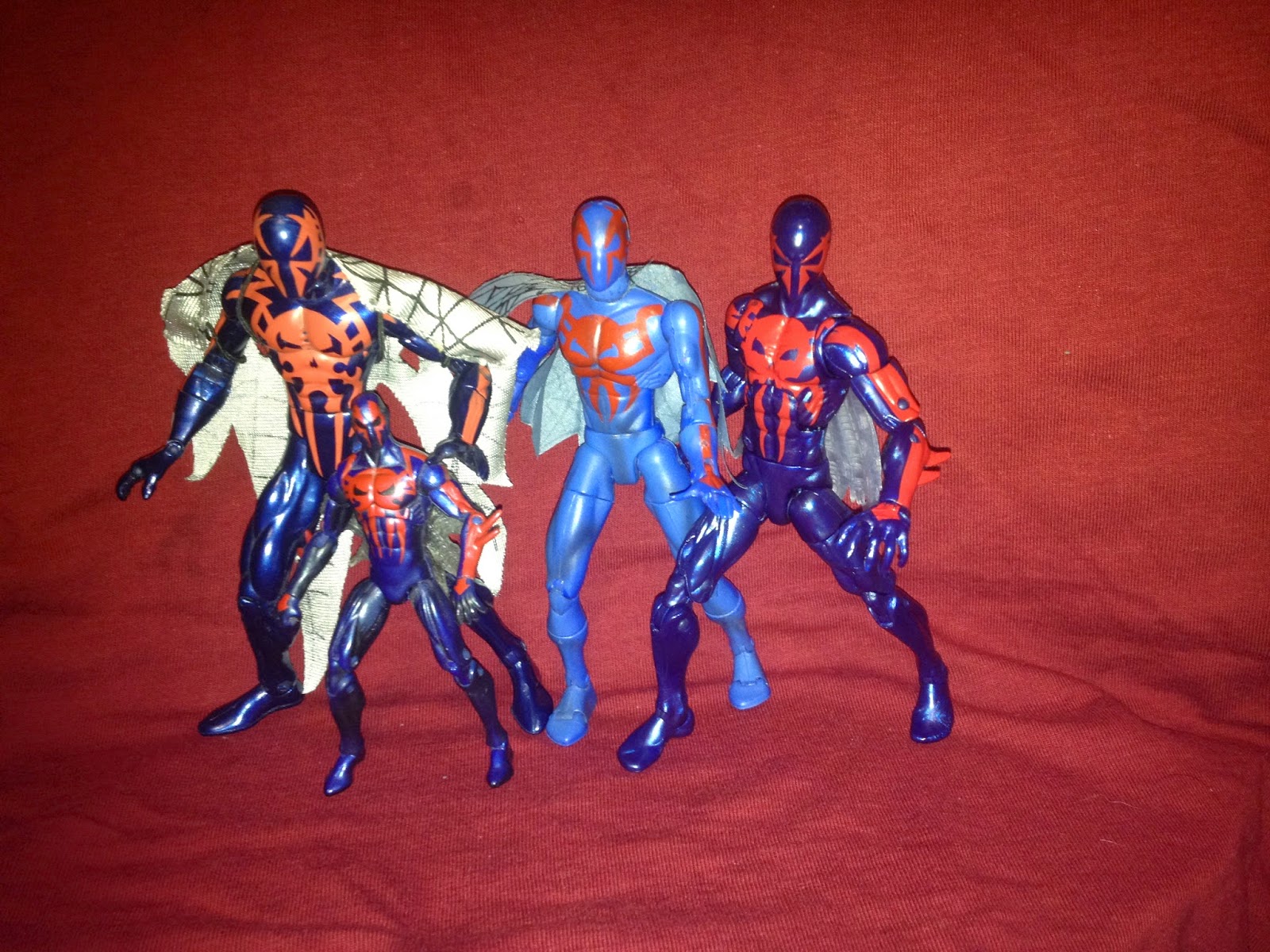 The only other accessory he comes with is his cape. In the comics when he first got his powers Miguel fell onto a glider containing a Thorite (a 2099 citizen which worshipped Thor from the comics). He accidentally tore some of the space age fabric off with his talons, and later added them to the costume as it allowed him to glide. My problem with the cape here is that its meant to extend and bit for gliding and its sculpted like it sits in a big clump draped down his back. It pegs in the back but it can fall out easily. 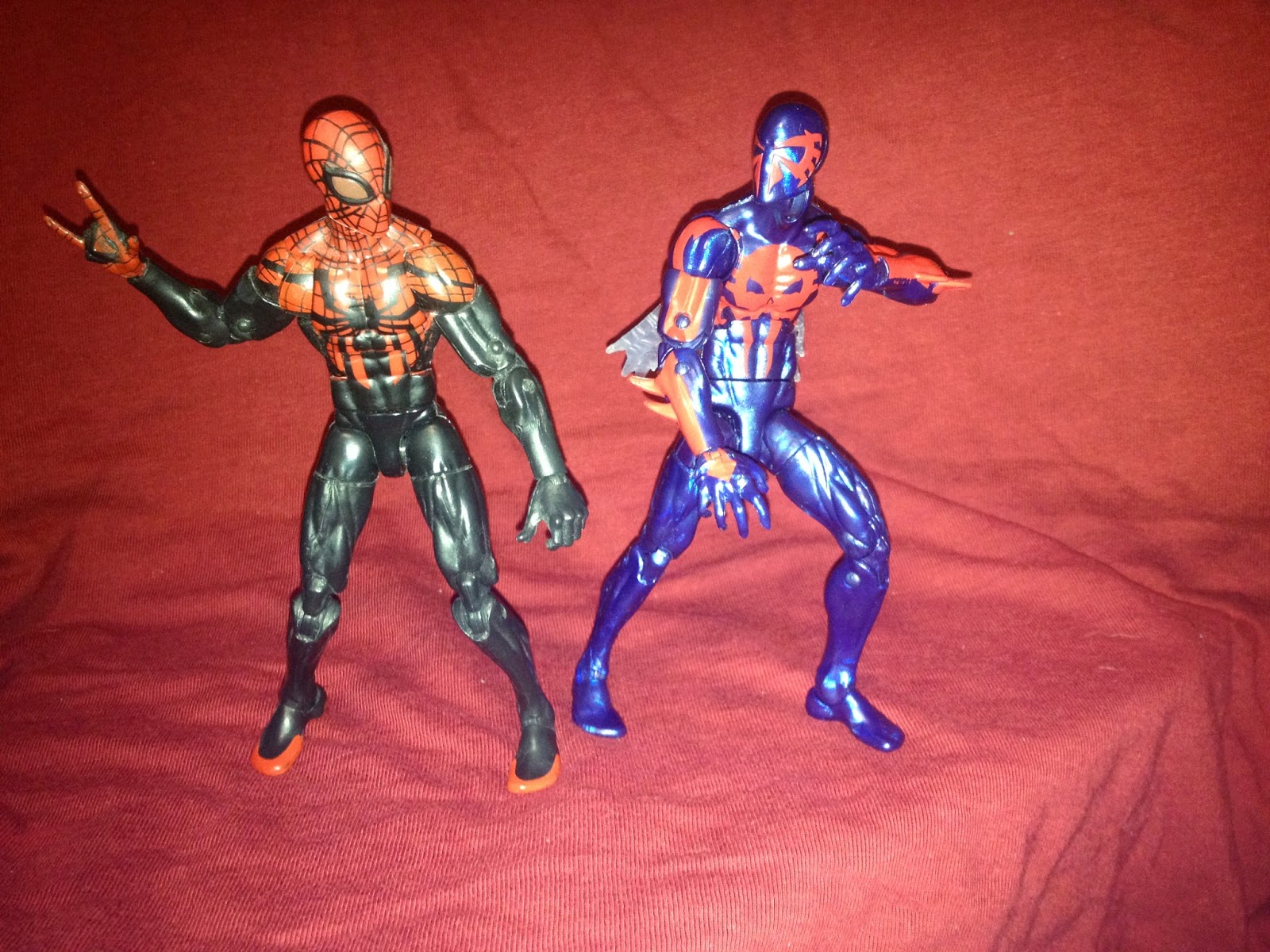 As I got this figure from the mystical far east, he was loose and out of the package. But normally he’d come with Hobgoblin’s right arm and flaming sword.

His articulation is as good as Superior’s and I think he’ll be something of a sleeper hit in this wave (though that Pizza eating spider-man will probably be the most popular. It looks amazing). He has a ball jointed neck, double jointed elbows and knees, he has a swivel chest joints and ball jointed shoulders. His wrists are swivel hinge as are his hip. He has a waist swivel, a great ab crunch (coupled with a great neck range that will allow for great poses) and ball jointed ankles with ankle pivot. All and all he’s fantastic. 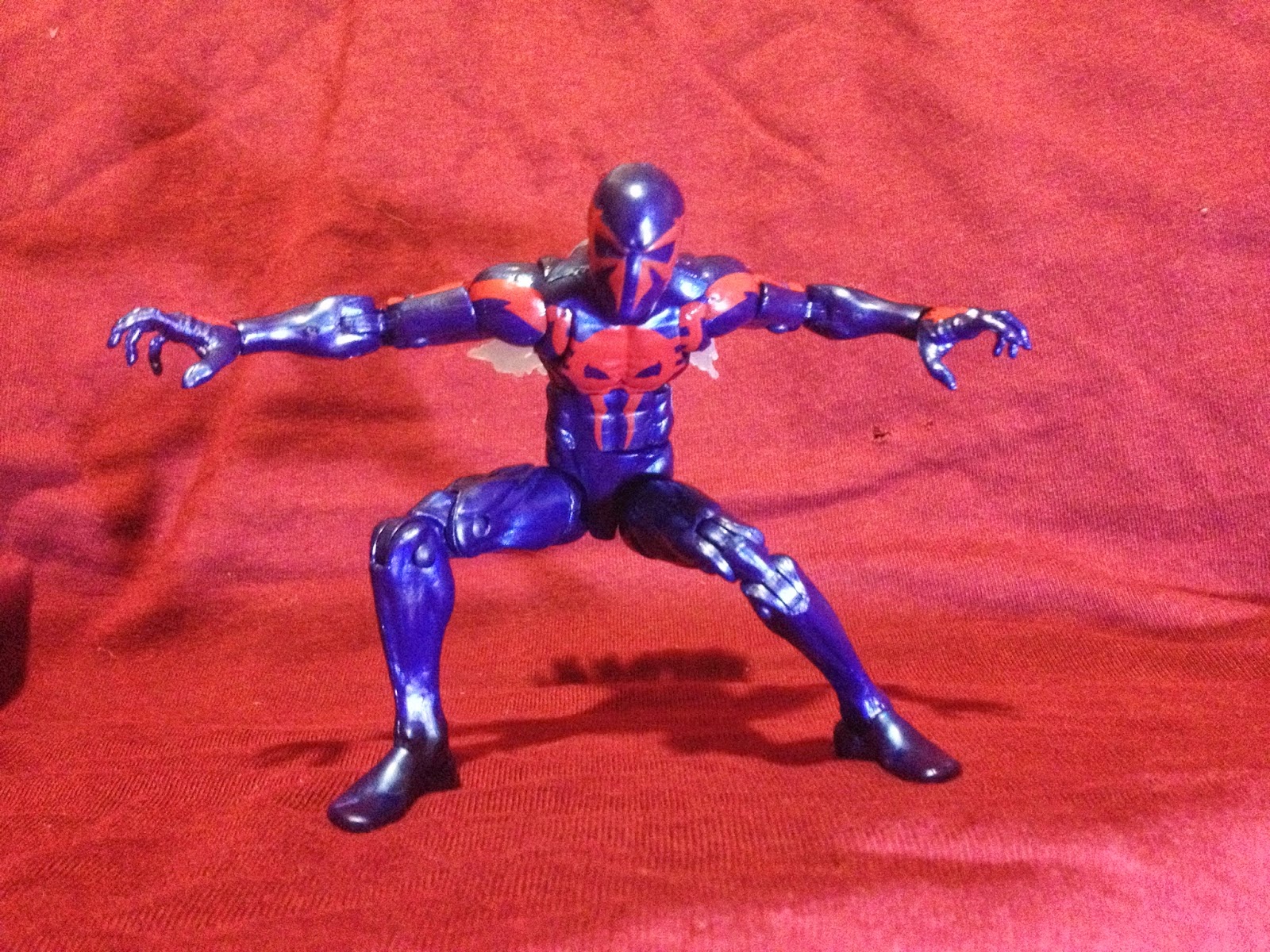 So I guess this is something of a milestone for me: this is the best Spidey 2099 figure. I’ve waited for a really good one, that Spider-Man classics one was a bust. But his articulation is great, his paint is cool and the sculpt it great too. I’d love a Shattered Dimensions version, what with all that sculpted fabric and raised elements, but this one will do perfect for now. 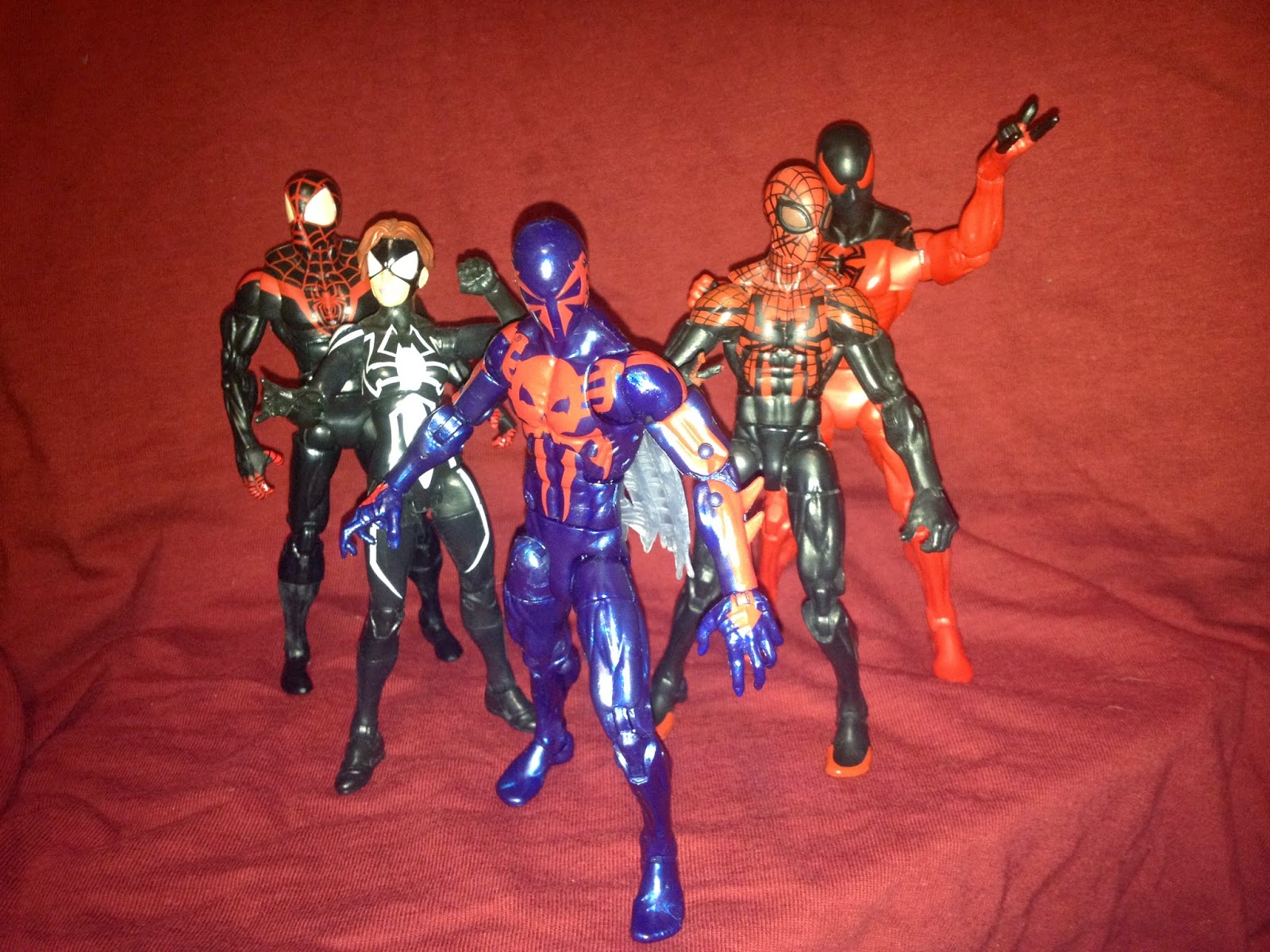 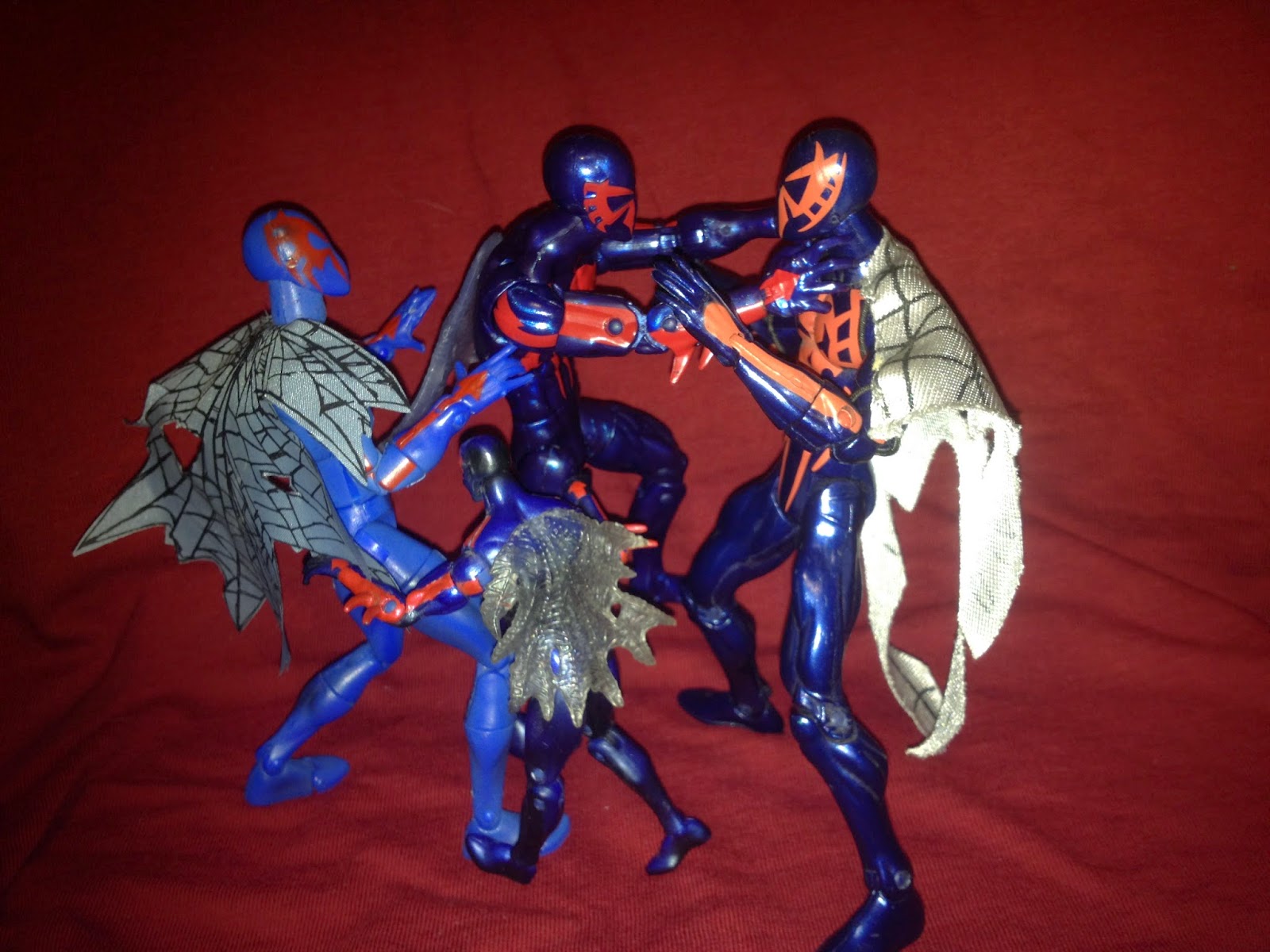