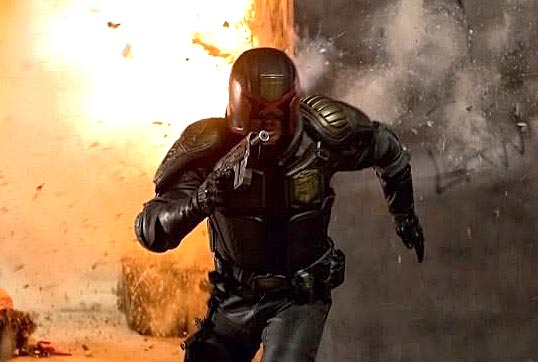 So my friend Josh has been raving about the new Dredd film coming out, with Keith Urban. As cheesy as it was, I still have fond nostalgic thoughts for the original Judge Dredd (1995) so I was have interested, half weary about a new Dredd film, what with this age of remakes and reboots. I was mainly in love with the 90s colourful Blade Runner style environment that was created, as fake as it sometimes looked, and seeing images from the teaser made me suspicious it would turn out to be (what Josh and I call) ‘Lo-Fi Sci-fi’, that is to say, a sci-fi movie that doesn’t transport you to a completely different context, because they film in uninteresting contemporary locations, most probably somewhere in Toronto or Vancouver. Think of the difference between the all encompassing dystopia of Blade Runner and the uneven, real world/crazy futurism dichotomy of Minority Report or The 6th Day. Let’s just say that the old Judge Dredd consisted of completely fabricated sets and environments, while they’re filming parts of the 2012 Dredd in South Africa.

Admittedly I’ve started to appreciate the location idea: Judge Dredd stories are set in a post-nuclear-war city, why wouldn’t the whole place be sun-drenched? But it wasn’t until the big trailer debut where my doubts really came to the forefront. The plot of Dredd is such: in the future thousands of people live in giant apartment blocks, one such block ruled by Lena Headley, a controller of a powerful drug. The Judges, police with the power of judge, jury and executioner, storm her building, battle to the top and attempt to capture her. 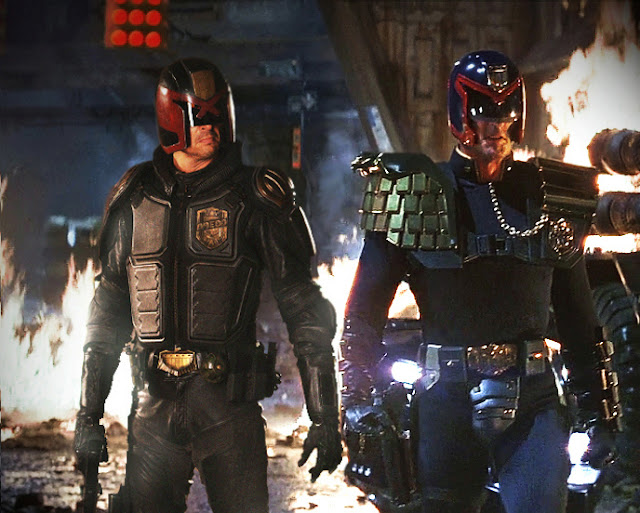 It was in this trailer where I found there was a huge comparisons to and Gareth Evan’s Serbuan maut (The Raid or The Raid: Redemption) (2012) come about. In both trailers, cops raid an apartment building, only to have the gang boss inform his criminal tenants that they must kill the invading cops. I know both films were created and developed independently of each other, and my friend Josh has insisted that trailers sometimes screw a film up completely. Some early-bird reviews have reassured me that the film is much better than it seems on paper, so while I’m now a little keener to watch the film (pictures like this make me excited) the comparison cannot be ignored.

But why is such a story so prevelant. As I said, both films developed independently (Dredd is written by the amazing Alex Garland, after all), so how could two completely different sets of moviemakers come up with the same basic story? I thought about some great foreign films I’d watched along the same veign: violent murder and chaos in an apartment building. And you’d be surprised at how many there are. Those films are Jaume Balagueró and Paco Plaza’s [●REC] (2007) from Spain, Benjamin Rocher and Yannick Dahan’s La Horde (The Horde) (2009) from France and the aforementioned Serbuan maut (The Raid or The Raid: Redemption) from Indonesia.

Lets start with a movie called The Horde. Oooh boy, is it rough. Imagine a combination of two of my favourite films from the past couple of years, Assault on Precinct 13 (2005) and Dawn of the Dead (2003). In this film, violent, corrupt cops raid a dilapidated apartment building to take out a drug lord (see the theme?). This time it’s over the death of one of their own, and of course, there’s a super race of shark-toothed zombies attacking the building, while Paris burns on the horizon. 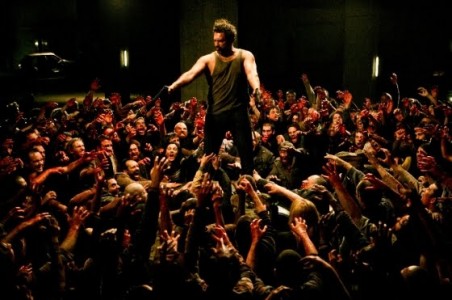 The characters are what make this for me. Low down and dirty gangsters teaming up with low down and dirty, violent and vengeful corrupt cops. Not a single soft character in the bunch, really, all vicious and all of them violent killers. It makes for some fun moments, there’s no pretty heroine, no handsome hero, just tough guys being tough, none of them sympathetic or relatable, just hard. It really is one of the most badass horror films I’ve seen, and if you’re a dude, like, a DUDE’S DUDE, then you’ll appreciate some of the badassery on display, involving one of the most brutal and heroic sacrifices in a Zombie film, ever.

Another zombie apartment building film is Balagueró and Plaza’s [●REC]. In this, a very good looking journalist (Manuela Velasco) and her cameraman tail emergency workers, who receive a call about an apartment building. Within they find a situation of escalating terror, where a viral zombie infestation has taken place, of which there is no escape: the police have sealed the place up, and anyone who breaks this quarantine will be killed (which they learn the hard way). This film was also made into an American version called Quarantine (2008), and eventually a crappy straight to DVD sequel. Despite it being a first-person camera perspective film, or found footage film, the Spanish REC films have spawned two very successful sequels and is very popular in that part of the world. 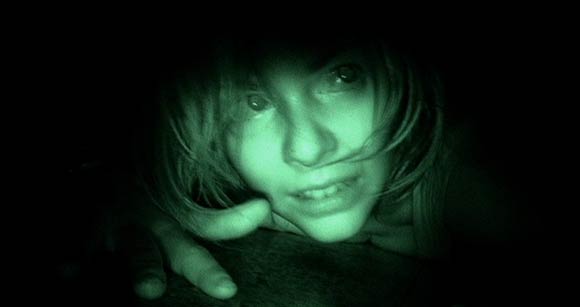 Oh boy, if The Horde was rough, this was more terrifying than brutal. One of the most adrenaline-inducing films I’ve ever seen, there’s one chase scene toward the end that’s full-on crazy. Though more in the vein of 28 Days Later, with blood spewing, red eyes and running zombies, the films makes great use of the camera conceit and the pace of its vicious antagonists. The night-vision sequence at the end is classic, and the whole film blends terror, dread and creepiness together into a great little package. I remember watching the film on my TV the first time; with the sound down, playing the computer a bit as well so I wouldn’t get too overwhelmed by it, like the pussy that I am. It was so much easier to stomach without the screams, haha.

And now we get to The Raid. I stumbled across the trailer once, and showed it to my dad, who is Indonesian. He thought it was great, but I never had any illusions that it would make its way to Australian shores, yet low and behold, it was getting some impressive international buzz and I took my dad out for Mexican and a movie.

The story is simple enough: a team of elite police raid a dilapidated apartment block to take out a drug lord. The inhabitants of the building are told they’d live rent-free if they killed a cop, and thus Rama, the plucky rookie, kicks a lot of arse as they battle floor by floor towards the penthouse. That’s about it for the plot. 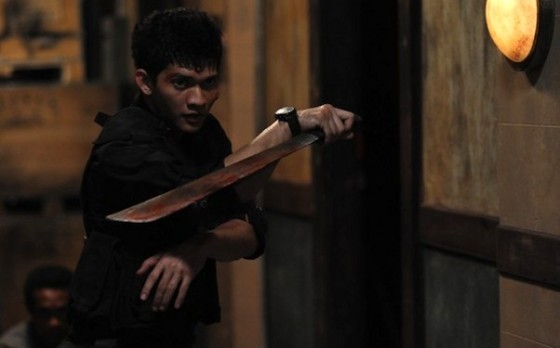 I have to say that the film was delightfully violent. I’m not really big on high violence, unless it’s against bad guys, then I’m ok with that. I know it sounds like a dumb contrast, but if you watch Rambo (2008), for all the violence against enemy soldiers there was, there were scenes of innocent people being machine-gunned and children being bayoneted, which was hard for me to stomach. This also marks the first time I’ve seen people walk out of a cinema because of the violence.
I’ve read reviews damning the film because of its tissue-paper-thin plot and weak characterisation. It doesn’t really matter to me, not in this film, especially considering the action and the entertainment is of a high quality. When you’re slapping your knee they way I was and laughing as loud as I was (much to my father’s embarrassed chagrin) it doesn’t matter as much as it should. Personally I was pleased at seeing an openly Islamic hero, who prays before a rigorous workout. I mean, yeah it’s a film from an Islamic nation, but in this post-911, post-Osama world, it’s good to see a sympathetic, heroic Islamic character.

Ultimately the film is very much like a computer game. I’ve always been aware of this when I watched an episode of the now dead ABC program Mondo Thingo, a pop culture program, where tey discussed videogame movies. It wasn’t just that they were making films of Resident Evil and Tomb Raider, but now films are being influenced by video games. To illustrate they simply played a clip from Once Upon a Time in Mexico (2003), where a handcuffed Salma Hayek and Antonio Banderas swing their way down the side of a building, the whole thing structured like an old Nintendo game. The Raid, however, resembles more a game called Die Hard Arcade, and reminded me a little of Time Crisis in its story as well, but that’s just me. 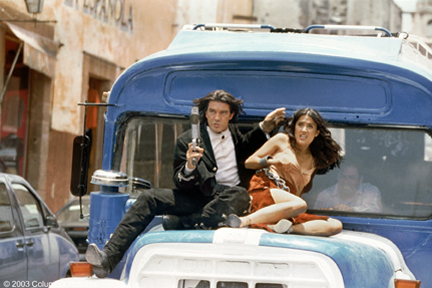 So perhaps that’s the most enduring influence on all these films, the Video Game influence. All films are in apartment buildings, all films have a constant violent antagonistic presence, and all films ultimately involve reaching the very top (or, in The Horde, the very bottom) to achieve some kind of conclusive end and all films have a level-by level structure to them, which explains the apartment building conceit.

So despite some imagery and plot conceits that both Dredd and The Raid share, idea that both films have their roots in gaming and video game structure has made the comparison a little easier to stomach. The whole situation reminds me of the Coldplay Plagarism case, where Coldplay was accused of stealing a song, though both songs were influenced by old Nintendo the Legend of Zelda theme. There is such a thing as two independent artists coming to the same conclusion. And here I am thinking that all these films were influenced by American pop cinema, when it’s the home entertainment that’s the real culprit.
Posted by Unknown at 19:27

Email ThisBlogThis!Share to TwitterShare to FacebookShare to Pinterest
Labels: Essay, On DVD, On the TV