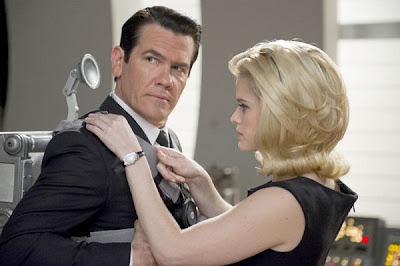 Old and busted. The new hotness.

I had a theory that if I went back in time about ten years and spoke to myself, what would I ask myself about the future of popular culture? “What kind of movies are people watching, what kind of games are they playing?” And I’d tell him “It’s all different. People are watching a brand new Spider-man film, and people are playing Diablo and Max Payne on their computers.” “Oh” my younger self will reply. Such is the nature of remakes and sequels, nothing really new is achieved, nothing truly original.

Without getting into a discussion of inter-textuality and how all texts are somehow related to one another on some level, I’ll just go ahead and talk about this week’s sequel Men In Black 3. In this Will Smith’s J goes back in time to save K’s (Tommy Lee Jone’s) younger version (Josh Brolin) from some kind of Scout/Hitman/Biker Boris the Animal (Germaine Clement).There's also Emma Thompson playing O, with the very lovely Alice Eve playing the younger version.

My first reactions to hearing about their making of this movie were pretty grim. Every film franchise, it turns out, needs a 60s Mad Men style version. At least with X-Men First Class they actually had a Mad Men cast member. It’s a sign of the times, of the tastes; after all, there was a period where every film franchise needed a Hong Kong action version, like Lethal Weapon 4 (1998) with Jet Li and Tomorrow Never Dies (2000) with Michelle Yeoh. I’d count the disastrous The Mummy: Tomb of the Dragon Emperor (2008), though that came out after the craze had passed, though it does feature Jet Li, but I digress. 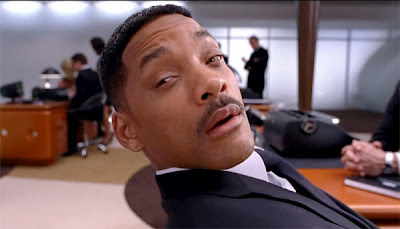 So we get a Mad Men in Black, complete with sharp suits and slick hair. While the greatest triumph of the film is its design (more on that later). But the one thing I was most concerned about in my viewing of this film is the performances. I love Josh Brolin, and he was as incredible as I thought he’d be, his impersonation of Jones was perfect. Will Smith was inconsistent, and it was interesting to watch him on screen after his sabbatical. He still has fans, and while his charm is significantly lesser than in the first film of the franchise, in my theater at least he still had fans and could still raise a laugh. It’s all in the eyes, you see. You can see that, with the exception, Brolin perhaps, not everyone in this film really wants to be here. There was those old scenes from the other MIB movies, where they use the neuralizer on the public and Will makes up a funny story to cover it. They do these here, but they really lack the fun of the older movies.

But while Smith at least tries, Jones is really flat. It’s one of those situations where I’d like to know what the mood on the set actually is, where that story would interest me more than the actual film itself. I remember once, and I can’t remember if it was for the first MIB or the second, but the puppeteer that performed those alien Worm characters was saying on Entertainment Tonight that he managed to make Jones laugh, and that this was some kind of achievement. I don’t know if this was some kind of comment regarding the tough-guy mystique that Jones had created for himself, or that he was miserable to be around on set. I’m starting to think the latter. 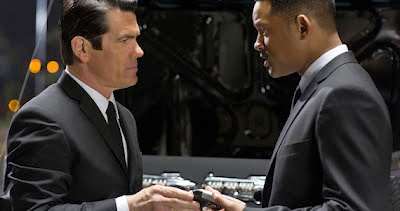 But it’s an alarming trend I’ve been seeing where the big stars just don’t try all that hard anymore. I know for a fact that Bruce Willis certainly doesn’t give it his all anymore, as evidenced by all his films of the past five or six years. Add to that the people that worked with him on Kevin Smith’s Cop Out, who all say he was awful to work with. I think I first noticed this kind of thing in when I watched that Tomb of the Dragon Emperor, with Brendan Fraiser. He didn’t want to be there, and it showed, and if he didn’t care then I didn’t care and the whole experience is just depressing and a waste of time. Its selfish on their part, actually.

But that’s not to say that this film is careless. The design is incredible. I love how the aliens in the past are all 1950s/60s sci fi movie style, like old fashioned Star Trek monsters, as opposed to the new monsters of today. And I love the 1960s MIB tech, the guns are all old fashioned, the neuralizer is either hand pumped or an actual large machine one has to lie in, and of course I love the single seater blade motorbikes, that looked great.

Something that made me think was a little odd was the treatment of race in this film, something that’s been addressed before with other reviewers. One review made mention of the fact that Wil Smith isn’t picked up on for being black in the 60s; that’s erroneous, many moments draw attention to it. And while it’s still very safely handled, at least they don’t ignore the fact that for most of the 20th century white men ruled. I’m not saying that’s a good thing, but it’s not like Captain America: The First Avenger where everyone accepts the Asian guy, the black guy, and they accept taking orders from a woman, and the only person they abuse is the scrawny white dude. No, that was a period of time when if you weren’t a white man, you were an oppressed minority, and that’s just how it was back then.There was also an incident when Brolin's K gets asked by his boss X whether a particular incident involved human casualties, suggesting he could care less about the aliens. This was a nice touch but never addressed again.

One thing I did take issue with was the Chinese restaurant scene, where J and K shoot up the place after looking through the kitchen to find gross live animals being cut up and served to guests. I suppose that’s the downside of using non-white characters in this way; too many people will see it as racist. I think the reason for the scene was expose those urban myths about the awful food practices of Chinese restaurants while making it gross and alien like the series normally does. But you can’t help but find it a little racist when a southern man grabs and Chinese chef and caves his skull in with an iron skillet, and only once the guy’s dead do we realize he had antennae and was an alien. 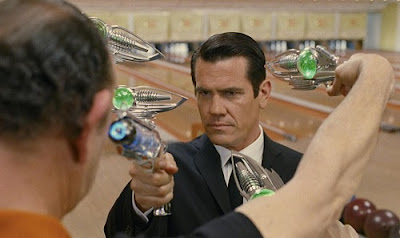 Overall it was a fun movie, and I had a much better time than I thought I would. For an incredibly paint-by-numbers film there were still very inventive set pieces and moments. The thing that stops this from being a great movie instead of just being an ok movie is that all important enthusiasm. We all know that you’re just doing this for the money, but still, make us think that you care and we’ll care with you. But as a popcorn movie, its worth having a look.

PS, i really just want a Brolin MIB movie, which i hope they do.