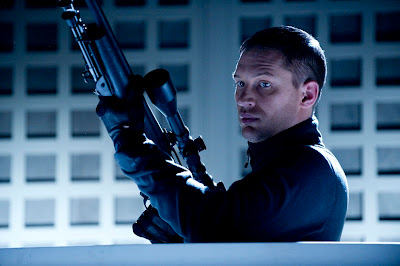 I love you Tom Hardy
Left with nothing to do but pass some time, I decided to watch a movie just to keep my current releases up to date. Do I watch Contraband? I already know that Mark Wahlberg will steal the money for Giovanni Ribisi, who’ll probably double cross them and he’ll have to rescue them and whatever. Safehouse? I already know that Brendan Gleeson is the villain from the trailer, like the twist is the bad guy is the bureaucrat that Ryan Reynolds is working for. The Killer Elite? A little  better, but the closest session was too far away. I will have to say that I seriously considered watching Tinker Tailor Soldier Spy again for the third time. Perhaps I should have.
My last choice was then This Means War. It contains two of my favourite leading men, Chris Pine and Tom Hardy. Reese Witherspoon doesn’t particularly impress me, I hadn’t seen a whole movie with her in it since Cruel Intentions, though I did watch a few minutes of Sweet Home Alabama. I don’t find her alluring or sexy, she’s a good looking woman to be sure, and a competent actress, but personally I loose my mind over her like the two characters do in the film.
I suppose that’s strike one against credibility in the film. The plot is simple: two spies end up dating the same woman, and compete to see who it is that gets her in the end. And there we have strike number two: I’ve never found myself in a position where I was competing for a woman with my best friend. I can say with some certainty that either of both of us would back off the girl for the sake of friendship. Bros before Hos, as they say.
My guard was down. I wasn’t expecting anything great, and really was watching the film to see Tom Hardy and what he does in a romantic lead. I’ve known about him for a while; having seen him in Star Trek Nemesis at a young age, I was wondering why they’d give such an important role to an unknown. He must have been talented, I thought, and he was. He was also in Black Hawk Down, but in uniform, in the dark with about two other young men that looked a lot like him, so its difficult to remember which one he was. Was he the one with the leg wound or the one holding him down or the medic fixing it?
There are a few Hardy films I’ve yet to see, one is Bronson and the other is Warrior, both of which I’m keen to check out. There came a point with Bronson, where he’d transformed himself into this hulking beast (which he’s done again for Dark Knight Rises) and I was under the impression that this is what he does now, big character roles where he changes his entire appearance. I have to say that he looks different in every role, and here, though he’s very normal, he looks nothing like he looked in Inception or even Rock N’ Rolla.
But I’m happy to announce that Tom Hardy is the greatest thing in this movie. It’s a great test for the A-list, as most big stars have to drudge through romantic comedies before they’re really big, so its good they’ll be an A-lister leading man that can really handle everything, from monstrous villains to handsome romantic leads convincingly. He filled his lovelorn character with charm and gravitas, and elevated the material somewhat. He even convincingly sells some awkward lines. It was great spending time with the character, and Hardy is deft with comedic timing. Just like in Inception he steals every scene he’s in. 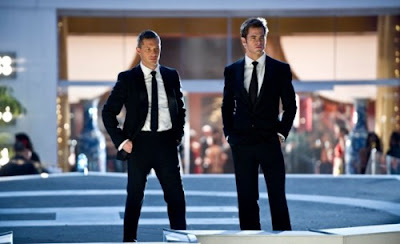 This Means War is no doubt a flawed film, but what struck me most is the tenuous relationship the film has with reality.  The main characters are called Tuck and FDR (?) and as I mentioned, if you can get over how two bros can fuck each other over you can accept the film more.  Pretty much every main character is a scoundrel, and makes horrible decisions; it’s difficult to find any kind of sympathy for the characters, with the exception of Hardy, for the most part. None of the situations or interactions ring true with reality, which is something I feel is a symptom of McG’s films. The Charlies Angels films were high camp, and Terminator Salvation, with its impressive spectacle at times, had characters and situations I found very difficult to relate too.
Perhaps that’s the nature of the game. The whole thing is a female fantasy. The same way a man watches a porno and fantasises that a powerful and satisfying sexual encounter can come so easily and with so many willing partners is as false and as fantastical as the idea that a woman, just by virtue of her being there, has two gorgeous men to choose from. I had also read that with romantic films the professions of the main characters were as if a teen imagined what they’d be like as an adult, devoid of the pressures and disappointments of reality. This film has that, Reese Witherspoon is a product tester that uses a flamethrower on frypans in a colourful lab, Tuck and FDR hit on models at parties before shootouts. That’s something I recognised from years of watching Alias: non-descript villains, terrorists or spies with no political or national connection to any real-world enemies of the west, attending lavish parties in foreign countries. Lavish parties are always a great way for the protagonists to dress up and mingle while hip music plays. It’s a strange, unrealistic conceit. There’s no building up of a legend for the spy to use, no months of intell and confidence work to move up through the ranks of a terrorist organization, no, it’s all Audi sports cars and nightclubs.
But there is something I noticed in Chelsea Handlers character. She has a large role as Witherspoon’s best friend and confidant, with strange, obscene (sometimes clipped) phrases peppered throughout the script. Handler is strangely wooden, but from what I’ve seen of her that deadpan delivery is her style. I imagine a lot of her lines were improvised, and it lead me to realise that pretty much the whole main cast is either playing themselves or playing characters they’re known for to an extent. Witherspoon plays possible the a-typical female romantic comedy lead typical of the post-Meg Ryan era. I think they cast Handler right off her show with little direction and Hardy seems pretty much like himself, which makes me want to meet him all the more, he seems nice.
But with Chris Pine you have a massive arsehole. I don’t think he’s a prick in real life, but he does play those handsome arrogant frat boy characters a lot. Whereas in something like the excellent Carriers his arrogant frat boy is given some depth, here he’s a prick all the way, and the film just confirms that happiness will always be bestowed on those who don’t want nor need it. 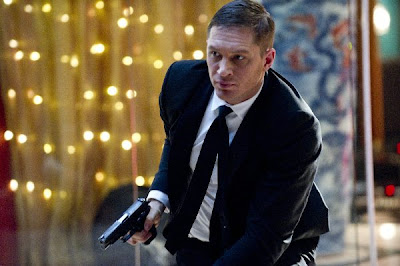 SPOILER
I suppose I should mention here just how despicable the characters are, in particular Pine’s character. He’s the lecherous douchebag who sleeps around, while Tom Hardy wants something long term and meaningful with a spouse, so he signs up for online dating and meets Witherspoon. Then Pine picks her up ina  DVD store. They all start dating and Pine develops feelings, despite the fact that his best friend bagged her first, in a manner of speaking. There’s one scene where he’s alone I his apartment and he gets a booty call from a hot Australian flight attendant, which he turns down because he’s developed feelings for Witherspoon. Add to that he fucked her when he said he wouldn’t. Then in the end it turns out that he fucked Hardy’s wife (with whom he’s had a kid with, broken up and reconciled) once in the past and that Hardy never fucked Witherspoon as we were led to believe, so Pine has smashed his dick into everything. A petty thing to take umbrage with, but when the whole film is about a competition between two men it’s hard not to notice when someone wins and another looses. The film then ends with them fighting. I’m reminded of Chronicle, where the character you relate to the most gets fucked over but the guy who’s a dick wins in the end.
It lead me to think again of the female fantasy. It is said that many women want to date bad boys because they think they can change them and make them monogamous, more into what they want them to be. I think the reason why Witherspoon chooses Pine in the end is for that reason. He’s a debauched ladies man, and she wants him faithful and committed, while Hardy WANTS commitment, has a son of his own and WANTS to settle down; there’s nothing for her to change or manipulate. A misogynistic thought perhaps, and I know for sure that I’m reading too deeply into something that’s not designed to be read into, but there you go. Oh, and there’s a point I was thinking in regards to people that, when they have a kid and break up, Middle America and Hollywood demand that they get back together and form a nuclear family again. Tuck cant have a child with an ex and start a new one with Witherspoon, that wouldn’t be proper. For a better explanation of that and how that’s annoying, read this.
SPOILERS END
So yeah, the film overall had some funny moments, some inappropriate scenes. And while the film wasn’t great by any stretch of the imagination, I didn’t have a bad time watching it, truth be told. That’s mainly because of Tom Hardy, adding the right level of engagement. I was annoyed when he wasn’t around, and wanted desperately for him to say “Everything the Circus thinks is gold is shit” into a reel-to-reel machine again and again (that’s a bit inside, but still). It won’t ruin your day to watch it, but it is strangely dark to an extent, what with all the strange, lecherous characters on display. And I have to say, even as a straight man, I’d let Tom Hardy kiss me on the mouth. I’m just saying.
**stars.
Posted by Unknown at 17:57